You are here: Home › Featured › General › Obama Establishes A New Islamist Government In Libya Paving The Way For The Muslim Caliphate And Armageddon

Obama’s government two weeks ago just shipped to Libya a new government via a boat. Now the U.S. and other world powers are prepared to help train and arm forces from this new unity government in Libya to supposedly help fight ISIS which has spread rapidly in the turbulent North African nation. As the L.A Times puts it:

The fledgling government, which arrived by boat from neighboring Tunisia on March 31, “is the only entity that can unify the country,” Kerry said. “It is the only way to generate the cohesion necessary to defeat” Islamic State.

“Government which arrived by boat from neighboring Tunisia on March 31”?

Whats next. Shipping governments via UPS and FedEx? The U.S. under Obama shipped the last revolution via Twitter to Egypt to only be taken over by the Muslim Brotherhood. But thank God for Al-Sisi it was put on hold, temporarily of course. Now we are shipping governments even Muslims are being shipped by land and sea.

The Muslim is smart. No wonder Erdogan of Turkey once banned Twitter.

A QUICK CRASH-COURSE ON LIBYA
Perhaps first a quick crash course on Libya is necessary to understand what we are doing there and how we got into this mess. It all initially started from an x-Gitmo detainee, the Muslim Brotherhood and Muslim terrorist Force 17, all unleashed by NATO. We extensively exposed this during the Benghazi fiasco. The United States then supported these scum-buckets to oust Qaddafi letting them loose to sprout causing all the mayhem in both Egypt and Libya where Obama aided the Muslim Brotherhood which is now parked in Turkey.

With Islamist help, the United Nations then through NATO had imposed an arms embargo in 2011 to stop strongman Moammar Gadhafi from securing weapons to quell the Islamist uprising against him. He was killed in October of that year. Everyone knows of the famous photo when Gadhafi was gored in his anus where Huma Abedin, Hillary’s assistant couldn’t wait to show her boss the gore photos.

So now there is no central government in Libya, let alone a national military force.

Turkey got involved in the Libyan problem with an approach that received support from the United States, Germany and the United Kingdom under the guise of “monitoring terrorist groups” (we all know what that means) and to supposedly “encouraging reconciliation talks” (see our urban dictionary above to know what that means) between the competing governments in Tripoli and Tobruk.

All this did was that in 2014, Libya experienced a second civil war that left it with two rival governments: one was Islamist-leaning, the General National Congress in Tripoli and western Libya, and the other secular: the internationally-recognized House of Representatives in the city of Tobruk in eastern Libya.

This new GNA government that was shipped by boat on March 30, 2016 arrived in the Libyan capital of Tripoli where the Islamist have a high majority. This new shipped group of Libyan lawmakers are led by a novice politician named Fayez al-Sarraj who had previously been based in Tunisia. The GNA was the result of UN efforts to supposedly find a resolution between the warring factions and to create what they call “a unity government”. The principle obstacles to the success of a unity government continue to include concerns about GNC politicians’ links to Salafist militias and demands by GNC allies to exclude Libyan secularist Army General Khalifa Haftar, the Tobruk-backed former Qaddafi loyalist, from the new government. What further complicates the struggle is the presence of the self-proclaimed Islamic State ISIS established in several coastal areas and cities.

General Haftar was the one who wanted the Islamist out. He began Operation Dignity with an initial focus on attacking Islamist militant groups in Benghazi which is countered by an alliance of Islamists and militias which formed Libya Dawn. The conflict pits the Islamist Libya Dawn coalition, which controls Tripoli and much of western Libya, against the Dignity coalition under Haftar controlling parts of Cyrenaica and Benghazi in eastern Libya. Each coalition had its own self-declared parliament and government, as well as nominal military chiefs, and faces further internal fragmentation and divisions among different groups.

Then we have Ansar al-Sharia—the Libyan terrorist group responsible for the U.S. consulate attack— and the Islamic State, which has gained significant territory in Libya. Taking advantage of the widespread political instability, jihadists are using the country as a hub to coordinate broader regional violence and launch attacks.

So not only do we have ISIS to worry about, but this injection of weapons to the GNA by the U.S. is likely to amplify factional rivalries even further.

Haftar wants to completely dismantle the Libyan branch of the Muslim Brotherhood, as well as what he considers to be any other Islamist terrorist organizations within Libya. Logically he should be the ideal U.S. ally but he is not supported by the U.S. and instead the U.S. supports the bad guys, as usual these days.

So in summary, the NATO powers that got rid of Moammar Gadhafi and prevented him from arming, then installed the pro-Islamist government which was unanimously endorsed by the United Nations Security Council. This Tripoli government of course got the support of Turkey. 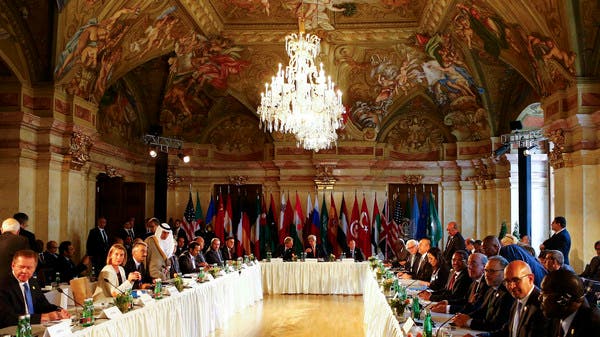 20 Vultures from 20 nations in Vienna discussing what to do about Libya. Notice the ceiling with angels.

Now comes the U.S. madness. One would think that the U.S. should support Haftar. No. Just as they did in Syria and in Egypt, the U.S. is supporting the Islamists. John Kerry argues that acceding to a GNA request for arms and training is imperative to help restore order to the country (which they messed up in the first place). The GNA which Kerry supports holds the bulk of the Islamists which is in Tripoli; the rival secularist government is in Tobruk.

Kerry said that the U.S. government will now support for training and equipping the presidential guard and vetted forces (we all know what the word ‘vetted’ means) from throughout Libya as part of an aid package (we all know what aid means) that also is intended to help stop the flow of migrants and terrorists trying to reach Europe.

It is as one Arab commentator, Hisham Melhem puts it “It may be too late for Europe to raise its drawbridges, man the ramparts and enlarge the moat; fortified Europe is a thing of the past”.

In Europe, the Muslim enemy is already within, shipped by Turkey and Germany and are already living in small enclaves inside Europe and are familiar with Europe’s ways, habits and vulnerabilities. Installing new governments has now become the solution for ISIS which has doubled their numbers in Libya.

Anyone with a grain of logic can read the writing on the wall. The U.S. and the world powers (except Russia and China were not involved) are preparing the Middle East in creating a huge vaccum where some big new system must fill in the blank: a moderate Caliphate. Just use your urban dictionary to see who this is!

It’s not like we do not have enough mess to prepare for World War III. We live in strange times where the words of prophets resonate and where oxymorons have become the norm. Iran  has become an ‘enemy-ally’ of the U.S., the U.S. is supposedly fighting against ISIS, while it is also against Syria and Russia the arch-enemies of ISIS while it partners with Turkey. Never before do we see things being set up for Daniel 11 where the man of evil invaded Libya and Egypt as the waterways are crucial for his world commerce.

What Sykes Picot divided will soon want to unite to forge alliances between two major regional superpowers, Turkey and Iran. The West has created a mess from Syria, Iraq, to North Africa. Soon a mega alliance will form and if Al-Sisi of Egypt and Haftar of Libya refuse to comply, they will simply be invaded (See Daniel 11).

In March we wrote of a leaked memo which indicates the US lawmakers were personally briefed by King Abdullah in January about plans to create a mess in Libya. It is all about World War III warned the king. King Abdullah confirmed his country’s own special forces “will be imbedded [sic] with British SAS” in Libya. He told those present of the bigger mess they are creating:

“The problem is bigger than Isil [Islamic State], this is a third world war, this is Christians, Jews working with Muslims against outlaws.”

What we warned about in March is coming to fruition. King Abdullah gives a level of insight that westerners will never get from their own governments. Now the country will escalate to even a greater mess by creating more fractured governments. And the problem is much bigger. The memo indicates that Abdullah also told US lawmakers: The Turkish president, Recep Tayyip Erdoğan, “believes in a radical Islamic solution to the problems in the region” and the “fact that terrorists are going to Europe is part of Turkish policy, and Turkey keeps getting a slap on the hand, but they get off the hook”.

Is NATO heeding the king’s advice? No.

Buy why? Why does the West aid Islam while it ignores the king?

The West currently has a globalist mentality. But so does Islam. The two have this in common and they see a moderate global Islam as a partner to replace the extremist brand. It is the lesson we have been drilling for years and proving it over and over again in every story we post. Evil always starts with the abandonment of nationalism (reverse to babel) and ends by nationalism (aversion from Babel) and the reversion to nationalism was what brought the Islamic Caliphate as well as Communism to collapse. Now the West are aiding both by abandoning Christianity. It is experiencing what we have seen in socialist Russia and every other empire. It all starts in Genesis and ends in Genesis where the war is between the seed of the woman and the seed of satan where satan’s attempts are reversed and Babel retreats.

Keeping these principles is key to stop believing that a one world order will succeed. And today we see parts of Europe reverting to nationalism which will eventually defeat globalism’s European Union, while the Muslim is reverting back to Babel attempting a one world language, one world religion (Islam) and one world government (Sharia).

God’s refinement is by reversing the Babel effect where the two (reverse as in Euroskeptic and unite as in Eurocentric) are colliding together. The Euroskeptic results from the massive Muslim locust invasion and the falling away results in Eurocentric. The same we see in the U.S. with the growth of support for Donald Trump who is anti-globalism. The road to learn this hard lesson will be World War III, Armageddon. First as a result of the conflict between Eurocentric and Eurskeptic will cause the weakening of Europe where Turkey will invade Rome and hang their flags on St. Perter’s Basilica where this will spark the turnaround. Russia will interject and eventually their Cross will stomp Turkey’s crescent. Even the Russian Crucifix is prophetic. (I shall do a more extensive report on all of this for the next Sunday Special).

Muslims Ambush Fifty Christians, Slit Their Throats And Slaughter All Of Them
Muslim Refugee Tries To Molest German Teenager At Train Station, She Turns Around And Beats The Pulp Out Of Him
Follow