You are here: Home › Japan Begins Mass Drive In Drone, AI Technology For Military Use

By Andrew Bieszad on January 18, 2021 in Featured, General 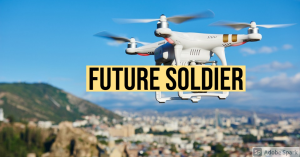 An interesting article that appeared in the Nikkei two weeks ago reports that Japan is working on advanced artificial intelligence technology in military aircraft in order to close its ‘technology gap’ with China.

Japan has begun to develop unmanned, remote-controlled fighter aircraft capable of breakneck maneuvers that will be deployed as early as 2035, bracing for further advancements in China’s military technologies and the rise of drone warfare.

Currently, Tokyo stands outmanned and outgunned by its larger neighbor. China possesses more than 1,000 fourth-generation fighter jets that can reach supersonic speeds, about triple as many as Japan, according to the Defense Ministry. It has also began deploying fifth-generation stealth fighters.

Facing a significant disadvantage in numbers, Japan, like many other countries, is accelerating defense-related research to curb China’s military power.

Japan’s Defense Ministry plans to introduce fighter drones in three stages — first those that are remote controlled, then “teaming” operations where one manned plane would control several drones, and ultimately for use in completely unmanned and autonomous squadrons. Autonomous weapons require advanced machine-learning capabilities, and international rules have yet to catch up to the technology. The ministry plans to focus on teaming operations first for its 2035 goal, set to coincide with the deployment of Japan’s next-generation manned fighters.

Japanese companies have already been tasked with researching the necessary technologies. Subaru will be in charge of developing remote and flight control capabilities, while Mitsubishi Heavy Industries and Mitsubishi Electric will work on an instantaneous information-sharing system between multiple aircraft. The ministry’s Acquisition, Technology and Logistics Agency is also planning out artificial intelligence technology for the drones.

Japanese players could partner with U.S. and British companies as well.

The ministry will invest 2.5 billion yen ($24.3 million) into remote and flight control technology, and another 200 million yen into AI technology. It aims to conduct a flight test with a small prototype around fiscal 2024, when the research phase is expected to wrap up, and start designing the final product as early as fiscal 2025. The final fighter drones could be equipped with detection and missile capabilities.

Japan hopes to bolster its defenses using relatively little manpower by allowing one pilot to control multiple drones, and having the jets share information with each other. The drones could also gather data in dangerous areas without risking the lives of Japanese self-defense personnel. (source)

I am going to say this again, even though I have said it before, because it is worth repeating.

That is why the US is so feverishly working at it, as well as Japan. It is not an accident. It is a sign of what is coming for the future. He who controls the drones will be able to be victorious. He who does not will lose. This lesson was proved in the Nagorno-Karabakh conflict as it was not the ‘strength’ of the Azeri military, but her Turkish-made drones that annihilated many seasoned Armenian fighters.

A man can be trained to shoot and shoot masterfully after much time. A machine will always shoot more accurately than a man ever will with less effort and man-hours. There is no comparison between them. Human soldiers will not be wholly obsolete yet, but they will be relegated to less-critical roles, that is, for those who want to survive. Those who do not change their roles may find themselves destroyed like the generation of 1898 for the UK in World War I, largely because they were ordered to march directly into machine gun fire in a horrible example of battle tactics gone terribly wrong.

The drones are the future. Remember this lesson and all will fall into line, at least for a geopolitical-military conflict scenario. Likewise, he who invests in the companies that make the drones will find himself able to handsomely profit from the production of wartime drones.