You are here: Home › The Future Of France, And Blaming The US, When Both Share Blame 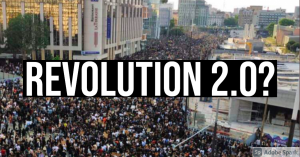 America has a tendency to export her ideals, good or bad, to the rest of the world. Unfortunately, when it is bad, it can have disastrous consequences. One of the recent and not good exports has been “critical theory”, or just another modern form of racism from a communist viewpoint that in an American context says that laws and society are all made for “racist white people” and everything has to be destroyed and rebuilt so that “people of color”, sodomites, and other select groups can have “justice.”

Now according to the New York Times, the nation of France is saying that ideas such as this and other forms of race politicks are threatening the identity of France as a nation, and that they are coming from the US.

The threat is said to be existential. It fuels secessionism. Gnaws at national unity. Abets Islamism. Attacks France’s intellectual and cultural heritage.

Emboldened by these comments, prominent intellectuals have banded together against what they regard as contamination by the out-of-control woke leftism of American campuses and its attendant cancel culture.

Pitted against them is a younger, more diverse guard that considers these theories as tools to understanding the willful blind spots of an increasingly diverse nation that still recoils at the mention of race, has yet to come to terms with its colonial past and often waves away the concerns of minorities as identity politics.

Pap Ndiaye, a historian who led efforts to establish Black studies in France, said it was no coincidence that the current wave of anti-American rhetoric began growing just as the first protests against racism and police violence took place last June.

“There was the idea that we’re talking too much about racial questions in France,’’ he said. “That’s enough.’’

Along with Islamophobia, it was through the “totally artificial importation’’ in France of the “American-style Black question” that some were trying to draw a false picture of a France guilty of “systemic racism’’ and “white privilege,’’ said Pierre-André Taguieff, a historian and a leading critic of the American influence.

Mr. Taguieff said in an email that researchers of race, Islamophobia and post-colonialism were motivated by a “hatred of the West, as a white civilization.’’

“The common agenda of these enemies of European civilization can be summed up in three words: decolonize, demasculate, de-Europeanize,’’ Mr. Taguieff said. “Straight white male — that’s the culprit to condemn and the enemy to eliminate.”

Behind the attacks on American universities — led by aging white male intellectuals — lie the tensions in a society where power appears to be up for grabs, said Éric Fassin, a sociologist who was one of the first scholars to focus on race and racism in France, about 15 years ago.

Back then, scholars on race tended to be white men like himself, he said. He said he has often been called a traitor and faced threats, most recently from a right-wing extremist who was given a four-month suspended prison sentence for threatening to decapitate him.

But the emergence of young intellectuals — some Black or Muslim — has fueled the assault on what Mr. Fassin calls the “American boogeyman.’’

“That’s what has turned things upside down,’’ he said. “They’re not just the objects we speak of, but they’re also the subjects who are talking.’’ (source)

These things are objectively true that the French government is saying, and their effects. France too is indeed at a crossroads, mostly due to a refusal to practice religion and a decline in birthrates. It is not a lie to say the French are replacing themselves- they truly are -through migration and refusing to reproduce. The statistical data does not lie, nor do the visible changes, and one would have to be dishonest to deny this. Major changes are going to come to France if something big does not happen soon, and she is dying as a nation, albeit at he own hand. These ideas, while present, are certainly being encouraged by the Americans, and so they are not helping.

That said, the talk about blame for “Americans” doing this is also political. As noted in the full article, many ideas also were promoted in France for a long time, so they are not isolated just to the US. I note this because, as a trend Shoebat.com has noted, the French want to rise again as an imperial power, and they are seeking to break free from US influence in the world. Accusing the US of something they obviously have promoted is a very clever way to state and obvious truth and use it as a cover to justify one’s own machinations.

Remember that when it comes to politics, the French and Germans often ally on major matters. There will be some resistance from the French, but a majority of support. In this context, it fits perfectly into the current struggle we have discussed, which is the fight over who gets to be Germany’s friend. If Russia wins, the US is forced out of a major conflict. If America wins, Russia will likely lose.

Germany is the country that matters. What she does determines the future of Europe and to that, a lot of the world. France is a close second- she has the fifth most powerful military in the world, the world’s second strongest navy,
and given her relationship with Germany, is a formidable contender. She does not want to lose this, and she is going to do what she believes she has to do in order to keep it.

Another interesting observation will be the words of Professor Jason Jorjani, which Shoebat.com has pointed out many times, and that is, how in the future, there may be a mass extermination of migrants.

Indeed, considering how “French Identity” is under attack, and there is concern about the US promoting it, the people who may fare the worst will be migrants who do not “look European”. They might suffer as bad or worse, including potentially being rounded up or even executed.

There are many trends taking place, and a lot that could happen. However, do not forget that the French Revolution never ended- it is still here and so are its effects, and so the same mindset prevails. What happened to the Vendee could happen again, except this time, not only may it be religious Christians, but also Muslim and migrants out of the same nationalistic impulses.

4 Of 10 Republicans Say Political Violence May Be Necessary, And The Looming Condemnation Of Evangelicalism
Islamic Terrorists Ambush And Murder Twenty-Six Syrian Soldiers
Follow