You are here: Home › If The Famed Provocateur Milo Wants People To Believe He Is No Longer A Sodomite, He Has A Lot Of Questions That Need To Be Answered And Verified By Other Than His Own Words 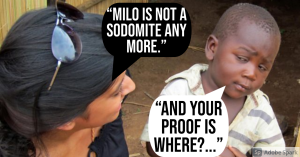 Every once in a while, the Conservative movement needs a hero to laud, and they have one now, or rather, one who is back, as the famed sodomite Milo Yiannopoulos is now making conservatives and members of America’s Christian churches happy as he is declaring he is no longer a sodomite.

Milo Yiannopoulos, the gay man whose conservative messaging and willingness to speak the truth sparked riots on university campuses may well trigger more outrage now that he describes himself as “Ex-Gay” and “sodomy free,” and is leading a daily consecration to St. Joseph online.

Two years ago, when Church Militant’s Michael Voris famously challenged Yiannopoulos to live a chaste life, Yiannopoulos was not defensive. Instead, he acquiesced, and humbly admitted his human weakness.

Milo Yiannopoulos, the gay man whose conservative messaging and willingness to speak the truth sparked riots on university campuses may well trigger more outrage now that he describes himself as “Ex-Gay” and “sodomy free,” and is leading a daily consecration to St. Joseph online.

Two years ago, when Church Militant’s Michael Voris famously challenged Yiannopoulos to live a chaste life, Yiannopoulos was not defensive. Instead, he acquiesced, and humbly admitted his human weakness. (source)

Now let’s have a serious talk about this.

Ask yourself, why should you believe anything Milo Yiannopoulos says at all when we really don’t know anything about him?

Who is Milo Yiannopoulos? His birth name seems to have been Hanrahan, and he seems to be part Jewish based on his own admission, but that is all we really know. Who is is family? Where did he grow up? What is his life story? Who else exists that we can check his words against? Walid, Ted, and I are all known- our histories are well known as well. If we, who are relatively minor figures in the public have this, what makes Milo an exception to having the same scrutiny applied to him? The above two points are the only things we know, along with his history of sodomy and going to parties where there are “very young boys” present with few clothes on and consuming drugs,  he has said himself in interview.

Speaking of scrutiny, there is another major question- who was the “black man” he supposedly “married”? Does one not think it is very curious that for all these years, no one has ever seen this person’s face, been able to verify his identity, or say anything about him? In fact, it is so curious, it is almost like the mysterious figure Hugh Fitzgerald who writes over at Jihad Watch- no one ever seems to have seen his face, confirmed his existence, or met him in person except for what it appears is Robert Spencer, and he writes an awful lot like Spencer but in a more aggressive and less socially acceptable style.

Milo has claimed for years he is “Catholic”. Well, again, what are his connections to the Church? Where is his Baptism certificate, his confirmation papers, photos of him in a Church, or any direct connection with any Church prior to his all too interesting rise to fame? If there is evidence, it would be welcomed greatly, because for all of the years he has spoken about being a “Catholic” and interviewed about it, and how supposedly his committing of the sin that cries out explicitly to Heaven for vengeance and is so hated by God that Jesus came down and destroyed those cities as a sign for all time by means of fire from Heaven that was hotter than the sun somehow makes him a better Christian as he advocates for lowering the age of consent while in an interview with the “former homosexual”-who-happens-to-live-in-the-most-sodomite-friendly-town-in-the-state-of-Michigan Gary Michael Voris, we need more proof of this man’s claims of being Catholic other than his words.

The behavior I am seeing shown to Milo from Catholics and other Christians, especially on the political right, is a condensed and eloquent expression of the problem with the American Christian right and the political right in general. People so want for either a savior or to see people like them that they just blindly accept those who claim to follow their positions without thinking. It is a sort of ‘grabbing’ at anything that one can, and while the reasons for why this behavior happens can be debated, the fact is that such is neither Christian nor the sign of intelligent or logical behavior, but rather a sort of animalistic attempt to take what one can get while thinking about what one has got later. It’s reeling in the first ‘tug’ on the fishing line without ever checking to see what one is reeling in, not knowing or caring what it is, even if it is a giant shark that will eat them later.

If Milo truly has renounced Sodom, all its works, all its evil practices, and really is committed to abandoning that lifestyle, then (a) good for him, and (b) that is between him and God to work out, for which there is a long road ahead. One must admit there are men who try to do this, but in equal fairness, consistent experience has shown that they are the extreme exception as opposed to a rule. It should be a very reasonable sign of concern to anybody watching this saga that Milo suddenly is announcing he is no longer a sodomite at a time when he has been out of the public eye for a while, considering that it is his attention grabbing behaviors that propelled him to fame and most likely, his bank account into the green as opposed to being in the red.

Does Milo, a man who associates with provocateurs and questionable men such as Bannon, who is himself a known public provocateur, expect men to believe his words? Then perhaps Milo can start by introducing us to his sodomite partner- or perhaps former sodomite partner now -and telling the public all about his relationship, who he was, where they met, and doing so in a way that his statements can be cross-referenced by publicly available data sources, not to mention the “Catholic Churches” he has been affiliated with in his life so that they can be identified and tied to him by way of outside confirmation.

There are far more questions that need to be answered, but I will start with those two matters, because the fact is that Milo most likely will not answer those even though they are important. If Milo cannot answer basic questions or describe himself in ways to confirm fundamental details of his life outside of his own statements, then why should anybody believe a word he says other than about his previous statements professing a love of sodomite behavior, as that was what made him famous?

The EU Declares To Poland: ‘You Must Embrace Sodom.’
Frenchman talks about how France has become a total hell hole
Follow