You are here: Home › Will Kentucky Pass A Bill To Criminalize “Insulting” A Police Officer? 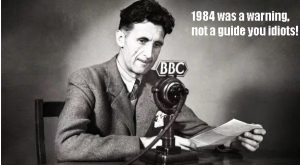 There is always a balance between the rulers and the ruled in any society. There must always be balance, allowing for criticism but also maintaining order. The needs shift with times, cultural norms, and other circumstances, but the fact is that there always needs to be a balance. Problems happen when one side tries to ‘tip’ the balance too much to their favor, which can result in an equally strong and dangerous ‘countertip’ that is as or more destructive than the previous ‘tipping’ attempt.

According to local CBS news from Kentucky, the state is considering a bill that would make it a crime to ‘insult’ a police officer.

A bill moving through Kentucky’s Senate would make it a crime to insult or taunt a police officer during a riot. Supporters say the bill targets people who unlawfully “cross the line” but opponents call it a blatant attempt to crush protests and a violation of First Amendment rights.

Senate Bill 211 mandates up to three months’ imprisonment for a person who “accosts, insults, taunts, or challenges a law enforcement officer with offensive or derisive words,” or makes “gestures or other physical contact that would have a direct tendency to provoke a violent response from the perspective of a reasonable and prudent person.”

A person convicted of this misdemeanor charge could also face a $250 fine and be disqualified from public assistance benefits for three months.

The bill also has a provision pushing back on the “defund the police” movement, stating that government entities that fund law enforcement agencies must “maintain and improve their respective financial support.”

The bill advanced through the Senate’s Veterans, Military Affairs and Public Protection committee on Thursday in a 7-3 vote, with only Republicans supporting it. It now moves to the full Senate and could be passed there as early as next week, and would then need to be passed in the House. Republicans control both chambers of Kentucky’s legislature.

CBS News requested comment from state Senator David Carroll, a Republican and retired police officer who is the bill’s lead sponsor. Following publication of this story, he wrote in an email, “After looking at you’re headline, I don’t think I have anything to say to you. I miss the time when we actually had unbiased journalists!!”

Carroll told the Louisville Courier-Journal that the bill is a response to riots that broke out in many cities across the country last summer. Louisville was an epicenter for racial justice protests due to the death of Breonna Taylor, a Black woman killed in March 2020 during a raid of her home by Louisville police officers.

“This country was built on lawful protest, and it’s something that we must maintain — our citizens’ right to do so,” Carroll told the Courier-Journal. “What this deals with are those who cross the line and commit criminal acts.”

The ACLU of Kentucky called the legislation “an extreme bill to stifle dissent” and said it would criminalize free speech. (source)

Now there is a point that is of note about police being unfairly treated or mistreated by those attempting to do so-called ‘activism’ for a political cause. However, the opposite can also be taken, which is what seems to be happening here.

The concept of ‘insulting’ a police officer is very broad, and given the already existing trends in American law, it could be taken to mean anything that one wants. Even the category of ‘resisting arrest’ can and has been known to be abused, for while there are people who do this, there are a lot of cases of police who simply try to use it to throw another charge on a man.

I’m not saying that one should be ‘pro-police’ or ‘anti-police’. I am saying that a balance of power exists, and that while it cannot be allowed that anarchy prevail, the opposite trend- to authoritarianism -is even more dangerous because the governments are those who can more easily, consistently, and completely press their force against the people and not in the reverse, especially in the US and in particular since World War II. This is not a case of fighting Mormons in Utah or even small rebellions from workers against companies, but the most powerful, heavily armed, absolutely willing to use force against anybody government in the world from federal to local police taking up possibly laws that make it a crime to criticize it.

Again, we must emphasize balance. The protests for “Black Lives Matter” or even the silly Capitol protests this January would not have been affected by this law because laws are only as good as the will of others to enforce them, and in both cases, it is clear that both incidents had more than enough opportunities to be stopped and were consistently and curiously not taken.

Call it what one wants, but laws such as the above, which sound good, ultimately in most cases, as history shows, tend to result in more abusing happening, yet with people clamoring for safety in exchange for freedoms, it was inevitable that this and eventually more repressive things may come to pass to the point that the frog looks up from his pot and does not understand how he could have boiled to death in it while the temperature was going up the whole time and he simply never cared to notice.

Police Report: George Floyd Was On Meth While He Was Being Arrested
The EU Declares To Poland: ‘You Must Embrace Sodom.’
Follow