You are here: Home › Give Three Dollars To The Homeless Guy Who Wants A Beer Before Giving A Cent To Trump 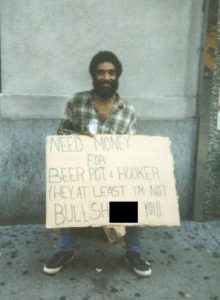 Years ago, I was in New Orleans, which is full of homeless people and alcoholics. While there, I was approached in daylight by an elderly, homeless drunk who said something to the effect of “Hey man, can I have three dollars? Just want a beer.”

I never forgot that instant, because while alcoholism is not good, I respected his honesty. It is true that not all homeless beggars are scammers, but a lot are, and honesty is always to be commended.

In keeping with this memory, I could not help but think of it with a recent story from The Hill, where Trump is now telling GOP members not to give to the GOP, but directly to him.

Former President Trump doubled down on his calls for Republicans to donate to his leadership PAC rather than the GOP amid a growing feud over the party’s use of his name and likeness in its fundraising.

In a statement put out by Save America, Trump’s PAC, the former president berated “RINOs and fools” while maintaining he supports the Republican Party. It’s the latest escalation in the fundraising dispute that began over the weekend.

“I fully support the Republican Party and important GOP Committees, but I do not support RINOs and fools, and it is not their right to use my likeness or image to raise funds,” Trump said, using the acronym for “Republicans in name only.”

“So much money is being raised and completely wasted by people that do not have the GOP’s best interests in mind. If you donate to our Save America PAC at DonaldJTrump.com, you are helping the America First movement and doing it right. We will WIN, and we will WIN BIG! Our Country is being destroyed by the Democrats!” he added. (source)

This is perhaps one of the most brazen examples of arrogance I have ever seen in anybody.

Trump is a supposed billionaire. However, as the NY Times and other investigative outlets uncovered, Trump spends money faster than he makes it. He has basically made his entire life off of being an actor, promoting the image of wealth before the actual possession of it. Trump is probably the most famous “confidence” scammer today, for he has marketed himself over and over and people still continue to believe him, all the while he get richer off of their spending on his image than from anything he has produced.

Now as I said before and I will say again, I supported Trump because his circumstances of his rise to power made him, genuinely speaking, a wildcard, and historically speaking, wildcard events in history, no matter what the political affiliation, culture, ethnicity, or circumstances, always offer the best opportunities for change. It is one of the reasons why, in and European geopolitical setting, Italy is always at the center of so many changes and controversies, because she is an extremely diverse nation representing the best and worst in Europe, as well as considerable order and considerable chaos, and so tends to incline to “wildcard” type behavior that can facilitate real change.

Trump had that chance. It doesn’t matter what one thinks about him, because what is not for arguing is that Trump was given not just a chance, but a chance afforded to few men in history, to truly make a real difference by not stopping the current trajectory of American economics, as that was sealed well before his election, but to set up systems in the nation to prepare for a better future. He could have gone down as a truly great president.

But what did Trump do? In spite of all that people say or project onto him, for good or bad, his actions are clear. Trump did nothing except promote his own image. He didn’t care about anything except himself, and did NOTHING for the nation outside of appointing a few judges. Trump most importantly betrayed his base and then made every excuse not to do what he promised.

Democrats may have a lot of bad ideas, but they are honest about them. They do or try to do most of what they say, because they have principle- many times evil principles, but nevertheless principles on which they base their actions and judge themselves.

Look at TARP from over a decade ago. For those too young to remember or with short memories, TARP was the GW Bush era plan during the 2007-2008 economic crisis that paid the bills of companies. It was Wall Street getting a cash bailout from the government. Republicans largely supported that measure.

Fast forward to now, and what does one see with the recent COVID bailouts, not just for Wall Street, but the common man- Main Street? Universal, almost lock-step Republican opposition to it.

The Republicans, without a joke, voted to bail out Wall Street, but refuse to bail out Main Street.

And by the way, I am not saying that bailing out ANYBODY is good. I opposed the TARP on principle, and same for the first round of stimulus checks. However, if Wall Street is going to get bailed out, Main Street naturally has to not just because of “fairness,” but because companies exist for people, not the other way. If people cannot consume, how can companies be expected to get money from them? Either there must be a debt jubilee, or bailouts, but in both cases, what happens to the “companies” and wealthy cannot avoid the common man.

Now, what do we see here? We see President Trump, in spite of all his basing a campaign on complaining about welfare, migrants, refugees, and his so-called ‘self-made life, literally asking the people he insulted- his base -to bail him out when refused to help them.

Is it a surprise why the Democrats won? It’s not just cheating. It’s that they have more principles than Trump and what has become of the GOP.

I said before that if Trump loses, the GOP has a historic opportunity to remake herself. However, that opportunity can only work if she takes it. Amazingly, the GOP does not seem to be doing that right now. Such may change, but if patterns continue, there is a chance the GOP might waste a chance at salvation and simply continue running full speed down the road to her own historical irrelevance.

The GOP really is in trouble. They have to remake themselves because if they don’t do it, they are gone. They have made some good gains, but their long-term trajectory is unstable. Democrats have the advantage of consistency, the inner cities, and demographics. The latter can build on momentum, while the former has many challenges to face.

They need to dump the Trump, and get a new image now, or else things may become very interesting in the future. And while doing that, give the three dollars to the homeless drunk but not a single cent to Trump, for at least the drunk is honest about all of his intentions in this case.

The History Of Christendom Is Filled With Class Warfare, Massacres And Tragedy
Get Out The Helicopters And Fire Up The Presses, Biden Bucks Money Shower Is On Its Way
Follow