You are here: Home › Prepare For A Massive Refugee Wave And A Return Of The Horrors Of ISIS As Ethiopia And Eritrea Will Likely Descend Into Chaos As A Bloodbath Ensues For US/NATO Control In Africa 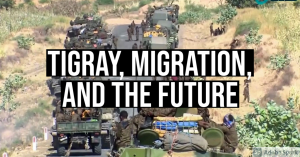 Back in 2015, Walid wrote about a massive food crisis coming to the Middle East, where the Nile would dry up and millions would suffer.

You can read the full piece here. It is particularly interesting in light of developments taking place in Tigray that I have written about, where Tigrayans are crying ‘genocide’ as the fighting between Tigray against Ethiopia and Eritrea intensifies as the world watches with a sympathetic eye towards Tigray.

Ethiopian troops and their allies in the restive northern province of Tigray face a growing insurgency fuelled by a series of massacres and other violence targeting civilians.

The country’s prime minister, Abiy Ahmed, launched a military offensive four months ago to “restore the rule of law” by ousting the Tigray People’s Liberation Front (TPLF), the political party in power in the province, following rising tensions and a surprise attack on a federal army base.

Despite government claims of a significant improvement in the security situation in recent weeks, tens of thousands of Ethiopian troops and soldiers sent by neighbouring Eritrea to support Addis Ababa’s military operations appear to be facing continuing resistance.

Mekelle, the provincial capital, is relatively calm, but there are reports of fighting elsewhere. Around a third of the province may remain out of government control.

A series of fierce clashes took place in mid-February around Samre, a small town 40km south-west of Mekelle, as thousands of Ethiopian troops supported by artillery, tanks and airstrikes batted forces loyal to the TPLF dug in there.

Residents in Adigrat, in north-eastern Tigray, say they have heard heavy weapons firing for days in hills around the town. Similar reports came from the town of Adwa on a strategically important crossroads near the border with Eritrea, and multiple other locations. (source)

You have heard this from me over and over at Shoebat.com. I am going to say it again- watch for Ethiopia to start appearing in the news like a floodgate. Forget about the Chauvin trial and Black Lives Matter when it happens, because if this happens- and there is a strong chance it will -it is going to be world-shaking.

Ethiopia’s basically been in the middle of a long, historic, and like with many African conflicts, a brutal war between the formerly dominant Tigray ethnic group (where the WHO director Tedros is from) and the eastern region of the country. Ethiopia, as I have explained, straddles the US/NATO and Soviet blocs of influence, and now that things are losing control there again, they are ripe for exploitation. It is not a surprise that Biden’s foreign policy wing, from what it seems, is shifting a huge chunk of their attention there.

Basically, the rebellious group (Tigray People’s Liberation front, or TPLF) seems to have baited Ethiopia’s current and inexperienced leader into overplaying his hand by acting overly aggressive against them. This makes it so they can claim persecution as part of a an attempt to regain power in their region after having had been ousted decades ago. It seems they have succeeded, as Ethiopia started the war with the public relations “high ground” following TPLF attacks on an Ethiopian military base along with rocket incursions into Eritrea (and hence is why Eritrea became involved). However, because Ethiopian Prime Minister Abiy Ahmed took a very strong hand against the TPLF without properly managing the image of the situation, he and Eritrea both have lost control over the public relations side, not to mention some of their own soldier’s actions. In other words, the militaries have mostly won the conflict, but lost the image battle. This is particularly serious considering that the TPLF has been used historically by NATO, such as during the 1970s and 1980s as proxy fighters against the Soviet-supported Derg that overthrew Haile Selassie and set up a communist dictatorship.

Just look at the news. CNN recently had an exclusive interview with the leader of TPLF. The TPLF also had a particularly strong relationship with the Obama administration, and remember, Biden has naturally maintained strong ties with the previous administration he was Vice President for.

Will the US put troops on the ground? I have suspected as much, but it would most likely all be done in the context of NATO- think Bosnia 1994 but more serious. The UN may have her own peacekeepers there too, but no matter what happens, at this point, where the USA goes NATO as a whole also goes.

Either way, the situation is bad, and the chance for intervention is very high. For example, consider the following situation as a possible, but clearly not inevitable scenario-

Ethiopia puts down the TPLF rebellion and occupies Tigray. Separatist movements move into the underground, as they gain support from the US and NATO as the “international community” condemns Ahmed. Ethiopia, Eritrea, and puts sanctions on them. Ethiopia continues to have sporadic bouts of violence both with Sudan and within its own borders as conditions in the country continue to deteriorate. Some of this is happening/may happen in the near future, such as with the major refugee crisis that has developed already.

A Tigray insurgency akin to IRA begins, and at the same time, the various other inter-country and border ethnic groups, particularly the Oromos and Somalis, start their own rebellions. In response, Ahmed tries to keep control and he cracks down and starts arresting opposition and leadership. IN response, the US/NATO uses it to accuse him of further “human rights abuses: while the media promotes the political line. As predicted, things worsens and the country descends into a brutal civil war between the Tigray, Amhara, Oromo and Somali groups. This naturally is used to justify “humanitarian intervention”, so NATO and friends get involved and raze Ethiopia and Eritrea. Thousands die, the current food/famine situatous goes from bad to nightmare mode, and fighting continues for power and Ethiopia becomes a war zone between what could be the Republics of Tigray, Amhara, Afan, Ogaden, and Gambela.

Sudan and South Sudan, sensing the blood in the water and wanting to maintain water access on their ends due to Ethiopia’s position as the motherland of the Nile, get involved and start taking pieces for themselves. Egypt was already involved in the military action because she is the second largest recipient of US aid after Israel (and honestly, an Ethiopian denial of Egyptian water demands would be an attack on the image of US power projection abroad, which the US will never allow to happen), and now the nation is just a shadow of its former self. The Ethiopian dam project is in the dustbin, parts of Ethiopia- possibly some of the above mentioned pseudorepublics -go to Sudan, South Sudan, and Somalia, meanwhile Ethiopia gets the “Gaddhafi treatment” given to Libya back in 2012 as “rebels” take control, and just like in the days of ISIS, the liquidations of common people in horrible ways are back on camera. The world watches in horror, except instead of Arabs and Semites, its Hamites and Afro-Semitic peoples who are suffering. The world watches in horror.

Meanwhile, countless people have died of famine, the conditions are the worst in all of Africa, and people are begging to leave. The region, which is now a combination between rebel occupied or US/UN/NATO occupied, becomes the worst place on the planet, and then suddenly, people begin to migrate, encouraged by the US/UN/NATO. Where do they go? Sure enough they are being invited by Germany, France, England, and all of the European Union plus the US to migrate. The US does her part too, of course, and the nationalist in Europe and the US begin to become angry again, nationalism rises as people flood in and crime increases…

..And sure enough, it’s 2015 and 2016 all over again, except much larger and more serious. Plus, it just happens to have the added effects of flooding the area with German/Italian/French/American industries involved in the rare earth metals business, as well as other goods needed for war. To that, Russian and Chinese investment in the region, both being well-known and acknowledged as geopolitical threats (especially the Russians, since they have been making inroads into Ethiopia for centuries as a part of their own plans and struggles with Germany) are kicked out again, and left with the options of basically trolling western powers instead of actually having real power to influence the destination of those parts of the world by their own national actions. Russia continues to move further into isolation as does China, except the Russians are more serious because they know what is at stake and continue to play their side carefully in preparations for a coming global war. Meanwhile, the US and NATO militarizes the whole region, continuing already existing trends such as the French re-militarization of their former colony in Djibouti.

This is just one scenario. But it is a very possible scenario. No matter what happens, however, the chance of US intervention into the Horn of Africa region is very high. Remember that back in 1993 the US was there for similar reasons (the Black Hawk Down incident), and in this sense, nothing had really changed, except the natural issues I mentioned before are closer to being realized than in the past.

Likewise, referring to the Nile drying up, remember that wars often do not help human or natural circumstances. In fact, there is a strong chance that even if the US does blow up the Horn of Africa, it will not stop the environmental factors other than to worsen them. In other words, Egypt will still starve- it is just that they will be joined by the sub-Saharan African neighbors.

We are living in very interesting times.

Get Out The Helicopters And Fire Up The Presses, Biden Bucks Money Shower Is On Its Way
US Military Tests New Laser Machine Gun
Follow