You are here: Home › Italian Lockdowns Are Back On The Menu As Two-Thirds Of The Country Prepares For Lockdown 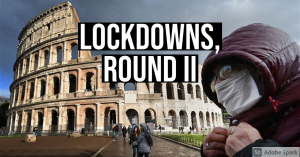 One of the important trends to follow will be the proliferation of COVID-related lockdowns, since it is the lockdowns that are, in the name of stopping disease, having other major and serious social consequences. According to Bloomberg by way of MSN News, Italy is preparing for a new set of lockdowns that may shut down two-thirds of the country.

The government of Prime Minister Mario Draghi is weighing stringent new restrictions on as many as two-thirds of Italians, with the regions encompassing the country’s largest cities possibly heading into lockdown amid a resurgence in the pandemic.

The tightening would bring Italy full-circle just over a year after it became the first Western country to enter lockdown to stop the spread of the coronavirus. Infections rose to a three-month high this week after the more contagious U.K. strain took hold amid a slow vaccine roll-out.

Draghi’s cabinet was due to meet at 11:30 a.m. on Friday to decide whether to automatically designate regions as high-risk “red zones” if they have more than 250 weekly cases per 100,000 inhabitants, according to a draft of a new decree seen by Bloomberg. The draft is subject to change.

The new decree would go into effect starting Monday and could effectively send many regions, including those surrounding Milan and Rome, into full lockdown. The restrictions would remain in force until April 6. During the Easter holidays, from April 3-5, all of Italy would be a “red zone,” except for the few areas at the least risk of contagion, according to the draft.

Combined with restrictions already in place, the new measures could mean that as many as 14 of Italy’s 20 regions will be under the strictest level of controls. Bars and restaurants in these areas will be closed, as will schools and many stores. Citizens will be mostly confined to their homes. In medium-risk “orange areas,” two adults can visit a private home within their town once a day until April 2, the draft says. (source)