You are here: Home › Study: One-Third Of Catholics, One-Fourth Of Protestants In Germany May Leave Churches 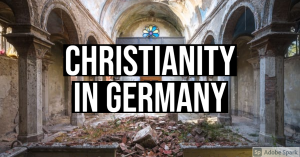 Germany has a long history in her with Christianity, but in modern times, the practice of religion is lower than ever before. According to the Catholic News Agency, one-third of Catholics and one-fourth of Protestants are considering leaving their churches.

A third of all German Catholics are considering leaving the Church, according to a new survey published on Thursday.

The representative study, unveiled March 11, was conducted by the Erfurt-based opinion research institute INSA Consulere on behalf of the Catholic weekly newspaper Die Tagespost and the Protestant news agency Idea. It confirms a previous survey’s findings that indicated similar numbers.

Of those surveyed who belong to the Catholic Church, 33% are considering leaving the church because of the ongoing scandals over the handling of clerical sex abuse cases, while 44% said that they were not going to turn their back on the Church. A further 14% of respondents indicated that they “didn’t know.” Nine percent of those involved in the survey did not specify an answer.

CNA Deutsch, CNA’s German-language news partner, reported that the new survey also found that one in four members of the Protestant regional churches in Germany said they might be “leaving the church soon.”

In 2019, a total of 272,771 German Catholics formally left the Church — more than ever before. The figures for 2020 will not be published until the northern hemisphere’s summer.

The abuse crisis is not the only reason for the exodus. According to a study by the northern German diocese of Osnabrück, older Catholics in particular cite the Church’s handling of the abuse crisis as a reason for leaving, CNA Deutsch reported. Younger people, however, are more likely to deregister as Catholics to avoid paying the obligatory church tax.

In 2019, the Church in Germany received more money in church tax than ever before. According to official figures released in July 2020, the German Church received 6.76 billion euros ($7.75 billion) in 2019. This represented an increase of more than 100 million euros ($115 million) compared to 2018, when the Church gained 6.64 billion euros from the tax. The rise was believed to be due to the growth of Germany’s economy in 2019.

If an individual is registered as a Catholic in Germany, 8-9% of their income tax goes to the Church. The only way they can stop paying the tax is to make an official declaration renouncing their membership. They are no longer allowed to receive the sacraments or a Catholic burial. (source)

I have written before, which you can read in the Shoebat archives, about the Kirchensteuer. It is a “church tax” that was set up in the 19th century to ensure balance in Germany, but has resulted in faith being equivocated with the payment of said tax. Thus one needs not to be an actual believer of the religion, regardless of church, to be counted as a part of it.

Because the churches, Catholic and Lutheran like, operate as independent agencies in conjunction with the state, the Kirchensteuer is a popular and stable source of income, and makes Germany the second largest fiscal contributor to the Church after, not surprisingly, the US. The German situation is an interesting comparison as opposed to the Russian Orthodox Church, which has I have noted in previous articles always has throughout her history more so and in particular since the Bolshevik Revolution functioned as a veritable extension of state power, and thus has been able to drive her expansion of church-building, particularly after the fall of the USSR (and mostly as a projection of state power, as I have noted), with state funds as opposed to actual collections from the laity. The other aspect of Russia as opposed to Germany is that where practice in the latter is scandalously measured by the payment of a tax, in the case of the former, one can profess religion but never contribute anything. The effect is the same in both cases, where Christianity, regardless of form, becomes an expression primarily and for the greater part, strictly of national or even ethnic identity as opposed to belief in the religion itself.

But no matter what the church is in question, all three in Europe, be it Germany among the majority Lutheran or Catholic populations in the West (as she is the historical “heart” of Europe center and west and always has been) or Russia among the Russian Orthodox in the East, Christianity is mostly nonexistent among the ‘native’ European populations save for migrants from anywhere else in the world. Poland is a notable exception for the Catholics and Romania for the Orthodox, but the Christian practice of both are very questionable, more so with the latter than the former (one only needs to look up the proliferation of the infamous Romanian prostitutes throughout Europe), but Poland is rapidly in danger and will most likely face a serious religious-national crisis as the current Zoomer generation becomes adults that will be aggravated by economic and demographic considerations. In other words, both nations are on the same philosophical trajectory to where the most powerful ones are, just on a delayed timeline.

Is there any surprise why Europe is close to returning to war again? It is for the same reason as it has been in the past, where man has forgotten God and now, in his own attempts to ‘become’ God, is only going to abase himself once again, but with bigger and deadlier weapons this time.