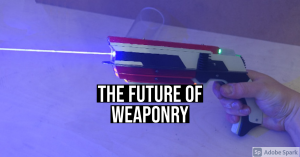 I warned at Shoebat.com that one of the next major trends is weaponry was going to be the development of ‘laser guns’ in order to address the threat of robotics and drones, as the traditional metal bullet was quickly becoming and still is a relic of another time that while still useful, will eventually be a secondary weapon as opposed to a primary one. Now according to Forbes Magazine, just as expected, the US military is testing a new laser ‘machine gun’ that shows the future warned about in science fiction movies is already upon us.

A new U.S. Army laser has more in common with Star Wars blasters than anything currently used by the military, firing a stream of bullet-like pulses of light that hit the target with explosive effects.

The U.S. Navy fielded its 30-kilowatt LaWS laser in 2014, and since then an arsenal of new lasers with 50, 100 and 150 kilowatts of power have been developed on aircraft, ships and ground vehicles. All of them produce a continuous beam that has to be maintained on the target until it melts or burns a hole.

The period waiting for the beam to do damage is known as ‘dwell time’ and is typically a matter of seconds. Obviously it presents a major targeting challenge, one reason why the preferred targets are drones and cruise missiles that do not take evasive action.

The U.S. Army’s Tactical Ultrashort Pulsed Laser for Army Platforms is different, producing a series of short but extremely powerful pulses rather than a continuous beam. To add to the sci-fi flavor, unlike invisible infrared lasers currently in use, the pulses may also be visible. The weapon will fire up to 50 pulses a second. (source)

As this takes place, note the trend that the soldier himself will most likely eventually be replaced by robotics, at least to a partial extent due to the nature of the weapons that will be used. This is not a question of a future that might be, but a future that is present, real, and tangible, as much as 19th century battle tactics were dying on the eve of World War I, and did when presented with new technologies.

Prepare For A Massive Refugee Wave And A Return Of The Horrors Of ISIS As Ethiopia And Eritrea Will Likely Descend Into Chaos As A Bloodbath Ensues For US/NATO Control In Africa
Study: One-Third Of Catholics, One-Fourth Of Protestants In Germany May Leave Churches
Follow