You are here: Home › Do Not Celebrate That Sri Lanka Bans The Islamic Burka, Because The Saffron Swastika May Come Later 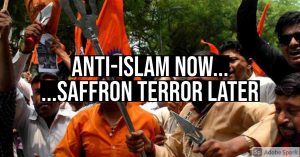 Reuters reports in a major development in Sri Lanka that the tiny island nation has banned the Islamic burka.

Sri Lanka will ban the wearing of the burqa and shut more than a thousand Islamic schools, a government minister said on Saturday, the latest actions affecting the country’s minority Muslim population.

Minister for public security Sarath Weerasekera told a news conference he had signed a paper on Friday for cabinet approval to ban the full face covering worn by some Muslim women on “national security” grounds.

“In our early days Muslim women and girls never wore the burqa,” he said. “It is a sign of religious extremism that came about recently. We are definitely going to ban it.”

The wearing of the burqa in the majority-Buddhist nation was temporarily banned in 2019 after the bombing of churches and hotels by Islamic militants that killed more than 250.

Later that year, Gotabaya Rajapaksa, best known for crushing a decades-long insurgency in the north of the country as defence secretary, was elected president after promising a crackdown on extremism. (source)

This is a really big story. Sri Lanka is not a “Muslim majority” nation, but due to her location, has a very long history with Islam, much longer than anything in Europe as a collective. Of course, one cannot and should not ignore the Mediterranean history or that of Byzantium and Rome, but the fact is that due to her location, Sri Lanka was and has been a trade route for Muslim merchants since the days of Mohammed, and Islam has arguably had a presence there since its inception.

The fact that Sri Lanka would ban Islamic dress is not a small thing. It does not matter if most people wear it or not. The fact is that this specific religious dress would be banned. It is simply opening the way to empower Hindu nationalists- backed by India -to push for more anti-Islamic policies.

And make no mistake, I am not nor never have been pro-Islam. I am pro-Christian, and part of being pro-Christian means being anti-Islam. It does not mean supporting anti-Islam causes to give support to paganism such as Hinduism, and absolutely, it NEVER means supporting eugenic racism such as Hindu nationalism, Saffron Terrorism, or other forms of just evil pagan garbage.

People may cheer the banning of the burka, but its not about the burka. It’s about attacking non-Hindu religions, and considering that like the Catholic Church in America is for Christians, Islam is the largest non-Hindu and anti-Hindu religion in India. Because of this, any successful takedown of Islam raises the power of the Hindu nationalists against all other religions, including the Catholic Church and all Christians just as how in spite of the incessant complaints largely from Protestant groups, it is the Catholic Church that has been the largest bloc in the US keeping American Protestant Christians ‘safe’ from a flood of secularist ideas.

Likewise, do not be deceived by the Buddhist influence in this nation. Buddhism is still paganism, and has a close history with Hinduism, so from a strategist point of view, and while it cannot be definitively proven right now, promoting anti-Islam in an area such as Sri Lanka could be long-term helpful to advancing Hindu nationalist ideologies in India or the regions that are near to her influence.

Shoebat.com has consistently reported about the rise of Hindu nationalists and how they have made it explicitly clear that they wish to commit genocide against Christians just like what happened to so many people during the Second World War. The time, place, and people may be different, but the desire is the same, and recall that India is the land where National Socialist thinking was first created, it only adds to the serious nature of what is happening.

Do not cheer this ruling. It may be superficially anti-Islam, but the only thing being erected in its place, if not now then in the future, will be a saffron-colored swastika, and it will not be Hans and Jochen guarding camps filled with Poles and Jews in Ostpreussen, but Hanuman and Jagpur holding Keralese, Goan, and Nagaland Christians at Kala Pani.

No Longer A Meme, ‘KYS’ Becomes The Theme Of A TV Show
Islamic Thugs Take Christian Man And Hack Him To Death With Machetes
Follow