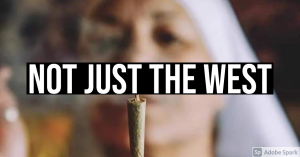 One of the important trends globally is going to be the legalization of marijuana and other drugs. It is coming worldwide, and while some countries will oppose it, it is going to be everywhere. Drug laws are going to change, and it is going to reshape government policy and economics in more ways than people can expect. It is also not just going to be limited to the “Western” world either.

In an interesting story from Morocco World News, the North African nation has, to the opposition of her other North African neighbors, moved to legalize marijuana and encourage the production of the plant as an agricultural commodity, making her unique among the Muslim world.

Morocco’s government adopted today bill 13-21, intending to legalize the production of cannabis for medicinal and therapeutic use.

The Government Council adopted the bill today in its weekly meeting after a few weeks of discussion.

After the approval, Morocco will be among the first countries on the African continent to permit the use of cannabis for medical and therapeutic purposes.

Observers were certain Morocco would make such a move after the country voted to remove cannabis from the list of the UN’s Schedule IV category of drugs that have limited or no therapeutic use.

The North African country was the only member of the UN Commission on Narcotics Drugs (NCD) in the MENA to vote in favor of the cannabis’ removal from the list of toxic substances.

Algeria, Bahrain, and Egypt all voted against the removal.

A 2019 report from the United Nations Office on Drugs and Crime (UNODC) identified Morocco as the world’s largest producer of cannabis.

The report found that Morocco produces over three times more than the next contender, the European country Moldova.

The country criminalizes the use of cannabis, seizing tonnes of the drug and its derivatives on an annual basis. (source)

This is not just an isolated incident. Morocco may be one of or perhaps the first Muslim nation to do this, but it going to come to many nations, Muslim or not. Drug legalization, support or hate drugs, is a major trend to watch for.