You are here: Home › No Longer A Meme, ‘KYS’ Becomes The Theme Of A TV Show 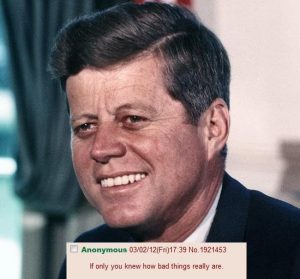 In online forum communications, “kys” means “kill yourself”, and is used as a common insult. However, according to Hollywood Reporter, such a dreadful action is now becoming a new low in public entertainment with the advent of a new show about a man who is consumed with thoughts of self-harm.

The Last Man on Earth alum, who next is reviving MacGruber for the streamer, will star in Expiration Date, a drama in development from Harry and Jack Williams.

Written and exec produced by the brothers, who count Fleabag and Liar among their credits, Expiration Date revolves around Robin (Forte), a man who is consumed by grief and finds a life insurance policy that covers suicide — provided that the individual doesn’t carry out the deed within one year. Content that his family will be provided for, Robin sets his expiration date and contemplates how he will spend his final year. It’s going to be a long 12 months.

“Harry and Jack Williams are two of the best creative minds in the industry,” said Lisa Katz, president of scripted at NBCUniversal Television and Streaming. “We are excited to develop this poignant and unpredictable drama with them and continue mining complex stories and characters. Having Will Forte in the lead role as well as a producing partner takes it to the next level.” (source)

There are some interesting points to this story, especially noting the sense of helplessness and frustration that many people have following COVID and the economic and social as well as political impacts. Some people have responded to these events in such an awful manner, and certainly it is likely the show is attempting to address something of this. However, I would like to approach this from a different view, which is that of the inevitable reaction from Christian groups (because while I have not seen them react yet, it is almost inevitable they will, as much as a dog chasing a cat) about the show, the content, how it is not good for people (a true statement) and all the other vices that one can either point out or imagine into and project on the show and all its creators.

America is not, nor has ever been, a “Christian country”. Christian majority at one time, certainly, but not any more. Therefore, it should not be a surprise that there is a direct correlation between the repaganization of society. After all, just as in ancient Roman society, it largely was not Christians attending the Coliseum, but pagans.

However, this is where the utter frustration with American “Christianity” should take place. It is not that Christians “should be” or “need to” stop such practices, but that there is so much complaining about them from said and declining bloc but so few actions taken.

It has been admitted for a very long time that TV is bad, and “American Christians”- which no matter what the sect one deals with (Protestants, Catholics, Orthodox, etc.) are all Calvinist-influenced unless one is very careful and judicious consistently about one’s actions and thoughts -continually put themselves into fights against these things.

I am NOT saying this happened in the story. What I am saying is, given that a fight will likely be started or calls of complaints heard from “American Christian” groups, what care should they have?

The US hates Christianity. This is evidenced by the proliferation of certain practices that Shoebat.com, along with a few other brave sites and other people, have aggressively talked about. The issue of sodom is serious, and yet the supermajority of American support it. If statistics consistently show that about 5/8 of the country supports their marriage regardless of age bloc and 75 to 80% for those under 40, and extrapolating those numbers one gets about 85% and 93% support of the act respectively, one should ask what one is going to fight against.

I am not saying that one should not take moral positions. But I am saying that the US is, sadly, in bad shape, and wants to be and is fighting as hard as she can to stay in said miserable shape. If this is the case, one should not try to fight it, but to accept the sad state and work in it. This means that even when bad things such as the above happen, to be a bloc of resistance, but not necessarily call for ‘mass action’ as though one has a power and influence that one does not have. It is the core difference between strategy and agitation, which is a distinction that seems to be lost on many people, especially those who say they are Christians.

Christians in America are going to have a difficult time in the future, much more so than now. Instead of fighting, it is time to prepare, and to admit that things such as this will increase, because really it is not about just “KYS”, but rather, against those who are considered social outcasts, of which Christians will much more so become in the future. There may be a time to rebuild, but for now, that time is yet to come. Rather than focus on the collapse of the USSR, it is better to focus on the fat that the metaphorical Politburo of our times is marching as the contemporary Chekist units are simply gathering their first organization and have yet to start any sort of great purge but undoubtedly have planned such.

COVID Furthers Anti-Natal And Fundamentally Eugenic Ends Of Revolution Started In The Late 19th Century
Do Not Celebrate That Sri Lanka Bans The Islamic Burka, Because The Saffron Swastika May Come Later
Follow