You are here: Home › Fire At Major Migration Center In Yemen For African Refugees Kills Dozens 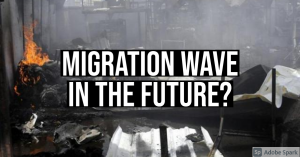 Shoebat.com has been warning that if trends do not change, a major refugee wave from Africa and the Middle East in coming, and it could make what happened in 2015 and 2016 look small by comparison. Such an event would build on previously existing trends

According to Arab News, there was a fire at a refugee center in Yemen for African emigrants, killing several dozen people.

Details have emerged of how a bungled attempt by Yemen’s Houthis to suppress protests at an overcrowded detention center led to dozens of African migrants perishing in a deadly blaze.

Anger has grown in Yemen and around the world after the blaze on Sunday in the Houthi-held capital Sanaa shone a spotlight on the Iran-backed militia’s “inhumane” treatment of refugees.

Graphic videos and images of burnt bodies have circulated on Twitter, with calls condemning the Houthi’s silence on the blaze.

The group has failed to provide an official death toll or revealed the number of injuries.

A senior figure in Sanaa’s Eritrean migrant community told AP at least 44 migrants were killed and that the death toll could be much higher.

Local reports suggested hundreds may have perished in the blaze at the facility housing 900 people. The fire took place in a hangar within the complex containing 350 refugees.

The UN’s International Organization of Migration (IOM) said at least 170 were injured and an unknown number had died.

Many local reports – including that of Yemeni human rights group Mwatana – claimed the blaze was started by the Houthi militia.

The fire took place days after migrants at the facility on Khawlan Street started a protest against mistreatment and poor conditions, according to Mwatana. (source)

The Houthis may be blamed here, but that is just one view. Indeed, the full details have yet to be discovered, and may never be in their entirety. However, the concept is what matters more, which is the potential, with such a refugee center destroyed, of continuing to encourage migration out of Yemen and to promote a ‘flow’ towards Turkey and Europe. Notice also how many of the migrants displaced here were Eritrean- the last major source of migrants in 2015 and 2016 to Europe, and likewise is again becoming similar due to the fact that the Tigray conflict has involved Eritrean forces.

Make no mistake, I am not blaming ‘migrants’ here, as many of them are suffering, confused, broke and broken people looking for something better than the desolation of their homelands, which has been directly encouraged by US and NATO policy for what appears the express purpose of creating social conditions that could start a greater conflict.

The situation of migrants is going to be critical to monitor. If things get worse and a crisis ensues, many of the trends that we have been warning about at Shoebat.com will accelerate greatly.