You are here: Home › Kosovo Opens Embassy In Israel 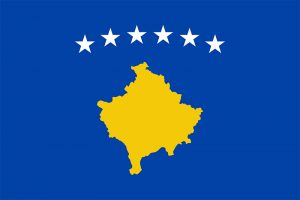 Kosovo is one of those countries that is a “country”. It may designate itself as a separate entity, but it little different from Donetsk, Lugansk, or various “republics” in the Caucasus area. It is not so much a nation as it is a political entity created for political purposes of the surrounding powers. Think more similar to Iraq, Belgium, or Macedonia, but just with a more recent history, and really a creation of the EU and US for policy purposes against Russia.

According to Reuters, the tiny nation has just opened its first embassy in Israel.

Kosovo opened its embassy to Israel in Jerusalem on Sunday, joining the United States and Guatemala as the only countries with embassies in a city whose status is at the heart of the Israeli-Palestinian conflict.

Muslim-majority Kosovo promised to locate its embassy in Jerusalem when it established diplomatic ties with Israel last year under U.S. sponsorship.

Kosovo’s Foreign Ministry said on Twitter that with the embassy’s opening, “the pledge given in the Oval Office today is finally fulfilled”.

Israel sees its new ties with Kosovo as part of its broader normalisation with Arab and Muslim countries under agreements sponsored by former U.S. President Donald Trump.

Wasel Abu Youssef, a member of the executive committee of the Palestine Liberation Organization, said the opening of Kosovo’s embassy in Jerusalem contradicted U.N. resolutions and aimed to “weaken the Palestinian cause”.

No date was immediately announced for a formal opening ceremony.

On Thursday, the Czech Republic opened a diplomatic office in Jerusalem, a branch of its embassy in Tel Aviv, a move that drew condemnation from the Palestinians and Arab League.

The status of Jerusalem is one of the thorniest obstacles to forging a peace deal between Israel and the Palestinians, who with broad international backing want East Jerusalem, captured by Israel in the 1967 Middle East war, as their capital.

Israel annexed East Jerusalem after the 1967 conflict in a move that has not won international recognition. (source)

The opening of the Kosovar embassy in Israel is a political move, and no accident it is happening at the same time that suddenly, large numbers of Arab nations are ‘legitimizing’ relations with Israel.

The results of what will come of this have yet to be seen, but it is very much a political issue, considering that the conditions for a major global conflict are forming. The nations see what is happening and are getting themselves set up, most likely, by this move. The ‘support’ of Israel does not necessarily convey a love of Israel, but rather a political alignment, as the likely bloc of opposition forming to the US will have its largest form in Russia attempting to revive the USSR in a modern form.

The age of empires is returning. Western Europe wants her empires back. Germany wants to play ‘kingmaker’ in Europe again. Turkey wants her Ottoman holdings back. Russia wants to revive the USSR. Of all the nations, Russia is in the hardest position because while the US has many faults, her promotion of an economic agenda that made a lot of people money or the opportunity to make it, unlike the wealth-draining that happened in the Soviet lands, has inclined many to side with the US. It’s not out of love, but rather in a fight between two major powers, one (Russia) will just take what one one has while destroying one’s land and not care, while the other (the US) will destroy and take, but also help rebuild, will give nice things or sell them at a cheap price, and generally leave one alone on many issues. One only needs to ask many of the people in post-Soviet bloc nations about the economic differences between life before and after, and the differences, and if they would want to go back to the ‘good old days’.