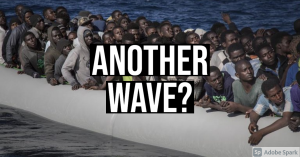 In addition to crossing the Mediterranean Sea and landing in Sicily or Italy, or crossing the Bosporus from Turkey and into the Balkans, migrants from Africa have been coming in the western regions by crossing from Morocco to Spain, either by directly over the Strait of Gibraltar, or into the Spanish enclave of Melilla before being transported into Iberia. Either way, its another route to Europe.

According to The UK Guardian, a curious report alleged that Moroccan police have been setting fires to migrant shelters near the Spanish border.

Migrants in northern Morocco said they had been forced to sleep out in the open after repeated raids by police, who allegedly burned down their shelters in camps near the Spanish enclave Melilla.

Those camped along the border said Moroccan forces returned for a fourth day on Friday despite having already torched most of their tents.

This week’s raids began after more than 150 migrants attempted to scale the fence between Morocco and the Spanish enclave on Monday. According to Spanish authorities, 59 succeeded in their attempt to enter EU territory.

A video sent to Alarm Phone, a support group for migrants in distress while trying to cross into European countries, appears to show the charred remains of migrants’ tents and scattered belongings.

“They were burning and destroying people’s belongings, both the tent-like structures they construct but also their personal belongings. People were really cold and distressed and slept rough because they didn’t have anything else to construct with,” said an Alarm Phone researcher.

They said the repeated early morning raids had put migrants on edge, fearing they will be picked up for detention while sleeping.

They said dozens of women and children were sent to the south of the country in order to get them away from the border, while more than 100 men have been detained.

The raids “come in waves … often as a reaction when a group has entered Spain,” they said.

The Nador section of the Moroccan Association of Human Rights has repeatedly criticised authorities for arresting migrants from sub-Saharan Africa in the streets of Nador and transporting them to the southern borders, where they can be kept in detention or deported.

Earlier in March, four people died within 30 hours attempting to swim to Melilla from a nearby Moroccan port, Spanish newspaper Okdiario reported.

There are about 2,000 migrants hiding from authorities throughout the forests near Nador, according to Moroccan media, hoping to reach Europe either by jumping the fence into Melilla or by taking a boat across the Mediterranean. (source)

It is true that Spain and Morocco have a long, antagonistic history. However, they also work together on many projects, as with other North African nations. Algeria works closely with France, Tunisia with France and Italy, and Egypt with the US and UK. Libya was the largest bloc of resistance prior to the murder of Ghaddafi, but now that he is dead, Libya has become an open door for the US and EU to import people into Europe, and has been one of the main trafficking routes for human smuggling from Central and East Africa. Remember, Coloniel Ghaddhafi said that he refused to let migrants pass, not because he hated them, but out of moral principle and the economic interests of his nation, which he rebuild prosperously and was rising until she was annihilated.

If it is true that the Moroccan police burned refugee shelters, it is likely- and more evidence would be needed to fully confirm this -that the police acted in cooperation with the Moroccan government, EU, and US.

Remember, I have emphasized that all of the conditions for another major refugee crisis are in motion right now as they were in 2015 and 2016. All that would be different is the volume of migrants, but the reasons would be the same.

During the last major crisis, Shoebat.com reported that the governments of the EU and US were helping traffick migrants through a series of NGOs and other businesses. This will likely happen again if the conditions repeat.