You are here: Home › Federal Agency Orders That ‘Anti-Discrimination’ Laws Apply To Lenders On LGBT 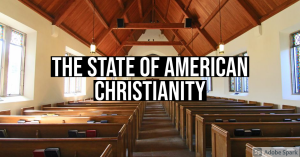 One of the major trends noted in the US is not merely the LGBT, but the enforcement of LGBT ideas and morality as a part of law under the cover of ‘anti-discrimination’, and to that, to effectively and indirectly criminalize Christian opposition to said issue. As such, it is coming to a point where being Christian is no longer considered a defense mechanism because to oppose the practices of Sodom is being made equivalent to opposing national law and supporting criminality. In this case, the culture war is already over, and no matter how much Christianity can be ‘Americanized’, it cannot overcome the fundamental philosophical problems because, contrary to the line given, the US is not nor ever was a Christian nation, there always was a fight between Christianity and secularism, but since the beginning as the situation always was given to favor secularism, ultimately it is secularism that would have to win.

Now as the Christian Post reports, another step towards this end has been realized as a federal agency has ordered that anti-discrimination laws apply to lending and LGBT.

The Consumer Financial Protection Bureau is the latest federal agency to announce its plans to enforce discrimination protections for LGBT individuals, citing a 2020 Supreme Court ruling that a leading conservative organization warns could have future implications for people of faith.

“In issuing this interpretive rule, we’re making it clear that lenders cannot discriminate based on sexual orientation or gender identity,” acting CFPB Director David Uejio said in a statement. “The CFPB will ensure that consumers are protected against such discrimination and provided equal opportunities in credit.”

But critics of the move argue that the Supreme Court’s ruling in Bostock v. Clayton County “botched” the interpretation of federal civil rights law.

“This is just the latest episode of federal bureaucrat activist lawyers and policymakers looking to make hay over the Supreme Court’s ruling in Bostock v. Clayton County, which botched the statutory interpretation of Title VII last year,” Weber said. “Despite the fact that Bostock dealt only with employment law, no doubt Biden administration activists will try to apply it wherever they wish.”

After President Joe Biden issued the “Preventing and Combatting Discrimination on the Basis of Gender Identity or Sexual Orientation” executive order in January, the Department of Housing and Urban Development announced it would enforce the Fair Housing Act based on sexual orientation and gender identity. (source)

It is not to say that Christians should ‘give up’. Rather, it is to note that the war on this front is over. The society has come to support sodom, the people want it, and laws are being passed to reflect the will of the people. The Christians have lost.

There may be a time in the future to make things right again. But now is not that time. It is better to prepare for the future, knowing that persecution and rejection are coming, and that to be a Christian will no longer be a sign of being a good person, social status, or something that brings honor, but will be associated with the opposite. In that sense it will be people who truly care that will be Christians, since those are the only people who will want to deal with the coming difficulties.