You are here: Home › More Men Prefer Gaming To Relations 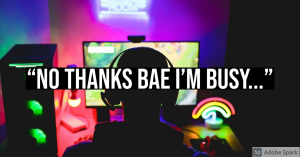 For years, there was talk about men getting ‘cucked’ by women, which while ‘cucking’ refers to either a voluntary or involuntary situation where a man in a relationship is given a second place by his girlfriend or wife to another man, it came to mean being a combination of being disrespected and defeated by another, especially by a woman.

However, it appears that a few years since then, the proverbial ‘tables have turned’ as now a new study has found that women are being cucked not by men, but video games as men are preferring to spend time playing them than pursuing relations.

Young men are giving up sex to play video games, a study has found. The US-based research found that computer gaming by men in their early 20s explained a quarter of the decline in their propensity to have casual sex.

The size of the decline was on a par with the current young generation’s growing distaste for drinking as an explanation as to why casual sex is becoming less common among people in their 20s, according to the study of 2,000 young men and women aged 20 to 24.

The researchers from the State University of New York and Rutgers University used regressive analysis to try to understand why today’s youngsters are spurning casual sex.

For women, the biggest factor explaining the decline in their casual sex lives was drinking, which accounted for a quarter of the drop. According to the researchers, no other factor stood out or was statistically significant.

For the men, however, of the key aspects of their lives which appeared to be having an effect, the largest was drinking followed by gaming.

Ten per cent was accounted for by the fact that they were still living with their parents.

The researchers, however, found there was “no evidence that trends in young adults’ economic circumstances, internet use, or television watching explain the recent decline in casual sexual activity”.

The reasons for the decline has been exercising academics.

Prof Simon Forrest, of the Institute for Health and Society at Newcastle University, said many young people tended to form long-term partnerships later in life, with people not settling down until their 30s.

“This is something that’s definitely changed a lot in the last 50 years,” he said. (source)

It is not a surprise this happened, or that it happened sooner.

Now it is good that fewer people want casual flings. This is not a bad thing. Hookup culture has needed to die for a long time because of the obvious moral first, then social implications of it. However, the fact that men prefer games speaks to another interesting concept, which is the decline of relationships as a whole. People are still marrying, but they are fewer, and there has been an increase in cohabitation or parenting outside of marriage. In other words, the trajectory is pagan, just in a context suited to the times.

Likewise, it is understandable that many men would prefer gaming. After all, for all the legitimate criticism of men, the women have and equally heavy burden that many refuse to acknowledge. One cannot have one’s cake and eat it too, because one cannot expect to be married and have a family while also being a “strong career woman” who acts wholly independently of her husband. The two do not mix, and even with working, that conflicts with family life until a woman is older and her fertile period is no more.

There was a famous series of experiments conducted in the 1960s known as the ‘mouse utopia’ or ‘rat utopia’ experiments, where basically, scientists provided mice with everything they could ever need. Eventually, what they found was that the females and males stopped caring about each other, the females would abandon their mouse babies, and the men would do nothing. Eventually, having become accustomed to laziness, they started to fight and destroyed themselves. The experiment, while some said it was about Malthusianism, rather illustrated the danger of a loss of purpose and meaning, and the ensuing breakdown of society, that while in an animal context, could happen to humans.

This situation with gaming over relations with women, while not a sure sign into itself, considered with other social factors should be looked at with concern, because perhaps the warning of the mouse utopia experiment may be closer to reality in the US and contemporary western life than what many would imagine to be such. Having lost a sense of meaning, direction, or care for the world, many are simply falling into a murky abyss of their own thoughts, and are giving themselves over to different forms of idleness or fighting but without thinking about the future. Since there is no society without children, and the failure to form relationships eventually means a social contraction, it is a reflection of trends I have discussed for a long while, where a lot of changes are coming to the US and most likely, many of them will not be beneficial.