You are here: Home › Vatican Rightly Declares She Cannot Bless Sodomite Unions Because They Are Sinful 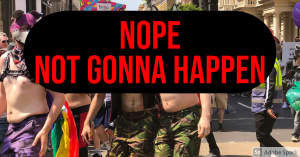 There is a lot of criticism about the Catholic Church, most of which at its root involves the actions of its members rather than the teachings itself. After all, it is not an exaggeration to say that Christians themselves, regardless of sect, are the worst advertisement for Christianity, and with Catholics as the largest consistent bloc, she would naturally be exposed to the most criticism. However, this does not speak to the reality of the teachings, for no matter what one desires or hopes for (and in spite of the ethos constantly emphasized in the US and especially by many Protestant sects), the beliefs matter before any sort of ‘community’ or other activity. This is not to say that one should not care about how others act, but that truth is not dependent on accents in as much as a ham sandwich is not defined by the brand of bread used, but by the fact that at its core, it is a slice of ham between two pieces of bread.

In a world that has been bowing to Sodom and in spite of the tremendous errors of many clergy- in fact, probably a simple majority of clergy at this point at least in the Western world -the Church has said and as reported by AP News that she is asserting Catholic dogma, which is that She cannot bless sodomite unions because they are sinful.

The Vatican’s orthodoxy office, the Congregation for the Doctrine of the Faith, issued a formal response Monday to a question about whether Catholic clergy can bless gay unions.

The answer, contained in a two-page explanation published in seven languages and approved by Pope Francis, was “negative.”

The decree distinguished between the church’s welcoming and blessing of gay people, which it upheld, but not their unions since any such sacramental recognition could be confused with marriage.

The Vatican holds that gay people must be treated with dignity and respect, but that gay sex is “intrinsically disordered.” Catholic teaching holds that marriage, a lifelong union between a man and woman, is part of God’s plan and is intended for the sake of creating new life.

Since gay unions are not intended to be part of that plan, they cannot be blessed by the church, the document said.

“The presence in such relationships of positive elements, which are in themselves to be valued and appreciated, cannot justify these relationships and render them legitimate objects of an ecclesial blessing, since the positive elements exist within the context of a union not ordered to the Creator’s plan,” the response said.

God “does not and cannot bless sin: He blesses sinful man, so that he may recognize that he is part of his plan of love and allow himself to be changed by him,” it said.

Francis has endorsed providing gay couples with legal protections in same-sex unions, but that is in reference to the civil sphere, not within the church. Those comments were made during an interview with a Mexican broadcaster, Televisa, in 2019, but were cut by the Vatican until they appeared in a documentary last year.

While the documentary fudged the context, Francis was referring to the position he took when he was archbishop of Buenos Aires and the country’s lawmakers were considering approving gay marriage, which he and the Catholic Church opposed. Then-Cardinal Jorge Mario Bergoglio instead supported providing legal protections for gay people in stable unions through a so-called “law of civil cohabitation.”

Francis told Televisa: “Homosexual people have the right to be in a family. They are children of God.” Speaking of families with gay children, he said: “You can’t kick someone out of a family, nor make their life miserable for this. What we have to have is a civil union law; that way they are legally covered.”

In the new document and an accompanying unsigned article, the Vatican said questions had been raised about whether the church should bless same-sex unions in a sacramental way in recent years, and after Francis had insisted on the need to better welcome and accompany gay people in the church.

In the article, the Vatican stressed the “fundamental and decisive distinction” between gay individuals and gay unions, noting that “the negative judgment on the blessing of unions of persons of the same sex does not imply a judgment on persons.”

But it explained the rationale for forbidding a blessing of such unions, noting that any union that involves sexual activity outside of marriage cannot be blessed because it is not in a state of grace, or “ordered to both receive and express the good that is pronounced and given by the blessing.”

And it added that blessing a same-sex union could give the impression of a sort of sacramental equivalence to marriage. “This would be erroneous and misleading,” the article said.

In 2003, the same Vatican office issued a similar decree saying that the church’s respect for gay people “cannot lead in any way to approval of homosexual behavior or to legal recognition of homosexual unions.”

Doing so, the Vatican reasoned then, would not only condone “deviant behavior,” but create an equivalence to marriage, which the church holds is an indissoluble union between man and woman. (source)

This is not a special teaching. This is Catholic teaching 101 that has never changed and never can change no matter who say or implies or suggests or declares anything. It is as able to be changed as man has the power to revoke the law of gravity- man can scream what he wants, even from the rooftops, but the proof is found when he jumps from the same rooftop and falls to his death.

Christ promised that His Church, founded on St. Peter, would never have the gates of the netherworld prevail against Her. This was promised to no other apostle than He. It does not mean that great evils may happen, or major scandals, or problems of every sort. In fact, if the Church did not experience the very worst of humanity, Her designation might itself be questioned because Christ died for the sins of all the human race, and He came for the purpose of calling all men unto Him, and as a result if He established a Church into which to draw them, there is not a sin that exists which the Church has not been exposed to. It is a profound thing to think about because it means that, without exaggeration, the Church has been exposed to everything that is possible or if not yet, will be possible, yet She is still standing, and it is not because of anything that man did, but because She is guaranteed by Christ Himself.

This is why I do not worry so much about heretical priests, bishops, or even evil popes, because the barque of St. Peter may be turned and tossed and severely beaten by the waves of time, but She NEVER can capsize and sink. Sacred Scripture is clear on this, and so also is Sacred Tradition, and if one claims to be a Christian, why does one want to deny Sacred Scripture and Tradition?

The world hates the Church because she has always hated Christ. The sodomite issue, no matter how many priests may bend over for sodom or abuse the Church and Her teachings severely, cannot change truth. It’s that simple. This will only become more obvious as the world becomes more obviously pagan or just anti-Christian.

So fear not, and don’t worry. This was going to happen, and it is better that it does because it is better to expose the obvious problems so they can be identified and deal with as well as those figured out who stand where on what issue instead of pretending that an issue does not exist.