You are here: Home › So Much For ‘Fossil Fuel Shortages’ As Report Says World Gasoline Demand May “Never Recover” 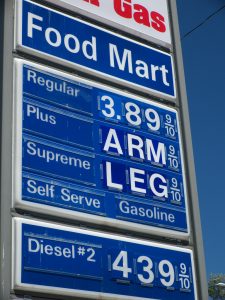 For many years, American cars have been associated with gas-guzzling in overabundance and other forms of indulgence. However this may be changing, and not just in the United States, as the AP reports that world gas consumption has significantly declined and will continue as a trend in a future to decline.

The world’s once-insatiable demand for gasoline is unlikely to recover to pre-pandemic levels, according to a report Wednesday from the International Energy Agency.

Gasoline use cratered during the pandemic as cities shut down and many people began working from home, a trend that will likely continue as the COVID-19 crisis eases. Many governments also have been pushing for low-carbon alternatives.

Oil demand, meanwhile, is expected to continue rising as developing countries with growing populations use more of the fuel. But it is not expected to return to pre-pandemic levels until 2023, according to the Paris-based intergovernmental agency.

Gasoline demand is unlikely to fully return because increased demand in the developing world will be offset by consumers shifting to electric vehicles, manufacturers improving fuel efficiency and businesses increasing telework while decreasing travel, the report said.

Meanwhile, gasoline prices have surged. Americans are paying 14% more for a gallon of regular than they did in February, and 29% more than a year ago, according to AAA.

That spike has been caused in part by Texas storms that knocked out power to millions of residents and took several oil refineries offline. The price of gasoline has also been boosted by oil prices that have risen along with expectations of economic recovery as coronavirus vaccines are distributed. (source)

We knew for years that world gasoline prices were going down. This was evidenced by the covid-19 crisis. You remember last year on the prices of oil and gas were dropping so much that gasoline and oil was being dumped by major companies around the world? It wasn’t just in the United States- this is a big problem in Russia because Russia relies heavily on petroleum petroleum product exports proposed to her economy.

Ask yourself this one question- Why are gas prices going up at a time of such an abundance of petroleum? It doesn’t make any sense. If anything prices should be going down reason for this is very simple- supply and demand. If the demand for gas is falling, that means there’s going to be an overabundance of supply. Naturally, it only makes sense that the price would drop. The reverse should be the case if it was an over-demand of the product and a lack of supply. In that case, the prices should increase, and that would be natural. We are not living in a natural economy. We are living in a very manipulated economy. The increase or decrease in the price of gas is more a sign of policy that it has to do with you economic reality.

Do you remember the people for years who peddle the idea that fossil fuels were in a short that the world was going to have a great economic collapse as a result of it? ask yourself where have all those people gone? It would be very interesting to see them now, asking them about the future that they envisioned, of a future where fossil fuels were unavailable and that the world returned to a sort of pre-1850s type environment, because it doesn’t seem to be a reality anymore.

The fact is, there never has been a shortage of fossil fuels. In fact, there are so many fossil fuels in the world we have an overabundance of supply, enough to last for many centuries more. consider for example how the entire Volga Basin region- the area around the Caspian Sea and the black Seas – is one giant oilfield. This is a known fact that has been known since the 1840s – the year that that the first oil was industrially extracted, which began in that region, and there is so much more oil there that is untapped it is only for one to imagine how long it could power the world for.

The point is that oil is not going anywhere. The trends are that policy is changing, and the price shifts indicate this more than anything else.

Because of the decreased range which electrical vehicles have in which to operate, and knowing that there is a push toward the formation of supermetropoli, it will be interesting to see how this trend of reduced (by natural or unnatural means) gas usage correlates with a restructuring of the travel industry as well as the social dynamics of small towns versus big cities. Jobs are and will leave small towns, and these people will be funneled into larger cities out of a need to find work. This is not an uncommon phenomenon throughout human history. However at the current time, and given the current social and political circumstances, it could lead to a very interesting future in over the next 30 years in the countryside, as it is likely to continue to rot away worse than it already has been doing.

However, for the current time, what we can say is that at the very least, the gas prices are going to go up, and the political parties – both Democrat and Republican – will blame each other for the crisis and use it as a way to continue to leverage tension inside the country against US foreign political enemies, with the eventual goal of pushing for an all-out foreign war. Nothing has changed trend wise, it is just that this is another step following the common trajectory we have been warning about.

The Atlanta Shooter Is An Example Of The Dangers Of Incels
Three Children Immolated In Horrendous Fire, Sakhalin Mother Arrested
Follow