You are here: Home › The New Face Of Captain America Is Just A Reflection Of What You Have Been Warned About 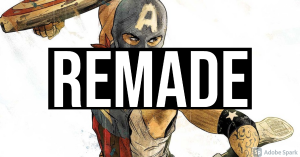 Captain America is a pop-culture comic book hero who makes his enemies who fight against him bend the knee to the force of justice. However, instead of bending the knee, it may be now that he has them rather bend over, as Hollywood Reporter notes that Captain America is getting a new makeover as not just an American hero, but a pro-LGBT hero of which he is also a member.

Marvel Comics has unveiled a first look at a new Captain America.

The new character, Aaron Fischer, represents the first LGBTQ character to pick up Cap’s shield in the comic’s 80-year history.

Fischer is described as “the Captain America of the Railways — a fearless teen who stepped up to protect fellow runaways and the unhoused. Marvel Comics is proud to honor Pride Month with the rise of this new LGBTQ+ hero.”

The limited series is titled The United States of Captain America and follows “Steve Rogers teaming up with Captain Americas of the past — Bucky Barnes, Sam Wilson and John Walker — on a road trip across America to find his stolen shield. Throughout the group’s journey, they’ll discover everyday people from all walks of life who’ve taken up the mantle of Captain America to defend their communities.” The series is written by Christopher Cantwell with art by Dale Eaglesham. (source)

Captain America is a celebrity thing. It’s not the most important news in the world by far. However, as with many things in life, it is the small things that make a big difference.

For years, one of the points I have made is that politics and culture reflect the people who make them, for good or for bad. Hence the problem in a society is not “the politicians”, but often a problem “in the mirror”. There are always troublesome individuals or groups that are intractable, but if said individuals or groups are not subjugated or otherwise put under control and their influence allowed to spread out of control, real problems can take over a society. It does not matter what the context is, because a fire left to its own may spread and consume anything in its path.

Many have written about the “Gay Manifesto” published in 1987. What was warned about has come to pass, where the acceptance of the LGBT is now not just commonplace, but an unspoken prerequisite to participation in American life. One does not oppose such without consequence, and the changing laws are only a reflection of the new reality. A similar comment can be made about gun laws, and how they are becoming more restrictive, because it is not just “the liberals”, but a reflection of a long-term values change manifesting in the choices people make.

Thus it is the same with Captain America. The cartoon is a reflection of, like with politicians and other things, the perceptions that people have of themselves and others, as well as their values.

Those are very high numbers. They are so high they are able to change the Constitution. They represent in the period of three decades a complete shift in social thought.

With such a massive change, the question that people should ask is not why is Captain America sodomitic now, but when was he going to become sodomitic.

This is why it is important for people to realize that the culture was is over. It’s done, stick a fork in it done. Now is not the time to ‘fight’ because there is nothing more to fight that one can reasonably be expected to ‘win’ at. The society was given the chance to choose sodom or something better, and her consistent choices mean she chose Sodom.

Inevitably, this also carries with it serious moral consequences, as God is not changed nor is moral law abolished by the actions of man in as much as laws, declarations, or proclamations do not abolish the law of gravity. Instead, they only make it that one cannot ascertain reality while still inevitably being forced to reckon with the consequences of the same reality.

The passing of Captain America to sodom should not be bemoaned too much, but rather the passing of the culture that created it to another form. This is one of the great errors, one might say, of the so-called ‘Christian right’ in the US, to confuse the perversion of cultural figures with the perversion of the people who made up the culture as not just a passing aberration caused by a few individuals or select groups, but as something that has fully consumed the culture and those in it may not even realize they have been consumed in it.

Let history be a reminder to all that, only for the grace of God and the promise of Sacred Scripture by Christ Himself, the Church is the only institution from the ancient world that has survived and continues to survive, and She will not perish, because She is the divine trust of which Christ is Her Guarantor. The US, for all of the amazing and exceptional things that she has and has done, is not an exception to history. The embrace of the practices and mores of sodom is, historically speaking, always a sign of degeneration no matter who the people in question is, and what does this mean when one considers that the US is possibly the most exceptional nation in promoting and forcing sodom on the world?

If one is a Christian, consider that God destroyed those seven cities on the plains as a sign for all time of the wickedness of this sin. If such a strong examples was to be made of seven cities, what is to be said of not merely a world that has largely inclined to the ways of those seven places, but in particular of perhaps the largest epicenter from which said perversions have been advanced?

Forget about the chants from the Christian right of ‘God bless the USA’, but perhaps one might try ‘Kyrie Eleison’ and ‘Repent and turn from sin’ lest the society merit the fruits of labor for the potential future that awaits.