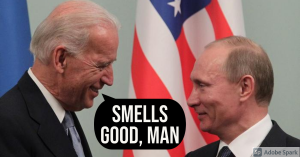 After a series of comments about Putin from Biden, the Russian President has fired back, challenging Biden to a public, live debate.

Russian President Vladimir Putin has reacted to President Joe Biden calling him a “killer” by challenging Biden to take part in a conversation with him broadcast live online.

“I’ve just thought of this now,” Putin told a Russian state television reporter. “I want to propose to President Biden to continue our discussion, but on the condition that we do it basically live, as it’s called. Without any delays and directly in an open, direct discussion. It seems to me that would be interesting for the people of Russia and for the people of the United States.”

Putin’s invitation seemed to amount to a challenge to Biden to a live televised debate, following a day of diplomatic uproar that began when Biden said he thought Putin was a “killer” in an interview with ABC News’ George Stephanopoulos. Russia recalled its ambassador to the United States in response to the remark.

“I don’t want to put this off for long. I want to go the taiga this weekend to relax a little,” Putin said. “So we could do it tomorrow or Monday. We are ready at any time convenient for the American side.” (source)

I couldn’t resist the title. Given the image that both the US and Russia have been trying to respectively portray, it was just too perfect.

But really. Take a minute and sit back here and think what is really going on.

Does one really think that these two will debate? Don’t be unrealistic- this is not going to happen, and not because of either Biden or Putin, but because of politics.

I have said many times that optics often matters more than reality. The reality, however, is that the US is in a far better position than Russia for many reasons. Both have similar problems, but Russia is about 2.3 times the size of the US with 40% of the people, a lower fertility rate, a lot of historical baggage with her neighbors, crumbling infrastructure, abundant resources but no real economic development save raw materials exports, certain industrial products, and weapons. This does not include the rampant alcoholism, serious environmental damage, and the real potential for serious internal rebellion that threatens the fabric of her existence- people speak about a “Texit” or a “Calexit”, but those are laughable when one thinks about the possibility of the PLA marching into the Dalny Vostok, or the potential for any kind of pan-turkism taking a serious hold in Tatarstan or Bashkortostan, just as two very tiny examples.

Another point I have said is that the Anglosphere is a master of lying. However, the Russians are masters at bluffing, and far outdo the Anglos. This is important, because when Russia tries to lie, she just looks foolish and as though she is trying (and often in truth) to cover up a crime but is doing a very bad job and all can see through her lies. However, the Russian bluffing is able to confuse, deceive, and misdirect those in the Anglosphere successfully. This is used by the Russians to their advantage, and generally with success. One of many examples of this are the photos of Putin as the so-called “Chad Vlad”, where Putin has photos takes of him galloping shirtless on a horse, diving for “artifacts” he just happens to find, or like in this example (cue the special effects) WHERE REAL ALPHA MALE BASED VLAD CHALLENGES GERIATRIC BRAIN DEAD SOY CUCK AMERICAN WEAKLING TO DUEL.

It’s admittedly a rather well-done trolling job by the Russians. Indeed, credit should be given where it is due. However, all of the trolling that one can do, regardless of the side, does not substitute for reality.

The US has weaknesses, and serious ones. As I have pointed out, however, these are related almost entirely to infrastructure or internal geographic concerns divorced from the political. For example, an incident that disrupts the logistical sector of trucks, trains, and planes that keeps the US running efficiently, or a major natural disaster like a volcano eruption, earthquake, hurricane, tornado, or winter storm that knocks out systems or causes other kinds of disruptions. These are not the kinds of things the Russia has to worry about, as noted above, which are not just more “traditional” worries that countries have, but are more dangerous and more difficult to control. The US has the added security of geographic distance. Talk about Chinese/North Korean/Russian/United European Military soldiers marching on US soil? Good luck getting them across the Atlantic or Pacific without being nuked before leaving port in Asia or Europe, or facing an on-shore storming against the US military, let alone if one manages to occupy the US, fighting off against the hordes of marauding militias formed by the Travises, Jervontes, and Pacos of the US who would rejoice at the opportunity to funnel their blood lusts into murdering occupying soldiers for fun and then profit all under a patriotic cover.

A real question one might want to ask, having noted that it is not just ‘leftist propaganda’, but there are real concerns there may have been serious collusion between the Trump campaign and the Russian government (just as the concerns about the Biden-Clinton relationship with China are also real and based on real concerns), it gives one to wonder what is really going on. Could perhaps the current statements by President Putin be made as part of a larger public perception management campaign by the Republicans against Biden, remembering that during the Obama years, similar promotions of “based Vlad” were also made during that time and which also helped to bolster the image and spirits of the political right? Likewise, could it be possible that within this, there is a dual attempt to use acceptance of funds and promotion by both the Russia and Chinese governments to the Republican and Democrat parties respectively as an attempt to eventually cause a rift between Russia and China themselves, knowing that their “alliance” is only in name because of the genuine dislike both have for each other?

There is a lot here that we don’t know. The above is speculation, and simply asking questions about what are very interesting circumstances. But noting this, we can say that, at the very least we can say is that something is going on, but the least important thing is to look at this as a competition between “Chad Vlad” versus “Senile Grandpa Joe”, or whatever other terms are used, because they both obscure reality and simply feed the current narrative. For those who believe otherwise, one might also want to wait for the Russian shipment of their soy crop to China as well, all courtesy of Lysenko’s farm in Potemkin Village.