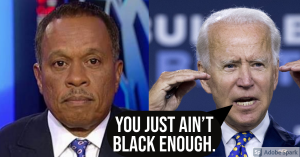 Biden famously quipped “you ain’t black” to black people who refused to vote for him in the 2020 election. However, with hardly a word said about this and with the masses of people submitting to and accepting Biden without so much as a single criticism about this or other actions, the pattern seems to be continuing, as now the famed black media commentator has claimed and is being reported by Mediaite that he was dumped from a PBS discussion panel, by a white host, because he was not ‘black enough’.

Fox News host and political analyst Juan Williams said an invitation to participate in a PBS-affiliated show focusing on social justice was withdrawn after the host of the show found out Williams was from Panama.

Williams, who co-hosts The Five on Fox News, received the award for Talent Reflection of Inclusion in Television at the CultureX Conversations Awards on Tuesday. In his acceptance speech, he shared the story of how he was invited to be a guest on a PBS show about the racial justice protests that followed the death of George Floyd. Williams said the host withdrew the invitation before Williams could respond.

The show that extended the invitation to Williams is This is America & the World, hosted by Dennis Wholey, Mediaite has learned. A spokesperson for PBS told Mediaite that the show “is not a PBS program,” and that “while this show might run on a small number of member stations, it is not offered by our national feed and is not produced by PBS.”

“The host explained that his research showed, and here I’m going to quote him, Juan’s background is one hundred precent Panamanian, end quote,” Williams said. “The white host said he is a fan of my work on television, but my background didn’t fit with a program about Black protest. How insulting.”

Williams said that he was born in Panama, and has lived in the U.S. since he was four years old. He said that the results of an Ancestry.com profile revealed that 50% of his background comes from Benin, Togo, Nigeria, and the Ivory Coast, 30% comes from India, and 20% comes from Scotland, Ireland and Norway.

“It’s also true that my dad is a Black man. He was born in Jamaica,” Williams said. “My mom is a woman born in Panama to a father from India and a mother of African descent who was born in the Caribbean.”

“As you can see, I’m mostly black,” Williams said, adding that he grew up speaking Spanish and English. “I went to school and lived in low-income Black Brooklyn … I know my way around a lot of people and out of a lot of stereotypical boxes.”

Williams reminded the audience that he has worked for The Washington Post, NPR, and The Hill, in addition to Fox. He has also written several bestselling books about Black history, including a biography of Thurgood Marshall, and a book This Far by Faith: Stories From the African-American Religious Experience, that accompanied a PBS series.

“Yet to a white PBS host, I’m not a good choice, not the right identity somehow to talk about our nation’s dealing with race,” Williams said. “He saw my Central American birthplace and he put me in a box.”

According to Williams, the host’s actions represent a larger issue in media.

“This is the kind of racial, cultural and gender blindness that still limits opportunities for too many in American media,” Williams said. “It can come from executives who think all Latinos should have light skin or all blacks should think alike. Some seem to think their ratings are safest in the hands of blonde women and white men … somehow they see only risk in staging a realistic symphony of American voices, a symphony that would carry across lines of race, culture and gender.”

“You know,” Williams added, “that symphony is the real America.” (source)