You are here: Home › Volcano Erupts In Iceland For The First Time In Six Thousand Years 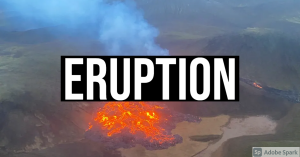 Iceland has a lot volcanoes, but according to Fox News, there was a particularly special event today as one that has not erupted for six thousand years just did.

A volcano near Iceland’s capital city and the country’s Keflavik International Airport erupted Friday after sitting dormant for 6,000 years.

The Department of Emergency Management said it was not anticipating evacuations because the volcano is about a mile and a half from the nearest road.

“We are monitoring the situation closely and as of now it is not considered a threat to surrounding towns,” assured Iceland Prime Minister Katrín Jakobsdóttir. “We ask people to keep away from the immediate area and stay safe.”

No injuries were reported in the incident, although traffic jams frustrated drivers, according to The New York Times.

The Icelandic Meteorological Office (IMO) tweeted that the eruption began at around 8:45 p.m. GMT and that it is “considered small at this stage.” (source)

Now this story is not significant because of a volcano, but because of the time, and other geographic issues that could affect the US.

I have said before that the US faces no real threat whatsoever save for those related to infrastructure and natural disasters, the former being a solely internal self-made issue and the latter being beyond one’s control but particular to her own circumstances.

It is known that when one major geological event happens, it can prepare the way, sometimes up to a decade or two in advance, for other issues to happen. Thus an unexpected earthquake or volcano eruption may cause reactions under the Earth that bring about more or another serious eruption or incident in the future.

It is known that there are at least tow major fault lines (San Andreas in California and New Madrid in Missouri/Illinois) and one supervolcano (Wyoming) that if any of them were to have an incident, it would be incredibly destructive to the US.

Considering the current state of world affairs, witha world inclining to war as well as moral degeneracy, it is interesting that such a unique volcanic eruption, one not seen since the days of Noah, has taken place.

It will be interesting to see if this has or is a sign of other geological changes that may trigger other, and perhaps unexpected events in the future in the US.

More Risks To Health, Or An Attack On The Concept Of Homeschool?
One Year Later, Shoebat.com Major Supply Chain Squeeze Prediction Starts To Come True, Reported By Business Insider
Follow