You are here: Home › When The Pot Boils And No One Notices 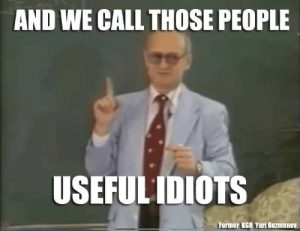 Many years ago, when I was in university, I used to do a variety show several times a week on the college radio station. I enjoyed it a lot, and instead of commercials, we played public service announcements from a number of organizations. One of the sources was the Rutherford Institute, administered by John Whitehead, who would discuss matters of civil rights and concerns about maintaining them.

Now much has changed in about two decades, as this is just about the unit of time it takes for a complete generation of people to pass. Looking back over this time, it is clear that if one looks at matters such as personal privacy, personal freedom/rights, and the ability to express oneself in a sane, safe manner, all have significantly declined in favor of a pseudo-religious orthodoxy of sociopolitical opinion that is assumed all do or should accept and those who reject it, while still legally permitted and even tolerated, are finding that their toleration has notably declined to the point of if not now, then in the future being in legal jeopardy. This has been expressed on a number of issues, of which the most notable one I have tried to emphasize is the banning of practices or expression of ideas that while not directly so, would constitute and indirect ban on Christian morality and practice itself.

According to another recent article from the Rutherford Institute and reprinted by Zero Hedge, the very surveillance state warned about and alluded to almost two decades ago has advanced so much that it is at the current time a reality, creating an electronic ‘camp’ of sorts where all are under surveillance all the time.

With every new smart piece of smart technology we acquire, every new app we download, every new photo or post we share online, we are making it that much easier for the government and its corporate partners to identify, track and eventually round us up.

Saint or sinner, it doesn’t matter because we’re all being swept up into a massive digital data dragnet that does not distinguish between those who are innocent of wrongdoing, suspects, or criminals.

This is what it means to live in a suspect society.

The government’s efforts to round up those who took part in the Capitol riots shows exactly how vulnerable we all are to the menace of a surveillance state that aspires to a God-like awareness of our lives.

Relying on selfies, social media posts, location data, geotagged photos, facial recognition, surveillance cameras and crowdsourcing, government agents are compiling a massive data trove on anyone and everyone who may have been anywhere in the vicinity of the Capitol on January 6, 2021.

The amount of digital information is staggering: 15,000 hours of surveillance and body-worn camera footage; 1,600 electronic devices; 270,000 digital media tips; at least 140,000 photos and videos; and about 100,000 location pings for thousands of smartphones.

And that’s just what we know.

More than 300 individuals from 40 states have already been charged and another 280 arrested in connection with the events of January 6. As many as 500 others are still being hunted by government agents.

Also included in this data roundup are individuals who may have had nothing to do with the riots but whose cell phone location data identified them as being in the wrong place at the wrong time.

Forget about being innocent until proven guilty.

In a suspect society such as ours, the burden of proof has been flipped: now, you start off guilty and have to prove your innocence.

For instance, you didn’t even have to be involved in the Capitol riots to qualify for a visit from the FBI: investigators have reportedly been tracking—and questioning—anyone whose cell phones connected to wi-fi or pinged cell phone towers near the Capitol. One man, who had gone out for a walk with his daughters only to end up stranded near the Capitol crowds, actually had FBI agents show up at his door days later. Using Google Maps, agents were able to pinpoint exactly where they were standing and for how long.

All of the many creepy, calculating, invasive investigative and surveillance tools the government has acquired over the years are on full display right now in the FBI’s ongoing efforts to bring the rioters to “justice.”

FBI agents are matching photos with drivers’ license pictures; tracking movements by way of license plate toll readers; and zooming in on physical identifying marks such as moles, scars and tattoos, as well as brands, logos and symbols on clothing and backpacks. They’re poring over hours of security and body camera footage; scouring social media posts; triangulating data from cellphone towers and WiFi signals; layering facial recognition software on top of that; and then cross-referencing footage with public social media posts.

It’s not just the FBI on the hunt, however.

They’ve enlisted the help of volunteer posses of private citizens, such as Deep State Dogs, to collaborate on the grunt work. As Dinah Voyles Pulver reports, once Deep State Dogs locates a person and confirms their identity, they put a package together with the person’s name, address, phone number and several images and send it to the FBI.

According to USA Today, the FBI is relying on the American public and volunteer cybersleuths to help bolster its cases.

This takes See Something, Say Something snitching programs to a whole new level.

The lesson to be learned: Big Brother, Big Sister and all of their friends are watching you. (source)

Some people will warn about a future similar to East Germany, with being monitored by the Staatsicherheit, known as the Stasi. Others talk at length about the Chinese Social Credit System, which gives ‘points’ to people and thus extends or denies them permissions based on it.

But so little is said about the US, which as I have noted for a long time, is or could become arguably worse than what exists in China, not because of outward abuse, but because of the potential to realize the same effects without the nasty public consequences that leave people angry and threatening to do things to disrupt or oppose the system. This is what makes the US approach so much more effective, and really the approach for all of the Anglosphere. The Russians are better than the Chinese by far at doing this as well, but they still generally lack the same tact that is found in the Anglosphere. This goes back to the same observation I have made before, that the Anglos are masters of lying but not bluffing, the Russians are masters of bluffing but not lying, and the Chinese are terrible at both.

The big lie in the Anglosphere, which people seem generally to accept is that somehow the above system is not or would not come to here. They may genuinely believe this lie, or they may know it is a lie but propagate the lie still. It does not matter which one is chosen, because the effect is the same. There are certain ‘tenets’ of public life that assumed accepted by all, and those who do not accept said narrative are not necessarily directly rejected, but certainly makes one into a sort of social leper. This can be applied to many things, including the ability to investigate or talk about controversial or issues made into controversial things.

Ask yourself, where has the public conversation gone about issues such as Wikileaks exposing not just a small amount, but the entrenched surveillance into many different kinds of electronic hardware? What about the abuse of minors carried out by politicians and business figures through Epstein’s actions that clearly has a systematic and politically dangerous nature to it? What about the curious Hunter Biden tapes? Why has nothing been done about it? The answer seems to lay in the above explained dynamic, which has the effect of pacifying people that allows for a passive, plausible denial without ever actually providing evidence to substantiate it, creating the conditions for a lie to be inferred and communicated and isolating and creating the conditions for stigmatizing those who attempted to raise the question out of often genuine concern. It is an interesting combination of exploiting the slothful creature comforts and deincentivizing personal efforts in combination with select lies or partial truths to reshape perception so that while the issue itself does not go away, the ability to threaten its power has been mostly defanged.

People ask “Why is [insert issue here] happening to the US?], but the answer is there. Having no reason other to live than for the self, and with the concept of God or eternal life being mostly an idea that is connected with national identity for many and for others is not even a question, divinity is sought after in earthly things, and in all such thing, darwinism of some sort of form becomes the rule, and truth is what one accepts as opposed to what is. Thus, when all is well it is very well, but when problems happens, not only can they be ignored, but those who pointed out the problems can be shut down instead of dealing with the problem itself.

In other words, it has all and more the power to control people of the Chinese social credit system, but without the effects of causing people to possibly hate it, but like it all the more. It is creating a prison cell that is not immediately hard, but is comfortable. Yet nevertheless, it is the same, and if necessary, the concrete floor can be exposed immediately should it be deemed to be politically desirable.

The frog, as one might say, has boiled in the pot, and scarcely anyone has seemed to have noticed.

Oh No, Senile Joe Falls Going Up The Stairs Not Once, Not Twice, But Three Times
More Risks To Health, Or An Attack On The Concept Of Homeschool?
Follow