You are here: Home › Not A Surprise- New Study Suggests Evangelical Equivocation Of Religion And Politics Is Destroying Religion 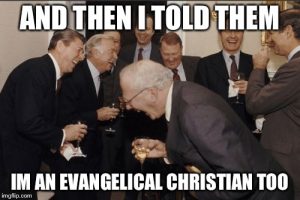 For a long time on Shoebat.com, I have held that the Protestant Revolution, like other previous and still happening movements that lead to a schism or heresy, equivocates politics with religious practice. This happens because there is a natural overlap between both- if one is to be in the world, one needs to direct one’s life according to ones faith, and since men must be governed, that one would create policies and philosophies on which to practice said objective truths. Some of these attempts have been better than others, but there have always been two main struggles- the struggle of the Church against being dominated by the state or ruling class, and that of the Church to assert divinely revealed truth to the ruling class. This might seem like a ‘duality’, or a ‘creative tension’, but this should not be spoken of like this, because it is not about balance between disparate groups, but asserting the rightful order of things in their due proportion. This is why Christ is both the ultimate revolutionary and the end to all revolutions, since He is not merely a King, but like an Emperor over many kings of many lands, races, and peoples, and like the Romans, He submits to no one because there is none higher than He.

Thus to be a Christian has a political side, but the political must proceed from and is wholly separable from the philosophy it is based on. In other words, there is such as thing as ‘Christian politics’, but at the very least, it is not something is limited to any one school, can be found in many schools of different thought, and is applicable to all people, as it is a reflection of divine truth and most importantly, it is subject to the Faith. Some Protestants will complain about the “Pope” and attempts to “rule” their domains, but this is because the Church supercedes the state since while the Church does not rule the state, She contains and preserves in Her the germ of faith, the spark of divine teaching given to Christ. Her men may fail and do bad things, but she is separated the trustee that contains the deposit of Faith deposited by God as guarantor to Her. A society can rise high to power without Her, but it will lack the moral fibre neccessary to not just stem the cycle of revolution of government collapse and replacement, but more importantly, to preserve the souls of the people against the darwinism of a post-original sin world. It doesn’t guarantee safety from problems, but like a plant cut to its root, it keeps the root alive so that even in the worst conditions it may be regrown again.

This is the reason why all heresies eventually ‘burn out’, because they have a life span and lacking this spark, their plants will and do die. This is happening right now to American Evangelicalism, as the Christian Post reports that many in particular Evangelical Christians are leaving their churches because of the conflation of religion and politics.

The marrying of religion and politics among conservatives to create the well-known and powerful religious right that forms a voting bloc for the Republican Party has led some Americans to abandon their ties to the Christian faith and join the ranks of secularists, scholars argue in a new book.

Political scientists David E. Campbell and Geoffrey C. Layman of the University of Notre Dame and John C. Green of the University of Akron present their findings in their recent book, Secular Surge: A New Fault Line in American Politics, showing that the secular left has arisen in response to the religious right.

The researchers present evidence suggesting that many Americans have an “allergic reaction” to the mixture of religion and conservative politics, and many Democrats have been shown to drop their religious affiliation — if being religious means being Republican.

With the religious imagery on display during the Jan. 6 attack on the U.S. Capitol, the researchers believe even more Americans could drop their religious affiliation.

Pew Research Center data, culled from telephone surveys conducted in 2018 and 2019, shows a 12-percentage-point decline in Americans who identify as Christians compared to a decade earlier.

The data indicates that only 65% of Americans currently identify as Christian, while those who identify as religiously unaffiliated swelled to 26%.

And while the decline is happening across multiple demographics, it is most pronounced among young adults.

“The changes underway in the American religious landscape are broad-based,” Pew researchers wrote at the time. (source)

Shoebat.com has been warning about this trend for a long time. It has become very clear based on the statistics this is happening. The Catholic Church has had her losses, but they have mostly stabilized, and Her problems, aside from the fact that the Church is guaranteed by Christ Himself in Sacred Scripture, are not new. The Evangelical issue is a more pressing issue, since that has come as a shock to many and is falling fast even though the signs of her fall were in the making for a long time. She won’t fully disappear, but as a major social and political force, she will be defanged from what she previously was, as part of the continuing trend of secularization.