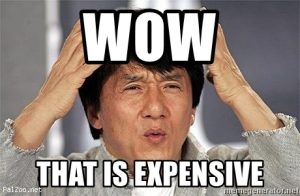 Exactly one year ago, I wrote an article called “Buy Your Tools And Stuff From Dollar Stores Now Because That May Be The Next Shortage“. It was an observation about trends I had become aware of in the tools market, suggesting that in as early as six to nine months- which would represent the time it takes for a given series of orders made in the Far East to arrive for sale on American shelves -one could start seeing tool shortages as well as that for other commodities, as well as likely price increases. As I warned, buy your tools now, because the prices are likely going to increase.

I have seen some of this happen already. Both Harbor Freight stores mentioned I still visit, and I have seen the shortages emerge there. The local tool store I mentioned is still in business, but they have some shortages and they have been slower to restock, although business has been well for it. Now while I was reading Business Insider, of all things, the publication had report about how major supply chain shortages that will affect the economy.

You might have noticed that you’ve been shelling out more for things like houses, gas, and cars. And it’s been hard to get your hands on things like fitness gear, sofas, and roller skates.

That’s because America is reopening to a more expensive economy than the one that existed pre-pandemic.

For now, it has a lot to do with a shortage of materials that manufacturers need to make these things. When supply is low, prices climb for manufacturers, and consumers end up paying more for the end product.

The materials shortage has to do with several factors. The work-from-home economy placed unprecedented pressures on companies that both struggled to estimate demand and halted factory production for safety reasons. And as imports have picked up speed on the back of surging, unpredictable consumer behavior, US shipping ports have become unusually congested. February’s Texas Freeze compounded these problems, suspending the oil sector and the manufacturers who rely on it.

Tight capacity, low inventory, and a fiscal stimulus have created the “perfect storm” in freight transport markets, according to a recent UBS note by a team led by Thomas Wadewitz. Supply deliveries are at their highest level in 40-plus years, Jan Hatzius wrote in a Goldman Sachs note.

It’s a sign that both big-ticket and everyday items, from hot tubs and bikes to meat and cheese, are costing a whole lot more because of the unusual conditions created by reopening. (source)

It is true this article does not mention tools, but it also includes it, because tools are retail commodities. It does not matter if one is discussing drill bits or dirt bikes, because as long as it is a physical object that requires a manufacturing process, and especially if it is overseas manufactured (which most things are), it is going to be affected by supply chain interruptions.

There is still time, and as in all cases, the prices changes will not immediately start. It will b gradual, and most likley follow shipments. Thus items in one shipment will cost more than in future ones, and so forth.

It is truth that supply chain is a part of the problem. However, this is only half at best. The other half, and really the majority, is the debt. It is simple- too much debt in the system has made it that the value of the money itself has declined. I have argued this is going to happen because the US is not special, and it has happened many times before. Thus the more stimulus checks are cashed, the more spending happens, the worse the situation gets.

Eventually it will end, and prices will stabilize, but that will not happen for a while. Hold on, because the ride is about to get interesting.