You are here: Home › Major Decision As NLRB Rules Against Amazon 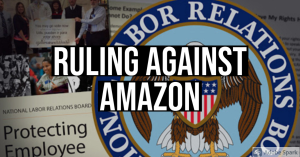 Amazon for many years has acted with impunity when it comes to her workers, treating many of them as simply cogs in a wheel to be disposed of, and with few to no consequences. This has been a long existing scandal in the making, as it was so prolific that it nearly seemed to mirror, based on accounts, conditions from the 19th century that lead to worker rights’ reforms.

However, Business Insider reports that in an interesting case, the National Labor Relations Board (NLRB) has ruled against Amazon after it found Amazon intimated and threatened a co-worker involved in labor organizing.

The NLRB reportedly found that Amazon illegally ‘intimidated and threatened’ a striking worker in New York
The complaint never made it to trial, Vice reported, and an Amazon spokesperson confirmed the settlement to Insider.

Amazon management “intimidated and threatened” a worker who led a walkout in Queens, according to the report.
The report comes in the wake of a historic union push in Amazon’s Bessemer, Alabama warehouse.

The National Labor Relations Board accused Amazon of illegally interrogating and threatening a worker in New York City who was leading a walkout in March 2020 in response to the company’s COVID-19 practices, Vice reported Monday citing internal agency documents.

Jonathan Bailey, a worker at Amazon’s Queens facility, helped organize a walkout to protest working conditions and what workers claimed was a lack of sanitation supplies in the early days of the coronavirus pandemic, according to documents reviewed by Vice.

According to a federal complaint filed by the NLRB, as reported by Vice, Amazon interviewed Bailey for an hour and a half. The contents of the interview constituted intimidation, the complaint said. Bailey also received a write-up for harassment, Vice said.

The case did not go to trial after the parties reached a settlement, an Amazon spokesperson confirmed to Insider.

“While we disagree with allegations made in the case, we are pleased to put this matter behind us,” the spokesperson said. “The health and safety of our employees is our top priority and we are proud to provide inclusive environments, where employees can excel without fear of retaliation, intimidation or harassment.”

The NLRB did not immediately respond to a request for comment.

Bailey and other Amazon workers have been taking incremental steps towards collective action since the end of 2019, Vice reported, and the pandemic made many of their demands more urgent. A group organized under the name Amazonians United NYC led walkouts last year, and circulated a petition with over 5,000 signatures asking for better coronavirus protections, Vice found.

Amazon was found guilty of four of the seven allegations in the NLRB’s review, including telling employees not to engage in collective action “without notifying” workers.

The company is also facing scrutiny at the state level in New York. In February of this year, the New York attorney general Letitia James filed a suit against Amazon for its alleged failure to provide safe working conditions during the pandemic.

This incident is not the first time Amazon has clashed with organized labor. (source)

This could have an interesting effect on the company, considering it is happening as Bezos has left and new leadership is taking over. However, since given the increase in socialism and the overlap between the labor movement and its infiltration or even in some cases being sponsored by socialist groups associated with the political left, one must ask if the charges at Amazon- which were much needed -may be used to herald other political changes

One cannot be sure right now, but it is definitely going to be an important trend to watch for in the future to see if the empowerment of the labor movement may lead to more public support of socialism or other socialist-related policies.