You are here: Home › When Creepy Uncle Joe Is Not Sniffing Kids, He’s Stuffing Them Into ‘Miserable’ Conditions And Barring People From Showing The Photos 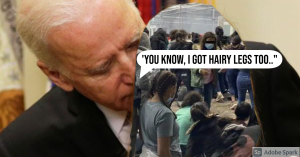 President Biden has been referred to as ‘creepy uncle Joe’ because of his known tendencies to sniff and put his hands on children and adult women in public in very strange ways. There are many photos and videos showing this. Ask yourself, if somebody did this to your child, would you not think it is creepy? 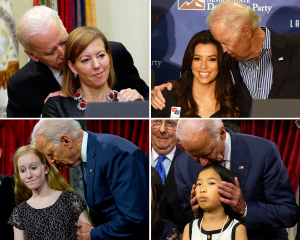 One might say that Biden ‘really’ likes children. However, that might be in question after Biden not only blocked access to journalists to take photos of the US border crisis at various migrant facilities, but now that photos have emerged from the inside, show minors stuffed into detention centers amid deplorable conditions numbering at least 5000.

New photos of a U.S. Customs and Border Protection temporary overflow facility in Donna, Texas reveal severe overcrowding in the makeshift shelter as the Biden administration struggles to handle a growing crisis at the border.

Representative Henry Cuellar (D., Texas) shared a series of photos of the soft-sided facility with Axios, telling the outlet that while each of the eight “pods” there has a 260-person occupancy, one pod held more than 400 unaccompanied male minors as of Sunday.

Cuellar, who recently visited a shelter for children but did not tour that specific facility nor capture the photos himself, called them “terrible conditions for the children.” He called for the children to be moved more quickly into the care of the Department of Health and Human Services.

Border Patrol agents are “doing the best they can under the circumstances” but are “not equipped to care for kids” and “need help from the administration,” he said.

The photos offer a rare look at the deteriorating situation at the border, as the Biden administration has restricted media coverage at migrant housing facilities. CBP had 10,000 migrants in custody as of Saturday. Unaccompanied minors accounted for nearly half of those in custody. Thousands of migrants have been waiting for more than three days in border patrol facilities, according to the report. (source)

In fairness to Trump, ask if he would have received the same treatment that Biden is being handled with if he was in office. Times and people change, but principles do not, and if Trump would be absolutely excoriated for a situation such as this, it is not merely an issue it is a scandal that Biden is not being scrutinized in the same way, considering the last four years.

Another, and perhaps more interesting question, is what is going to become of these children. That is another question that many do not seem to be asking, because illegal or not, they are people, and they are in a vulnerable and susceptible position to abuse.

Prepare For The Third Wave Of COVID
Will Turkey Go To The Slaughterhouse Amid Potential Capital Controls?
Follow