You are here: Home › Murder-Suicides Increase In Ireland 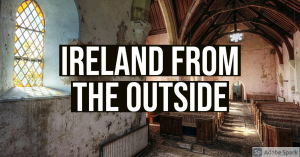 Ireland has suffered from many things in the last two decades. While people lauded the rise of the so-called ‘Celtic Tiger’ in the early 2000s amid an increase in perceived economic prosperity, it came at a series of great costs. Some of these were socioeconomic, such as rising land prices, the loss of family estates, rising taxes, and a resulting prolific emigration from Ireland without the prospect of return to the US, Australia, Canada, and all parts of Albion. However, the biggest loss of Ireland was that of its soul, as the practice of the Catholic Faith and all Christianity (in the case of Ulster) has fallen sharply, with many people outright rejecting religion altogether from the nation with ancient Christian roots. Some have hailed this as a ‘new age’ where “The Church” has a secondary role in society, and a sort of new ‘secularism’ in its place.

There are many genuine and needed criticisms of the state of the Church in Ireland. However, these criticisms should not be taken a reason to reject religion altogether, which is unfortunately the main reason why they are being driven. Problems are natural in life and will happen no matter what one does, but it is how to manage said problems that makes the main difference between success or failure. Yet in spite of this, the anti-clericalism has continued, and while not being helped by members of the Church hierarchy in many ways, it also has not helped Ireland, which not only continues to have economic problems, and not only may see clashed again with Ulster over the issue of separation from the EU by way of Brexit, which is (as Ted pointed out in 2019 in an interview with Riobhca Labhaoise) possibly the most corrupt nation in Europe, has another problem. Irish News now reports that Ireland is seeing a trend of murder-suicides that some fear will increase.

THE weekend’s horrific events in Newtownabbey, in which a man is suspected of murdering his mother and girlfriend before killing himself, has again thrown into focus the disturbing rise in murder-suicides.

In Cork, there have been two such incidents in the past five months alone.

At the end of February, a farmer from the Mitchelstown area is suspected of murdering his two brothers with an axe before taking his own life.

His body was later found in a river, five km from the scene of the murders, following a manhunt.

Reports suggested that the killings came about as a result of a land dispute.

Newspaper reported that the brothers were avid sports fans who never drank and were noted for being hard-working, respectful and very private.

Tadhg O’Sullivan (59) and his sons Mark (26) and Diarmuid (23) were found dead from apparent gunshot wounds.

The alarm was first raised at 7am when one of the sons was shot while he lay in bed.

A woman who was in the house managed to escape and call the emergency services.

A Garda Emergency Response Unit found Mark O’Sullivan with gunshot wounds in his room in the house near Kanturk village.

A short time later the bodies of his father and brother were discovered in a field around half a kilometre away.

It is believed that Mr O’Sullivan may have persuaded his younger son to join him in a pact to kill the eldest son as part of an ongoing argument about a will and future inheritance. (source)

Ireland is not unlike the rest of Europe, which has been suffering the effects of a loss of faith and with that, meaning in the world and society. Secularism and getting rid of the Church has not solved her problems, but merely amplified them, because the purpose of the Faith is not to stop all problems permanently, as Christ will do that when He returns, but to enable the way of salvation for men, and to help them to find contentment in this life in the struggle against sin while helping one to attain eternal peace in the next life. Secularism, which does not attempt to answer the question of the afterlife but puts emphasis on this life, is but a poor attempt to invert the divine order, and in so doing will not succeed in bringing Heaven to Earth, but only making hell on Earth for many.