You are here: Home › Not Surprisingly, The FBI Knew Al-Issa Was A Threat Before The Shooting, And Three More Critical Observations 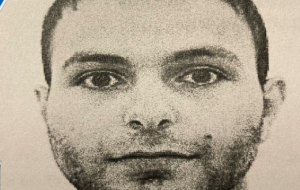 As more information continues to come out about the Colorado shooter at the King Soopers market, there are many questions that naturally are arising about him. Having noted this, I made four observations about the situation for consideration in response to all that has transpired.

1) First, and perhaps the biggest issue, is how as the NY Times reports, the FBI knew about Al-Issa through investigations of other people.

The suspect’s identity was previously known to the F.B.I. because he was linked to another individual under investigation by the bureau, according to law enforcement officials. (source)

Who was this other individual? Why was this individual under investigation? What was the connection of this individual to Al-Issa? This has not been made clear yet, but if one has not noticed for almost two decades of terrorism-related news following 9/11, it is very difficult to maintain that it is merely an accident that consistently, it is reported that the FBI just happens to have knowledge of persons involved in or tied to terrorism, but it only happens that after the individuals commit an action, that this information comes out.

Now in fairness, there are a lot of people the FBI investigates. However, this pattern is very suspicious. It becomes more suspicious when one looks at government programs such as Gladio, which Shoebat.com has reported on for years, where the US government, among many other pursuits, backed and even created Islamic terrorist groups for the purpose of promoting an agenda rooted in the philosophies of National Socialism as a counterbalance to the International Socialism pushed by the USSR as part of a global contest for power between the two blocs. This was but a part of the “Cold War”, and did not end with the Soviet breakup in 1991, but has continued ever just in a modified form. The Chechen wars of the 1990s, the Somalian intervention in 1993, the Bosnian war in 1994, the Soviet incursions in Tajikistan in the late 1990s, and the rise of Islamic terrorism are all either tied to or various manifestations of the effects of the Gladio program.

The extent to which the tentacles of this program have been able to seep into so may areas of public discussion is something that Shoebat.com has directly confronted, considering that it was started by our own Walid Shoebat, who did so not for power or popularity, but to share the Gospel with his own story (on a personal note, I (Andrew) likewise did not come into Islamic Studies for personal reasons, but because of genuine interest in the field). However, as time passed, eventually all of us- Ted, Walid, and I -came to realize, after much effort and thinking, that our work, while never part of any ‘program’ to our knowledge, was being used to advance many other causes, including some that were outright sinister and directly in contradiction to the Gospel, or which were pushing the revival of nationalism and a war machine, such as Gladio.

This is why I emphasize, it is so critical that more information about Al-Issa’s FBI overlap comes out for public scrutiny, for this likely will help understand, for this will likely fill in more gaps in understanding and give a fuller picture of what happened, and be able to place him into a better context with the above history, since there is likely a clear overlap with it.

2) Al-Issa’s family said that he had ‘mental issues’. However, I have yet to find more that has been elaborated on about this.

It is true that ‘mental issues’ can be a common excuse that people blame their problems or the problems of another on. However, there seems to be a notable pattern of mass shooters having some sort of psychological issues. If Al-Issa did have them- such as a noted condition (psychiatric records, etc.) showing that he has been treated for a condition, this could be very helpful in getting a fuller picture of who he is, and perhaps, other connections that may be established.

3) Who was that guy interviewed by local news? See clip below.

Take this clip, and compare it with a livestream of the shooting taken by a person who was there. At 0:39, this guy shows up, appearing to be just standing in the parking lot. See photo also for comparison. 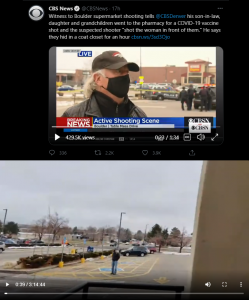 Ask yourself, why on Earth, with DEAD BODIES laying around, was this guy just standing there in the middle of all of it, with no fear, no care, as though he is there for a purpose? Why also did he show almost no expressions of emotion or relief when talking to the camera in the above news clip?

Something does not seem right with him. There seems to be no information as to who he is other than his name is “Steven” in one story- even though the full names of others in the story were identified -and more importantly, what he was doing just standing there outside of his story. And that’s another thing- his story.

Listen to his story again. He claims to be talking about his daughter and his grandchildren, but he interestingly mentions, all in a single 95 second clip, getting COVID vaccines, claims he saw the shooting, and is talking about gun control and ‘legislation’ for it. Also, he claims they ‘ran upstairs’ in the supermarket and were hiding in a coat closet for the last hour (:22).

I used to work for a large grocery store, and I don’t remember there ever being a coat closet. Likewise, if there was something close to it, it was only in a tiny upstairs area that was just for the upper management- not even people who worked in clerical or office type positions there -and it was always locked. If there was a shooter, does one think it is likely that one just ‘ran upstairs’ into such an area, let alone even knowing where to look for it, since most of them are well-hidden? It would be one thing if he said they hid behind a display of product, or under a tray, or even under the deli cabinets, or behind a pallet in the stockroom, but “upstairs” and “in a coat closet”? Call me suspicious, but in my opinion that sounds like a poorly written script for a film than an actual issue.

He also said that his daughter and grandchildren were in the store. Naturally, why is he standing outside the store? He seems to have claimed to have been in contact with them, so why was he not inside the store trying to get to them? Would not anybody do that, instead of loafing around outside? The man who filmed the live ground footage clearly was running around the store area and he could get in, so what excuse does this other guy have?

I don’t want to say he is lying, because there is a lot that is yet to be explained. I will say that his presence, inconsistency of his words with his actions, his being caught curiously on camera at two different times, and the lack of information suggest that there is a lot more to him than meets the eye, and is something that should not be overlooked.

4) Finally, does it not seem very interesting that all of these things are just suddenly happening under Biden?

I want to be clear, I am not taking sides at all. However, it is very interesting that in sixty-three days since his inauguration, the Biden administration passed a massive COVID bill that is going to absolutely eviscerate the value of the dollar and significantly speed up the current economic crisis the US is going through, is seeing an “uncontrollable” flow of refugees into the US that are just being allowed to pass with almost no limit and with photographers barred from reporting on border conditions, with conditions budding in East Africa for a major potential war in Tigray that could become a Bosnia-1994 type NATO operation and may lead to a major refugee crisis, Biden single-handedly managed to publicly and in a major way insult China, Russia, and Turkey on the international stage, has seen Kamala Harris make may of the major decisions while Biden plays Mario Kart with his granddaughter at Camp David, makes major pushes for LGBT ‘equality’ at a federal level, restores funding for abortions, and now has a massive shooting at just of all times while two major anti-gun bills- HRs 9 and 1446 -are waiting in Congress for discussion.

Again, I understand that there are times when nothing happens and times when a lot happens, but does it not seem suspicious that so much is happening so quickly when nothing happened under Trump, and most of the news was about minor statements that Trump may have made and seeing what kinds of “racism” or other silliness could be found in them, while Biden is seeing the country outright burn on his reign, and it is being treated almost as though nothing is wrong or happening outside of just the events, with no sensationalism?

This is bigger than an issue of media sensationalizing. This suggests that something larger is in the world. Remember the Obama years starting in 2013 and 2014, when all kinds of things were happening? This is what appears to be taking place.

If you think that what is happening right now is crazy, get ready, because this is just two months into Biden’s presidency. There are still forty-six more months to go. What will happen is anybody’s guess, but we can say that at a fundamental level, it will be a simple escalation of the current strategy of tension towards a greater global conflict. This conflict, however, unlike the Second World War, will probably not escape the US this time, as just the current social tensions illustrate,

What The Media Is Not Telling You About The Islamic Terrorist Who Murdered Ten Americans In Boulder
Obama-Appointed Federal Judge Restricts Details Of Maxwell-Epstein Case, Says The Details Are Too “Impure” For The Public To Handle
Follow