You are here: Home › Obama-Appointed Federal Judge Restricts Details Of Maxwell-Epstein Case, Says The Details Are Too “Impure” For The Public To Handle 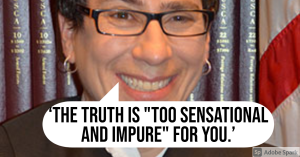 Many things have taken place in the last few months. One of these events, and has received less attention, is the situation of the Epstein-Maxwell case, which has been ongoing. However, a recent update to the case is that a federal judge appointed by Obama restricts access to details of the case, saying that the findings would be too “sensational and impure” for the public.

A federal judge on Thursday agreed with Ghislaine Maxwell’s request to keep certain details in the criminal case against her secret — finding that information would be too “sensational and impure” to reveal to the public.

US District Judge Alison J. Nathan issued a ruling on redactions that Maxwell had asked for regarding transcripts the government filed under seal last month.

“Those portions of the transcript, which were redacted in the civil matter, concern privacy interests and their disclosure would merely serve to cater to a ‘craving for that which is sensational and impure,’” Nathan wrote in the order.

The judge also granted redactions that prosecutors made when filing the transcript. Prosecutors had argued the redactions were necessary to “protect the integrity” of the investigation into Maxwell and to protect the privacy of third parties.

“The interest in protecting the safety and privacy of those individuals outweighs the presumption of access that attaches to those documents,” Nathan wrote.

Nathan also rejected some objections Maxwell had to the prosecutor’s proposed redactions.

“Though the Defendant contends that some of the information contained in the redactions is public, she furnishes no evidence to that effect,” the decision states. (source)

The idea of something being too “impure” to release to the American public is a joke. This is the same US that is possibly the largest exporter of moral filth in history of all types. Whether it is pornography of the worst sorts save child abuse only after 1988 (and the FSC is trying to reverse the laws to permit it again), videos of gore/murder/death/heinous violence, disordered movies that influence disordered passions, perverted or unnatural religious ideas, homosexuality, usury, abortion, if it is evil, one can be the US has pushed it and advocated for it in other countries.

This isn’t about morality, it does not seem, owing to the moral cesspool that America has become. While it cannot be definitively proven, one must suspect the real reason has to do with what may be considered a bigger scandal, which is the Israeli ties to it, for what binds Jeffrey Epstein (confirmed by Alex Acosta in 2008 to be an ‘intelligence agent’) and Ghislane Maxwell (whose father was Robert Hyman Hoch, who later changed his name to Robert Maxwell, and was an Ashkenazic Jew who was be brains behind the creation of the Mossad) is not just religious-tribal ties to Israel, but their ties to Israeli intelligence as well as those in the US and UK. While there are non-Jewish families tied to Epstein, the number of wealthy, famous, or powerful religious Jewish, ethnic Jewish, or political (“zionistic”, for lack of a better term) Jewish interests by way of Israel is tremendous.

Ask oneself, could it be a possible conflict of interest that the judge who presided over this decision- who is also openly Jewish and a sodomite -may represent a conflict of interest, especially when one considers the heavy influence of the Israeli lobby, and how there is a long-known and well documented emphasis (see here and here and here for a very small introduction) on putting ‘Israeli interests first’ and always, summarized by the famous question “Is it good for the Jews/Israel?’.

I don’t say this to encourage any hatred of Jewish people. Rather, it is a simple question of overlapping interests, and applies in any situation. If there is any group that has a documented history of a presence in a certain area and there are a lot of ties that could potentially implicate criminally a member of group X, it is only natural to ask if having a member of group X oversee an investigation into said activities is a possible conflict of interest, especially if that group is considered a minority bloc in society. For example, a man of Norwegian descent residing in Mexico as a part of a Norwegian community, that exerts a lot of influence on the Mexican government, commits a crime. It is a possible conflict of interest that a judge of Norwegian descent, who supports Norwegian interests, preside over his case?

I am not saying there is a “Norwegian lobby” in Mexico, or anything about Norwegians or Mexicans. Rather, I am trying to point out how the issue here is one of principle, not one of race or tribe, and that it is universal. One can think even of the case of Irish-American FBI agent John Connolly who secretly worked with the infamous Irish-American gangster Whitey Bulger for many years, presumably because of a shared Irish background. Now considering that the Irish are one of the largest and most “Americanized” ethnic blocs among the European peoples in the US, if there can be potential ethnic conflicts of interest with them, what is one to say of other ethnic groups that are much smaller in number and proportion and have much stronger lobbies with potentially more serious crimes in question?

The Epstein case is a very serious case, as a lot of people were seriously hurt and possibly murdered as a result of it. It is a massive scandal that like the infamous incident in Belgium involving the serial murderer and pedophile Marc Dutroux, is an American equivalent, and in the name of justice for those injured there must be clarity on this issue. If one was to even suggest that inquiring further into this case, and some already have for a time now, is somehow “anti-semitic”, not only is that a truly incorrect assessment, but stinks of the loxist hatred so prevalent among Jewish and Israeli lobbying efforts in the US that often seems to be a poor attempt to cover for serious crimes possibly committed by members of their bloc and to obscure the natural process of justice out of a perverse sense of religious-ethnic superiority and pride of the same nature that caused many to support the murder of the Chosen One and to laugh at His crucifixion.

Truth is always greater that tribal allegiance, because there is only one human race, and the only ‘chosen people’ are those who seek after God and worship Him in the way that He has ordered, and this is made of all races and tongues.

There does not need to be trite moralizing about the Epstein case. There needs to be justice, and the only way this process can begin is with full disclosure of what happened and who was involved, because truth knows no favorites.