You are here: Home › Here We Go: Evanston, IL Becomes First City In The US To Give Reparations To Blacks 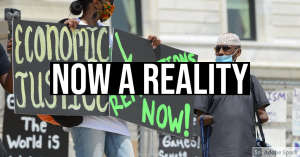 One of the trend patterns to look for during Biden’s term will be those that exacerbate social tensions. It has been scarcely two months, and Biden’s tenure has been marked by a series of events and policy changes greatly exacerbating said tensions. Given the amount of social tension in the US, there are many options that one could choose from by which to incite people to anger.

Reparations is one of these possible choices, since it is a contemporary issue raised by various individuals, many with racialist leaning views, and is highly polarizing. Interestingly, the city of Evanston, IL has become the first government in the US to authorize some form of the practice.

Evanston, Illinois, on Monday became the first U.S. city to make reparations available to its Black residents for past discrimination and the lingering effects of slavery.

The Chicago suburb’s City Council voted 8-1 to distribute $400,000 to eligible black households. Each qualifying household would receive $25,000 for home repairs or down payments on property.

The program is being funded through donations and revenue from a 3% tax on the sale of recreational marijuana. The city has pledged to distribute $10 million over 10 years.

Qualifying residents must either have lived in or been a direct descendant of a Black person who lived in Evanston between 1919 to 1969 and who suffered discrimination in housing because of city ordinances, policies or practices.

Alderman Rue Simmons, who proposed the program that was adopted in 2019, said pro-reparations groups have offered pro-bono legal assistance if the program is challenged in court.

“This is set aside for an injured community that happens to be Black, that was injured by the city of Evanston for anti-Black housing policies,” Simmons said. (source)