You are here: Home › Is China Again Making Poor Attempts To Try And Remilitarize? 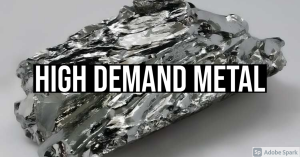 Forbes Magazine recently reported that there has been a curious increase in the purchasing of Molybdenium, a metal, by the Chinese government, in extremely large quantities, asking why she is doing this.

Somewhere in China there is a warehouse stuffed to the ceiling with molybdenum, a tongue-twister metal which most people call moly and which has a number of interesting uses ranging from oil drilling pipe to the steel used in armaments.

Not a widely-traded metal, nor one generally mined on its own, most moly is produced as a by-product of copper mining with the presence of moly in an orebody sometimes the difference between a mine being a profit (or loss) maker.

Last year, according to an analysis of the moly market by Macquarie, an Australian investment bank, the global market was over-supplied by around 45 million pounds thanks to a Covid caused drop in demand.

But this year the moly market is tipped to rebound with a deficit of 16 million pounds developing as demand outstrips supply.

The problem, which foxed the bank, is trying to understand the sudden shift in the market with the only explanation being that Chinese buyers were busy in the second half of last year soaking up the moly surplus and driving the price higher.

“The big driver of the molybdenum price recovery last year was a massive rise in Chinese imports,” Macquarie said.

“In essence, the entire surplus created by the rise in non-Chinese production and the collapse in non-Chinese demand was bought by China transforming the market from one of over-supply to under-supply, leading to the price recovery.”

Macquarie said its detailed analysis of the Chinese market showed that the main first use of the metal was in ferro-molybdenum which is used in the steel industry and accounts for 80% of Chinese consumption. (source)

As I have said before, China may be a large and powerful country, but she cannot hide her intentions. The Anglos are masters of lying. The Russians are masters of bluffing. The Chinese absolutely fail at both, and only look silly or like a child who has been found with his hand in the proverbial cookie jar by a parent- guilty as ever and with no good explanation

Molybdenium is a metal used in metal hardening due to its high melting point. One of its major uses in industry is in gun production, for hardening gun, cannon, and other weapon barrels. If one is using a lot of molybdenium, it likely means that one is making a lot of guns.

In addition, because of its properties, it can also be used in very-high impact metal operations, or areas where metal would be under a lot of stress. For example,, in advanced robotics or other advanced war machinery.

The simple answer is that this story is just, to the observant onlooker, and obvious indication that the Chinese are working on some sort of militaristic plan. In the Wikipedia entry on molybdenium,

During World War I, demand for molybdenum spiked; it was used both in armor plating and as a substitute for tungsten in high speed steels. Some British tanks were protected by 75 mm (3 in) manganese steel plating, but this proved to be ineffective. The manganese steel plates were replaced with much lighter 25 mm (1.0 in) molybdenum steel plates allowing for higher speed, greater maneuverability, and better protection.[13] The Germans also used molybdenum-doped steel for heavy artillery, like in the super-heavy howitzer Big Bertha,[39] because traditional steel melts at the temperatures produced by the propellant of the one ton shell.[40] After the war, demand plummeted until metallurgical advances allowed extensive development of peacetime applications. In World War II, molybdenum again saw strategic importance as a substitute for tungsten in steel alloys. (source)

However, as usual, the Chinese approach raises eyebrows.

Ironically, China is the largest molybdenium producer in the world. However, the second largest is the US (Utah and Colorado), and then Chile (Peru comes in fourth). Russia produces molybdenium as well, but most of that is consumed for internal use, and likewise, because of weapons.

We know that miltiarism is returning, that the nations are getting ready to go back to war. Russia is acutely aware of this as is any nation. However, one does not see Russia trying to buy up as much molybdenium as possible, even though she technically has what one might consider ‘below average’ reserves. India too is militarizing, but one does not see India doing the same thing.

What exactly does China hope to get by , seemingly, cornering the molybdenium market? It is not clear, but what is clear is that China, in addition to her being unable to hide her intentions, also has very erratic thought patterns for ‘success’ that often backfire. One might want to remember in the 20th century alone there were the notorious “Four Pest Campaign” and the “Great Leap Forward”, both of which were promoted and enforced by the government but resulted in China abusing her own agriculture and industrial sectors almost to the point of complete collapse and the starvation of tens of millions of innocent people.

We know that China has been hoarding microchips and interfering with production, as well as hoarding rare-earth minerals used for AI and advanced computing, and both are used in military applications, so it is not unreasonable to think this may be an attempt, in a third way, to ‘hoard’ another metal used in military applications. One cannot be sure of what is going on, but it is not unreasonable to suspect that one might be seeing here, again, a silly attempt by the Chinese government to engage in a militaristic venture that is going to backfire on her miserably.

China can’t corner the molybdenium market because its not like NATO can’t get easy access to it through the US and Chile (parts of Europe, such as Norway, also produce a lot of molybdenium). It’s also mostly used for heavy industry and military applications for guns, which the US is also a master of producing far more efficiently than the Chinese. The same can be said about the Russians, as it was both the US and Russians who flooded the world with cheap weapons and still do. Russia can produce all she needs and more with her own supplies, which are far from the largest deposits of the metal, so why does China needs so much?

It seems the only thing that China will do is succeed in hoarding a bunch of metal that she doesn’t necessarily need, and may be forced to sell it back in the future, at a loss, while prices generally remain stable. Meanwhile, Russia, India, Japan, the US, and the rest of the world will continue to build weapons they will use or will sell to others to use against China.

If China really wanted to hit the US, she would clean up her agriculture industry, enforce strict food safety laws, and become a food exporter, especially for pork. It would be possible, and far more effective than what seems to be happening right now. However, it is likely not going to happen. China will most likely continue down her current trajectory until eventually a greater war happens, at which time, no matter what she says, her concern will be for her survival, because she has no practical allies and is not trusted by her neighbors.

Income Rises The Most Since 1930…Due To Stimulus Checks
While India Prepares To Genocide Christians, The US And EU Selectively Focus On China
Follow