You are here: Home › Nike And Famous Rapper Releases “Satan Shoes” With Human Blood In Them, Only 666 Pairs Made 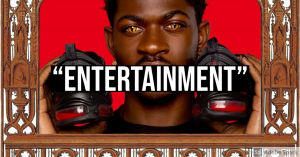 Rapper Montero Hall, known publicly as Lil Nas X, skyrocketed to fame in 2029 with his song “Old Town Road” and has remained in the public attention since then. The rapper, who is an open homosexual and has made videos with blatantly occult themes, now is releasing a limited line of ‘satan shoes’, which claim to have human blood in them and are limited to 666 pairs.

Lil Nas X is reportedly all set to release a pair of exclusive “Satan-themed shoes,” and fans can’t seem to quite wrap their heads around this peculiar development.

Just a day after his Montero “Call Me By Your Name” music video took the internet by storm, Montero Lamar Hill, aka Lil Nas X, found himself on the Twitter trending page yet again, after his latest collaboration with retail start-up MSCHF surfaced online:

A limited edition collab, the Nike-style shoes have been modeled on the lines of the popular Air Max ‘ 97 and are priced at a steep $1,018.

If the association with Satan wasn’t already established enough, what’s interesting to note is that there are reportedly 666 pairs that have been manufactured, with each pair bearing a message from Luke 10: 18 of The Bible which reads:

However, the most sinister reveal lies in the soles of the pair, which are reportedly filled with 66cc of red ink and “one drop of human blood”.

In light of this unconventional collaboration, Twitter was soon abuzz with a slew of reactions. (source)

One can see the website for the shoe release here. It’s openly satanic, and there is no hiding what he is saying. The number ‘666’ on the shoe, the black color, the giant bronze pentagram on the front, the clear red liquid in the shoe bottom, make it very clear that nothing good is associated with these shoes. Likewise, the newest video from this rapper, released at the same time as his shoes (which one can look up on his own) shows the rapper in a variety of sodomitic and demonic scenes until at the end, the rapper dies and slides down a stripper pole into hell where she twerks on and simulates being sodomized by the devil before killing him and taking his place.

However, what one should be concerned about is not merely the satanic imagery. In fact, that might be considered at best a secondary concern. Yet what could be worse that the obvious?

What is worse is that Nike is the one who manufactured these shoes.

The rapper did not make these shoes. It is doubtful he would know the first thing to do. He certainly supports the concept, and is clearly one who supports evil things, but he ultimately is just a useful food, a willing pawn, one who cares more about power and influence than about truth or moral right. What is more disturbing are the actions of Nike, because the corporation is the one- and not just “the company”, but the specific individuals in R&D, marketing, customer service, and leadership -who supported, created, engineered, marketed, and are profiting from the sale of these shoes.

The real blame is more with Nike. Nike did not have to market these shoes. Nobody forced them to do this. This is an action made by their free choice. It is also unlikely they are making much money from these shoes anyways, but rather are profiting off of promoting satanism. This is the real commodity, not the shoes being marketed to people.

No amount of ‘activism’ is likely to stop these people at this point, because the reason that Nike is able to market such shoes is because, clearly, they believe they have enough popular support to be able to sell these shoes without too much open backlash that threatens their bottom line.

Companies and even government do not care about the backlash, because it has no real effect on their ability to do business, for that is the only kind that they care about.

The country is changing. This isn’t about rap, or any one particular kind of music, but that open demon worship is now being accepted in society, and the marketing of this stuff is the proof of it.

Likewise, ask yourself, what has the ‘conservative’ movement done to stop this? The conservative movement has not conserved anything, except for putting a temporary hold on the status quo.

What one is looking at here is a view of the future with these shoes.

It gives me no joy to say that the Christians have lost the culture wars, because the consequences are going to be serious. Christianity is no longer a ‘profitable’ thing, but rather, anti-Christian causes have become popular, and even arguably profitable to promote. This is just part of the result here, and it is not going to get better, for this is just the obvious. It is often the less obvious things- such as the public embrace and defining of the culture by the sins which cry out for divine vengeance, and punishing those who stand against them -that are more serious, as their end result is thing such as the above.

One can only imagine.