You are here: Home › Here It Goes- Watch The Fighting The US Church Intensify 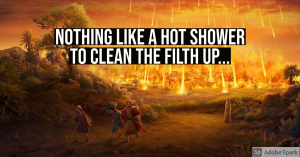 There has been a silent war waged in churches all across the US, with the Catholic Church seeing the hardest front, and that is the power of the LGBT. Shoebat.com has discussed this often, but it is an extremely serious matter, considering that the practices of sodom and Christianity cannot fundamentally co-exist no matter what one says because of the intrinsic philosophical differences between the two. One must yield and the other prevail, and right now, Christianity is yielding as sodom is prevailing.

There has been a lot of advancement by sodom over the last three decades, and the march may take another turn as now priests in the Church are openly allying themselves with sodom.

Father Greiten “came out” to his congregation in this Milwaukee suburb about three years ago, at age 51, when he announced, “I am a gay priest, and a celibate priest.” This moment came after a lifetime of struggle, serving a church that teaches that “acting on” homosexual feelings is a sin.

Father Greiten said, “The unwritten comment is, ‘Don’t talk about it. We know you’re there, but be silent.'”

“Father Frederick,” as we’ll call him, feared losing his salary, healthcare, church housing, pension, and the authority to minister. During his interview, “Sunday Morning” hid his identity. “I’m not courageous enough yet,” he said.

Doane asked, “What does it say that you need to do this interview in shadow?”

“It says that it’s not cool to be gay if you’re a priest. And if you are gay and a priest both at the same time, you’ve gotta hide one or the other.”

He likened that secrecy to the “double-life” of spies.

When asked if he has remained celibate as a priest,” Father Frederick replied, “No, I did not. I experimented. I struggled. There were liaisons, there were relationships. And there was love several times.”

Love and sexual intimacy with another man? “Yes.”

With other priests? “Once or twice.”

He said his seminary where he trained to be a priest was a “warehouse” of young men struggling with their sexuality. They were encouraged from the top, and the beginning, to keep quiet.

Doane asked, “What’s the effect of this culture of silence on the church?”

“It is a slow-moving cancer,” Father Frederick said.

While Pope Francis famously responded “Who am I to judge” when asked about gay priests during a papal press conference, he has also said that anyone with “deep seated” homosexual tendencies shouldn’t be a priest. “Their place is not in ministry or in consecrated life,” he said.

“One of the things I lament is, if there were a case of, say, bullying in a parish or in a school, it would be wonderful for the gay priest to get up and say, ‘Look, I was bullied as a boy,'” Father Martin said. “So, there are these life experiences that I think people are missing in the church.”

Doane asked. “How many gay priests do you think there are?”

“It is a large, silent community, a vast silent majority,” said Frédéric Martel, a French author who spent four years researching his book, “In the Closet of the Vatican,” about the gay underworld there.

He said he interviewed hundreds of priests, even cardinals: “It’s ‘Fifty Shades of Gay.’ I mean, a lot of different kind of gay.”

He suggests the largest group of men in the Vatican may be gay, but do not practice, and can actually be the most homophobic – and in interviews discovered a real range of sexual identities. “Each of them, each of them is totally singular in his little closet,” Martel said.

Francesco Mangiacapra is a sex worker with a law degree who found one priest client led to another, and another. When Doane asked how many priests he had slept with, Mangiacapra replied, “I think about 100. We have in Italy many, many thousands of priests, so 100 is not so much.”

Over roughly five years, Mangiacapra compiled a 1,200-page “dossier” of personal profiles, graphic photos and text-message exchanges with roughly 50 of the priests who were his clients. He submitted it to his local archdiocese of Naples – he says – as a political act.

“This demonstrates that there’s a flaw in the system – a system which tolerates certain behavior but makes it so these behaviors are hidden,” he said.

Mangiacapra admitted the dossier had scared off some priest-clients, but not all, adding: “The libido is higher than the fear.” (source)

I remember years ago that I was told from a reliably source that one diocese in what many might consider to be a highly ‘conservative’ area of the US had “low” levels of sodomite priests in it. The number this person gave was 50%. Another person in one of the more notorious dioceses said that 75% in his locale were sodomites, and that it was so bad he would only trust foreign priests and never a local one.

There has been a decades-long problem growing over this issue, that while not historically unique since it has happened before, has reached historically unprecedented heights.

The problem could have been solved before. It was not. It was allowed to metastize, and now it is at dangerous levels, and is going to be highly destructive to the Church in the US. The biggest blessing that can come out of this is that the problem is open. There is no hiding it. It is very obvious, and it will be for all to see.

What may come from this? There are a number of ideas, but if things continue, the Church could be forced, like in China, to ‘cleave’ into a new Protestantism, with some supporting sodom and others opposing sodom among possible outcomes. No matter what the actual process is, the end goal seems to be to make a division between the Catholic Faith and heresy (accepting the ways of sodom) that will be used to suppress the former using “lgbt rights” at the reason. If this happens to the Church, then it is a likely death blow for all other churches, since they will be forced to do the same, thus forcing them to choose heresy or be persecuted unto their destruction.

Something about US history is that since her inception, the US is known for committing genocide. She does not like to talk about this, but the US will exterminate peoples or ideas she believes she cannot force into submission. Hence there is a legitimate concern that those in power in government will force policies that, eventually, will lead to the legalized persecution and possibly annihilation of the Church and Christianity as a whole. This does not mean the “end of the Catholic Church”, but rather in the US, a great reduction, and a lot of likely persecution of Christianity as a whole.

This is not just a problem in the US. Christians around the world, regardless of denominations, are becoming regarded as or relegated to a hated group more before than ever. Contrary to what some Protestant groups have and say about a massive ‘moved of God taking, place, there is the opposite- many of the churches are dying their natural death on account of heresy that began centuries ago. It was inevitably that such a death would come, but the question is when, and after about five centuries, as it often seems to be with heresies, the illness has fully run its course, and now is finally disappearing, leaving behind a spiritual vacuum that will need to be filled. This is going to be the real challenge for the future, as the Western world and the whole world is going into dark times and warns of the famed words spoken by Cardinal George,

If there is something good that can be said about this, the cleaning of the clerical ranks is long overdue. Unfortunately, it appears that it is going to come not because of man’s actions, but his refusal and God forcing action to remedy the situation, and likely at a severe cost to all.

Report: Religious Attendance In US Drops Below 50% For First Time
The Millennial Curse Awakens
Follow