You are here: Home › Observations On The Current “Satan Shoes” Controversy 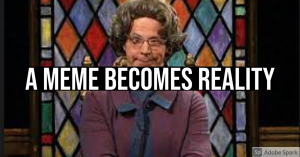 Right now, the Christian world is very upset about rapper Lil Nas X’s “satan shoes”, which a few days ago here at Shoebat.com I wrote about. Apparently, reports say that the shoes sold out in a minute of their offering from the website.

With this happening, now American ‘Christian leaders” are speaking about it. However, I have another question- should we really be surprised that such a product could be sold today, and is it really worth the attention being given to them?

I want to be clear that I am not saying to submit to the occult, or to be ignorant of its rise. However, I am saying that this has been going on for a while. It’s like living in a house where a man keeps adopting cats- random cats, stray cats, cats people don’t want, and so on -and then one day he realizes the cats have been defecating on his rug and he is mad about it. Seriously, is the problem the cats, or the failure to realize and be able to sufficiently react to the fact that the cats have been piling up to unreasonable levels and this is just the consequence of it?

The Christian Post wrote about five self-professed Christian public figures, and their reactions to the Satan shoes. One can read the whole article here, and it is an interesting read, not for the obvious, but because perhaps the outrage is at the wrong thing, for instead of being mad at the shoes, one may want to be mad at the conditions created to allow the existence of such shoes to come into being.

This is a dangerous marketing endeavor if you ask me. Rapper Lil Nas X is producing 666 pairs of Nike shoes they’re calling “Satan Shoes.” They even go so far as to put a drop of human blood in the soles. The shoes are part of promoting a new music video in which this rapper descends down a stripper pole and gives Satan a lap dance. The morals in this country have fallen so fast, and many times the entertainment industry is leading the way.

It is good he is concerned about this. However, where was Graham for the last four years while Trump was embarrassing the Evangelical world by them accepting his life of sin with no condemnation? This is the man who prior to becoming president was praised for his love and expressions of pride, greed, wrath, envy, lust, gluttony, and sloth, (the seven deadly sins), and yet because he was a candidate with the “right side” in politics, he got the blessing of the Evangelical lobby while they ignored his flaws completely, even allowing it to be suggested that Trump was a sort of new King Cyrus.

It is not good what Lil Nas X is doing, but trolling or being honestly and evil person, it is clear what message he is sending. The same cannot be said about the leaders of ‘evangelical America’ (and many other groups too who sided with Trump but did not give a balanced view on him, which includes many in the Church as well as people of other religions).

In a statement sent to The Christian Post, Bob Reccord, founder and chairman of Total Life Impact Ministries, Inc. and former head of the Southern Baptist Convention’s North American Mission Board, said that “most all of our Founding Fathers are turning over in their graves about now.”

“And I convinced that thousands upon thousands who have fought to protect the liberties of this nation never had an inkling of an idea that those freedoms could/would lead to this,” Reccord added.

He makes good points. But what about how the very concept of “liberty” and the Constitution may in fact be the basis of many of the problems today? I do not wish to say that the US has done nothing good, but the philosophical basis on which the US was founded was doomed to fail because it was based on a false conception of the relationship between religion and government, and it was only inevitable that religion would be replaced by the elevation of the state in time unless converted away? It is never heard at all, and if one questions the Constitution, one might as well question the Bible for many of these people, yet its philosophy always inclined to anti-Christian ends.

South Dakota Governor Kristi Noem had harsh words about them.

South Dakota Gov. Kristi Noem tweeted on Sunday that children today “are being told that this kind of product is, not only okay, it’s ‘exclusive.'”

“But do you know what’s more exclusive? Their God-given eternal soul,” Noem wrote. “We are in a fight for the soul of our nation. We need to fight hard. And we need to fight smart. We have to win.”

Noem’s response drew a response of Lil Nas X, expressing concern that a state governor is tweeting about shoes.

Meanwhile, Noem has been criticized for attacking sodom but balking on a bill that would address the intrusion of genital-mutilating men into women’s sports.

She will talk about sodom and Christianity and ‘my faith’ but refuse to put her words to action? Lil Nas X is right about her in his tweet. At least Lil Nas X is honest about his evils, while in typical political right fashion, there is a lot of talk against it but when it comes time to act, it turns into supporting but in a less intense way what the left supports, aka ‘Democrat lite’.

Candace Owens had the best response, in my personal opinion.

We are promoting Satan shoes to wear on our feet.

We’ve got Cardi B named as woman of the year.

How stupid can we be?

Call it incendiary, but it’s also true what she points out, regardless of what one thinks about her politics or who pays her to say what she does.

Another ‘Christian apologist’ gave a not surprisingly weak statement

In a statement to The Christian Post, conservative author and evangelist Alex McFarland said that using Satan as a marketing tool is “disconcerting.”

“Believers and non-believers alike have questions about Satan and the demonic,” he said.

“Some youth seem especially prone to curiosity about the dark side. There is no shortage of references to Satan in pop culture to satisfy public fascination, but it is important that our opinions on such be Biblically informed.”

People have been using the image of satan as a tool too incite Christians for decades. Again, this is not to say it is good or to support it, but there is, most likely owing to the Calvinistic basis of American society, a silliness about the nature of evil- a very serious thing -that leads people into unnecessary panic about the wrong things. This was famously captured by Dana Carvey’s ‘church lady’ character on SN.

I’m not saying evil is not serious. It is, and it needs to be treated with the serious nature it is. But just as with the arguable ‘cartoonization’ of Jesus, from God Almighty and the Savior of men who suffered horrendously and died for them to a person who is like a friend in high school or rich uncle that throws money at you, a similar phenomenon has happened with the devil, where the epitome of rebellion and the pursuit of absolute power to try and overthrow its Creator and seeks the misery of all created things has become a cartoon-like figure running around with silly horns and a red tail looking to say naughty things to people is almost equally bad, as it removes the serious nature of what evil is and makes it into a comedy sketch that people laugh at forget what it is.

Perhaps the problem is not with the devil, but notably to do with reducing Christ to an icon of national pride and abusing His Holy Image to fit cultural or political fights so much that men have unintentionally erected themselves in His place and put Him to the side.

Then there was, of course, a “pastor” who gave his views

“These #SatanShoes by #Nike & #LilNasX with 666 and a drop of human blood in the sole is a reason why we Christians must be prayed up ready to battle in the spirit with the Voice of the Holy Spirit,” he contended. “This is evil & heresy and I pray that Christians rise up against this.”

The Trump part is enough said in itself. But add to it more talk about ‘spiritual battle’, and these same people who are willing to go to war over a pair of sneakers are more than willing to overlook the Evangelical embrace of policies that favor genocide against fellow Christians (ask the Iraqi Christians, or those who are left about it), support of national socialism (the US military support of groups such as Azov and others), and ethnoracism in h form of tribal warfare leading to a new occultism (in the form of Kabbalism).

The US does not need more “Pastors”, but probably a lot fewer, and the same for “churches”. It needs conversion, repentance, and seeking God in the way that God has called, not based on some emotional feelings because of a cheap Christian pop song that somebody played on a $50 organ that the music guy picked up at a yard sale because the budget wouldn’t allow it in the ‘church’ since the ‘pastor’ was probably buying a new car to *ahem* ‘drive around’ the new ‘church’ secretary when his wife was out of town (just ask ‘Pastor’ Derrick Jaxn).

The point to be made here is that it is good people are upset at these shoes, but Christians as usual in the US are making themselves look like fools for the media, barking up the wrong tree while ignoring or supporting and being unable to see how their actions are advancing real evils like nationalism, national socialism, eugenics, and kabbalistic occultism, and it being done in the name of nation and religion.

That is what is so sad about it.

What would be interesting to see is if Lil Nas X at some point has his life spiral out of control, then he ‘finds the Lord’ and ‘becomes a Christian’ and ‘stops his homosexuality’. and then ‘starts his own church’ where he makes himself ‘pastor’, and perhaps makes more money than even as a rapper. After all, what could be more American?