You are here: Home › The Millennial Curse Awakens 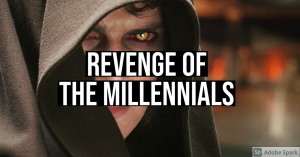 “Boomers are awful”, goes some variant of the complaints about Boomers in society. Many of the complaints about the Boomers are, sadly, also very accurate too. A generation given the world, they actively destroyed it with policies that are bearing their fruits today, for while many seemed to be well-meaning, the unforeseen consequences were realized too late to see clearly and stop them. Now the children of many of them, the Millennials, are starting to take power from them, as this past election was the ‘last horrah’ for the Boomers. With their descendants on the rise in Washington, things may start looking very different.

From social media trolling to workplace culture to climate change policy, millennials from both political parties are moving into power and trying to disrupt the way Washington does business.

“The gerontocracy has been slow to recognize that their world is different from ours,” said 33-year-old freshman Rep. Ritchie Torres, D-N.Y., who is gay and Afro Latino. “I belong to a new generation of leaders who are more progressive and more disruptive, as well as as diverse as everyone else in America.”

Thirty-one members of the House are now millennials, up from just five four years ago, and they’re running the Democratic National Committee and key departments in President Joe Biden’s White House— the oldest president ever sworn into office, who was also one of the youngest people to ever be elected to the Senate.

While they start to show up in Congress, it won’t be long before millennials are taking over the city’s other institutions, from newsrooms to lobbying shops to court rooms.

As millennials age into the ruling class, they’ve been molded by near-constant upheaval — Sept. 11, “endless wars,” the Great Recession, the internet of everything, racial and gender reckonings, global pandemic — and the equally consistent failure of institutions they depend on to save the day.

Yes, Washington’s new rulers have kombucha on tap in their campaign offices and harbor a fondness for millennial pink. They met their spouses on dating apps, ride e-scooters, sport a side part and skinny jeans and have Instagram accounts for their dogs. The millennial senator can’t seem to scrub the internet of his college “Star Wars” videos. And millennials prefer to socialize on Clubhouse, the app, not the clubhouse of a golf course.

But they also have student debt, come from far more diverse backgrounds than their predecessors and, on both sides of the political aisle, are imbued with the imperative to upend a status quo they feel isn’t working anymore.

And some might say politics is, in fact, the perfect field for “entitled narcissists,” as Time magazine once called millennials on its cover.

“My generation works tirelessly, often with low pay and without benefits, and is the first generation in many decades where the American promise of upward mobility for middle- and working-class people is gravely jeopardized,” Ossoff told NBC News. “That’s why there’s such political urgency in my generation that we do things differently — that business as usual risks the American dream for my generation and for the next generation.” (source)

The entire article from NBC is worth reading, but there are a few points to focus on.

First, is that Millennials are very angry. Many of them are severely in debt, encouraged by their parents and families and peers, and since a large part of that is in the form of student loans, it is practically non-dischargeable in court. With fewer job prospects, lower salaries, worsening working conditions, and a lot of anger, they mirror the peasant class in many ways Russia before the takeover by the Bolsheviks in 1917. This is not to say that “communism” is inevitable, but rather to see that the conditions for a revolution, no matter what the nation, have been set up and could happen.

Second is that Millennials are almost all sodomites. Now by this I do not mean that they all want to do the actions of sodomites, but rather that official studies show 75% to 80% of people under 40 support sodomite marriage, and the numbers extrapolated for population percent of sodomite behavior at the same rates makes it about 93% of support for the act. Thus most Millennials or Zoomers may not call themselves sodomites, but a historically larger than average and ever before in the US (especially Zoomers) are bisexual, and they support the practices. To put a Biblical take on it, most would follow not in the example of Lot, but the example of Lot’s wife.

Third is that Millennials are anti-religion. It has been noted that only 36% of Millennials and Zoomers attend any sort of religious institution, and for Christians, it would not be unreasonable to say that 30% or less attend a Church of any kind. The effect this have will be profound, since to be a Christian will be divorced from support of the nation, and many not only further more decline, but may have the result of encouraging the persecution of Christians, especially the Catholic Church, but through legalized means.

Fourth is that Millennials will not stop the current policies. Millennials have largely shown themsevlves, in spite of notable deviations, to follow well the current party lines, but in a more secular, tribalistic context. Such is indicated by the rise of extreme leftist and extreme rightist thought schools again, but with less diction and restraint than the Boomers.

When one takes these views in consideration with the economic, political, social, and national climate, the situation is not good. In fact, the tensions may make the Millennials and Zoomers worse than the Boomers in that what the Boomers started the Millennials and Zoomers will finish. It is interesting therefore that the next generation after Zoomers is called “Generation Alpha”, for Alpha is both the first letter of the alphabet and implies a sort of “new beginning”, but beginning after what? Something that is yet to come?

That last part is for one to imagine. But at the current time, the focus is on the ascending generation to power, and they seem to have made their perspectives clear. The question is, what will society look like after their time in power has passed?