You are here: Home › Even People On The Right Are Asking What Trump Did With The Monies He Received 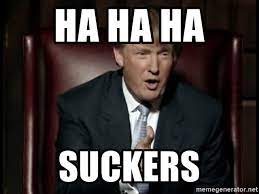 There are a lot of people who, when Trump was in office, absolutely defended his actions regardless of what they were. However, there were a lot of questions, especially about Trump’s heavy personal debts, and given that situation, how he was going to be able to pay for them.

I pointed out before that there was a concerning trend of donations for Trump’s “election defense fund” and other such things potentially being used to pay his debts, that the money would legally be redirected to pay for his personal bills. Now, even conservative publications such as American Greatness are asking this question, wondering where those monies have gone.

What exactly is Trump’s Save America PAC? “The money in the Save America PAC, unlike money contributed to a standard campaign committee, can be used to benefit Trump in innumerable ways,” explained the Washington Post’s Philip Bump. “Memberships to golf clubs. Travel. Rallies. Even payments directly to Trump himself, as long as he declares it income.”

Save America has been at odds with its stated purpose from the outset, as money donated to the PAC could not “be used to support Mr. Trump’s own campaign or the cost of litigation arising from his campaign,” according to Brendan Fischer. Fischer is an expert in campaign finance and government ethics at the Campaign Legal Center. “In the weeks following the November 3 election, President Trump asked donors to give to his ‘election defense fund,’ but in reality, the money raised flowed to Trump’s leadership PAC, which never paid for any post-election litigation and legally could not even do so,” Fischer told American Greatness.

“One of the only restrictions on Trump’s leadership PAC is that it cannot be used to support Trump’s own campaign, including the costs of litigation arising out of his campaign,” he added. “In short, Trump raised tens of millions of dollars on a claim that his PAC would do something that it was legally prohibited from doing all along.”

It is difficult to overstate the impropriety of Trump’s leadership PAC fundraising. The $8,000 “Election Defense Fund” threshold meant that those solicitations preyed directly upon working-class constituents, as only wealthier donors could easily clear that figure to actually contribute to anything election-related. Indeed, the former president pulled in vast sums of money from crucial small donors—something he appears to be aware of and is willing to use as leverage against the GOP.

The “why,” “how,” and “what” comes into view as a nebulous labyrinth of shell companies, fronts, PACs, and vendors served by an army of cronies. The latest fundraising apparatus appears to be a proposed Trump-branded social media network, which Jason Miller told Fox News will launch “in probably about two or three months.” If the Save America PAC is any indicator, users should think twice before allowing Trump’s team to harvest their data, and always remember to read the fine print. (source)

Here is another question while on the issue to ask- where is Trump helping all of those people who have marched in support of him and at this point have basically destroyed their lives as they are being prosecuted?

The more one looks at the situation, the more one remembers Trump’s history of fraud, the more it seems that the real fraud might be, not surprisingly, Trump himself. It is true that there were a lot of inconsistencies in the Trump election, and that fraud was very likely. But the constant claims of a questionable nature, especially the Raffensperger phone call, do not work to his favor. To that, when does Trump plan to spend the quarter of billion he has raised? What about exposing that “election fraud”?

If one still follows the Trump cult, there is little that I can do. But the fact is that, as I have said before, Trump had the chance of history to do something truly great, and he utterly blew it on his own image and self-promotion. Trump is not the ‘best ‘president’ the country has ever had, but rather the best actor, since that is not only the only area of business he has actually succeeded in, but he acted his presidency as though he was helping the country when he did nothing in reality.

What does it mean to be a ‘conservative’ now, considering that Trump’s promise to ‘rebrand’ the image did nothing, and the Republicans so far are continuing on the same trajectory- right into the grave of history.

Perhaps the Republicans deserve less credit for their intelligence than one might want to give them, assuming the most supportive position to their cause given the circumstances, because while the specter of nationalism could cause a real revival of the party’s platform, at the same time, the current social circumstances may dictate otherwise.

But for those who are serious on the political right, and genuinely care, the party needs a desperate reform at many levels, and one of those levels is to get rid of cancerous people and grifters, and right now, and perhaps in recent history, there is arguably no larger cancer or grifter on that party than Donald Trump.

Man Attacks, Kidnaps, Sodomizes, And Shoots Random 12-Year-Old Boy In The Face In Public
Who’s Really Behind The Funding Of “Ordo Blasfemia” In Poland?
Follow