You are here: Home › Legislation Fails After Noem Veto 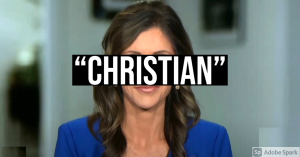 The state of South Dakota has failed to override a bill vetoed by the “Christian” governor Kristi Noem, who said she was against the LGBT but when it came time to put her words into action, sided with the LGBT.

The South Dakota Legislature Monday failed to override Gov. Kristi Noem’s veto of House Bill 1217, a measure that aimed to make it illegal for transgender women and girls to compete in sports designated for women and girls.

First blocking the legislation with what’s known as a style or form recommendation, a tool to allow the partial veto of a bill that’s cleared both the state House and Senate, Noem took issue with the inclusion of collegiate sports in the measure.

But after much debate about whether using that method to block legislation was constitutional, the House resoundingly rejected Noem’s style and form veto Monday morning with 67 members voting against affirming the changes she wanted.

That meant HB 1217 was to come back to the House floor as an outright veto, which the House failed to override with a two-thirds vote. (source)

I mentioned this story in passing yesterday while writing about the ‘satan shoes’ controversy, and I want to repeat and expand on this to make a point I have constantly said, which is that there is no fundamental difference between the Democrat and Republican parties, except the Democrats are full degenerate while the Republicans are ‘degenerate-lite’.

The Democrats do say a lot of evil things. In this case, it is their support of sodom. From a Christian viewpoint- a real one, not one that makes the common equivocation of Christianity to American nationalism -there is no way to support the positions which they hold. To support them is entirely evil, in stands in the way of Christian history as well as pre-christian history all the way back to the dawn of creation. The issue of Sodom is not something that is for debate, and it is only for the bay in modern times because of politics. The issue is so serious that from a Christian perspective, if the issue is not resolved in due time then the United States and the world night receive punishment in the same way that Sodom did.

However, something that can be said about the Democrats practice what they preach. It is true that the Democrats love this evil, as well as many other evils so much that they are willing to put their beliefs into action and advance them. That is how serious they take themselves they do not see opposition to their ideas as something to worry about, because they see a greater future goal and not simple obstacles before them as major setbacks. The Democrat Party has a very large vision of history in the future and sees themselves as a active participant in a new vision of America, a new vision of the world based on their own philosophies and in their own image.

Republicans posit themselves as the opposite for one might say, antidote to the Democrat agenda. This would be fine if it was actually true. The proof of this is in the actions of the Republicans, not in their words, because actions always speak louder than words without exception. Republicans tend to publicly oppose the Democrats but privately or upon receiving power, to assert a more moderate version of the Democrat agenda that does not advance it as much as it would have been advanced if the Democrats were in power, but nevertheless still advances it, and prepares the way for a further advancement once the Democrats inevitably take power, because there are only two parties in the American system, and in a two-party system, one or the other must prevail as there is no genuine third option that people will seriously consider.

This is the madness of the American system. For decades now, people can clearly see this pattern in action. It is not science that requires an advanced degree, or that requires above average intelligence or some sort of insight or perception that would be very difficult to gain without many years of experience. Even a very foolish person look at the current paradigm and see that this is a giant game, that both parties support the same agenda and they play off on how fast to advance the same agenda but never change the actual course. The Democrats like to drive fast, the Republicans like to drive slow, but both take the exact same road, to the exact same place, every single time without exception.

Now one can see the case of this Governor Kristi Noem. She stated very clearly that she was going to oppose certain legislation that would prevent the advancement of the LGBT agenda. She was very public about her statements, and because of this she was able to seduce a large number of Christians to follow her. Indeed, all people should be given a chance to prove themselves this is only right and good. However, one must prove one’s words with action, because without action talk is just talk and does nothing except to make people’s ears feel good about a situation and gives an illusion of doing something when the reality is that nothing at all has been or will be done.

All that she had to do was sign the bill, been able to support her words with her actions. This was not a hard thing to do. When she refused to sign the bill, that action showed where her true allegiance is. She may talk about how much she is a Christian, how much she opposes the LGBT and all about her personal relationship with Jesus, because she does not have to be personally accountable to Him unlike her voting constituents. Now it is true that at the end of our lives, we must render an account of our behavior. However, from the atheistic position of American politics, regardless of the party, she knows where her true support is. Most Americans support the LGBT. Therefore, she will say what she wants to get the support the Christian base but when it comes time to implement real legislation to support her statements, she will side with that group which gives her the most power, and that group is the LGBT, because the Christians are in decline and they are on the ascent.

Stop supporting these politicians. They don’t like you, they don’t care about you, and no matter what the issue is or the situation is, American political behavior is very clear, that the politicians in power will side with whoever pays them, and they will not care all the people think about them is so long as their bank accounts grow and their position is secured for the future. As far as the common man, they do not care what happens to him and never have. They don’t care if you live or die, they don’t care if the entire country is set on fire and burned to the ground, so long as they have gotten all they can and are not there when the place is on fire, preferably so they can blame it on somebody else and continue their grifting, parasitic behaviors in another place.

The sad part is that this is not a few bad people in politics. It is a social problem, because the politicians in society represent the people, and far too many Americans are not just amoral and atheistic in spite of whatever Christian label might be put on them, but many Americans if given the same power would do the exact same things that they accused the politicians of doing. a select few who would oppose this, but they are the distinct and abnormal minority.

Instead of worrying about pointless culture war since the culture war has already been lost and was lost some time ago, Christians in America need to focus on preparing themselves for the future. Catholic Cardinal George, as I have pointed out, noted it very well in a prophetic Vision he had before his death, is that Christianity in America is going to continue to decline, and to be a Christian will have nothing to do with nationalistic pride, but it will make you a hated minority and subject to all kinds of unnecessary abuse and persecutions, beginning with the economic but possibly extending to physical persecution done in a legalized form, so that the nation can claim that there is no abuse happening, and that all of it is legalized, but it will have the same effect as it would have had in other countries where people are just tortured and abused with impunity.

Likewise, a good option now for Christians to consider is to save your money. I don’t say this just for paying one’s own bills, but I speak about tithing and supporting one Church. There is a strong chance that a lot of churches in this might end up seized just like during the revolution of Henry VIII except it would not be just Catholic churches but also Protestant ones. Most likely, it would use the tax system to strip churches of their 501(c)3 designation and in doing so, to open the way for IRS property and asset seizure. This is also not a new warning, was made by people for many years, and many refused to listen. Unfortunately, we are at a point where it is most likely too late to try to stop this, but rather it is the time to prepare for this to happen. I do not want this to happen, but rather, to acknowledge and uncomfortable reality that we will most likely be forced to deal with.

At this point, there is no reason to care what any Governor or politic logician will other figure in government who claims to be a Christian does or does not do. The future of the country has already, most likely been written out by the actions of the people. If God is real, and He certainly is, the US faces a great reckoning for the many sins that she has promoted and continues to promote and does not see any sort of forgiveness from.

Remember the warning of the story of The Ant and the grasshopper. It is late fall in this country, winter is upon us and instead of worrying playing outside or anything, it is time to make sure that one’s provisions are ready for the very hard winter that is about to come.