You are here: Home › Who’s Really Behind The Funding Of “Ordo Blasfemia” In Poland? 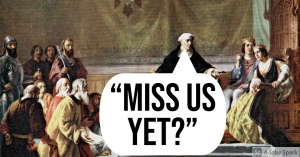 Poland is known for her long Catholic history, but in the past two decades, this has come under a vicious attack. While in most of the last century it was from Communism and the USSR, now a possibly eve worse threat she is facing following the crumbling of the Berlin Wall as rampant secularism and hatred of the Church, in the name of ‘freedom’ is being aggressively pushed on her, mostly from the West.

Poland has historically been divided into two regions- Poland A and Poland B. Poland A is the northern and wester regions, and Poland B is the eastern and southern regions. A has historically been more German-influenced, heathen, and wealthier, and B has been more “Polish”, Catholic, and poorer. This division has roots to ancient times, remembering that the coastal area of northern Poland to Latvia nations remained violently heathen until as last as the 15th century in some parts.

Now it is being reported in Poland that a musician, an guitarist claiming to be ex-Catholic turned a satanist and a player in various blasphemous bands, now wants to get rid of Poland’s anti-blasphemy laws in the name of ‘free speech’.

A Polish court last month ordered Darski to pay a fine for posting a photo of himself stamping on an image of the Virgin Mary.

It was the sixth criminal case against him.

He has previously been taken to court for tearing up a Bible on stage and making crude comments about Poland’s powerful Catholic Church.

“In 1989, we put an end to a totalitarian communist regime. Now, a short time later, we have a new religious nationalist regime.

“I just want to create. Let me create! It’s terrible if an artist needs to question himself or consult a lawyer every time he wants to say something, record something, express himself.”

Prosecutions under article 196 of Poland’s Criminal Code for “offending religious feeling” have gone up in recent years under the government of the populist Law and Justice (PiS) party.

The charge carries a maximum sentence of up to two years in prison, although a fine is more likely.

Following his latest prosecution, Darski set up a crowdfunding website called “Ordo Blasfemia” — a mocking reference to the ultra-conservative legal organisation Ordo Iuris behind many of the prosecutions.

Darski announced the new fund on social media saying he was being pursued “under the banner of Catholic dogma” and said he wanted “to finally beat the bastards once and for all, for all the artists in Poland that have been punished for blasphemy”.

He said the funds “will not only help protect me against my enemies but also support any action to make people understand that we are in grave danger of losing freedom”.

Founded in 1991 when he was just a teen, Nergal’s band Behemoth is well known on the heavy metal scene for the occult, satanic imagery in its highly theatrical performances.

They are regularly taken to task in Polish right-wing media.

The website niezalezna.pl branded one of the band’s albums “disgusting” and said the group had “once again offended the religious feelings of millions of Catholics in Poland”.

Worshipped by fans, Darski says his critics find “a masochistic pleasure” in watching his concerts or visiting his websites and being shocked.

There is much that one can criticize about blasphemy laws. However, one must always look at the situation, context, and result, because no country has ‘absolute’ free speech. Even in the US, while it is permitted, if one is to publicly criticize Israel or Jewish behavior, one may find himself de facto censored. Thus ‘censorship’ and ‘free speech’ are loaded terms, meaning that in almost all cases, it is about what kind of speech to censor.

Here is the case of a satanist- a man who hates the Church -wanting to blaspheme the Church. The current laws in Poland are that not only is blasphemy against the Church protected, but due to her laws, other kinds of criticism such as anti-Jewish speech, is also banned.

What artistic value does stomping on a portrait of the Blessed Virgin have for society? What argument could justify it? It has about as much value as Samuel Roth claimed for his material when this particular Jewish homosexual porn-peddler won the infamous Roth v. United States in 1957 that, in the name of ‘free speech’, abolished the US blasphemy laws and lead to the production of every kind of pornography available for sale, including child pornography (until 1986), and was the same justification for the legalization of pictures of child sexual abuse in cartoons since 2003 by the ‘Ashcroft v. Free Speech Coalition’ case.

It is not a surprise that this singer is from Gdynia, part of the “tri-cities” region in northwestern Poland near the German border that is also a center of heathenry, abortion, human trafficking, and other evils in Poland.

But perhaps the most interesting part of this situation is the website for his ’cause’. One can view it here, but curiously, the entire site is in English.

Ask yourself, this is a Polish man looking to make a change in Poland to Polish law.

Why is the whole site in English?

It is not enough to say that it is because the singer lives in the UK that is the reason he is doing this. After all, even if he is mainly trying to raise money in England for his cause, why would he not have a real Polish version, since it is his own people he is trying to bring change to?

The fact that all of this is English and there is such a curious lack of information in Polish (save for a few outside links on his site) suggests that this is not being supported in Poland, but is being funded by outside sources, from the Western world. This cannot be definitively proven, but it is a serious observation that must not be ignored..

It is yet to be seen who is funding this group, other than the singer. But the fact is that it is unlikely this is just his effort, but rather that he is more of a paid troll acting as the frontman for a larger agenda, that by corruption, others may assert a stronger rule over that nation, and at a very critical time in her history as the world leans towards war once again.

This ‘artist’, if he can be even called that, claims to want ‘co-existence’, but this is not true, for evil demands ‘co-existence’ in order that she can get a footing to eventually throw out the good and erect herself, since fundamentally, it is the pursuit of absolute power that she seeks. There is never to be ‘co-existence’ with any sort of evil, but only its removal.

This is not about art. It is about power, and it demands for itself that which it would never give to it opponent, and therefore from its inception is as dishonest as the source from which it came.