You are here: Home › Major Rabbi Declares He Is Conversing With The Messiah

By Andrew Bieszad on April 2, 2021 in Featured, General 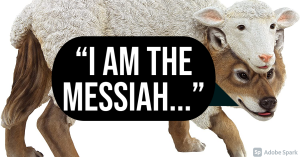 Right now it is Holy Week, the high week of the Christian year, and according to Israel365, a major Haredi rabbi has discussed messages he claims he was sworn to secrecy before not to discuss, but can now about the coming of the messiah.

A Haredi rabbi, privy to secrets concerning the Messiah, was sworn to silence for several decades by hidden righteous men but they have now ordered him for the first time to publicize their messages about current events and the imminent arrival of the Messiah. They tell him that it is literally a matter of life or death.

Rabbi Zissholtz then explained several recent statements made by Rabbi Chaim Kanievsky, one of the most prominent rabbis of this generation, concerning the Messiah.

“I no longer travel outside of Israel. The Messiah is so close that I am afraid that I might miss his arrival. Rabbi Kanievsky said the Messiah is here, in Israel, but he did not give a precise time when he will be revealed. He is here but he does not have all the power he needs to act as the Messiah. All of the signs given in the Talmud, in Jewish tradition, have already appeared.”

“Another Tzaddik said that all the military operations in the past few years will be a mere ‘sprinkling’ compared to what is yet to come. There will be a war with Iran but Israel will not be directly involved.”

Rabbi Zissholtz cited another hidden tzaddik as saying that in this month of Adar we will see “great things.” It should be noted that the Israeli election is in Adar.

“Another tzaddik said that according to the current situation in heaven, there will not be Israeli elections – rather, there will be a war. This will be a reaction to the Deal of the Century. This is the current status however it can be changed in heaven.”

“Everything is dependent on Israel repenting or not.”

At a later point in the interview, Rabbi Zissholtz explained.

“If the elections do take place, voting the upcoming elections is only necessary to prevent sacrilege, but other than that, it’s pointless since it will end like the other elections; no government will come out of it. No one will take the government away from Netanyahu. As Rabbi Kaduri and the Lubavitcher Rebbe both said, Bibi will be the last prime minister before Messiah. This is the end of the rule of the mixed multitude. We will all see this.”

NATURAL DISASTERS BUT MORE TO COME

“Natural disasters are occurring all over the world, including the coronavirus, fires in Australia, some other disaster that was to occur in the atmosphere is occurring now,” Rabbi Zissholtz said. (source)

These messages are interesting, but the reality is that the Messiah has already come. His name is Jesus, and He was murdered. When He comes, it will not be for the first, but a second time, and for justice.

This messiah that this rabbi speaks about cannot be the Messiah. Therefore, assuming he is not lying and that there really has been contact with this entity, it is not the Messiah, but not surprisingly, a demon. There can be no other answer, or else to blasphemous suggest that Christ is not the Messiah, and that He died for no reason, and that the horrendous trial that He was subjected to on today, Good Friday, was just, and that it was better that Barabbas was released than Christ.

Just think about it.

What They Will Never Tell You About The Cult Suicide, Black Magic And Mass Murder During The Time Of Christ
One Of The Faces Of German Neo-Nazism Is A Turkish Vegan Who Considers Jews Parasites
Follow