You are here: Home › If True And In Large Number, Then Saudi Arabia May Need To Prepare To Be Kebobed By Her Ottoman Neighbor 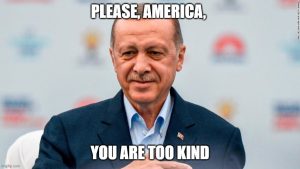 Saudi Arabia and the US have a very long alliance, going back to the formation of the Arab-American Oil Company in the early 20th century. The US has provided for the meteoric rise of the House of Saud, the development of the nation, and the life of luxury enjoyed by the family as well as their protection in exchange for cheap, easily extractable oil. However, things may be changing as according to a report, the US may be moving more troops out of Saudi Arabia.

The White House has reportedly ordered some US military forces and equipment out of Saudi Arabia in a move that may underscore the Biden administration’s desire to focus its international resources away from the Middle East.

Financial daily The Wall Street Journal reported on Thursday that the US has “removed at least three Patriot anti-missile batteries from the Gulf region, including one from Prince Sultan Air Base in Saudi Arabia, that had been put in place in recent years to help protect American forces.”

“Some capabilities, including an aircraft carrier and surveillance systems, are being diverted from the Middle East to answer military needs elsewhere around the globe,” the newspaper continued, adding that “other reductions are under consideration.”

In February, the Pentagon released a statement reaffirming its “strategic defense partnership” with Riyadh in the face of increased attacks by Yemeni rebels.

But since US President Joe Biden’s inauguration, tensions have flared between Washinton and the Islamic Kingdom, specifically over the killing of Saudi journalist Jamal Khashoggi.

In early March, Biden ordered the declassification of an intelligence report that found that Saudi Prince Mohammed Bin Salman (MBS) ordered the 2018 killing of Khashoggi, a US-based contributor to The Washington Post who was lured into the Saudi consulate in Istanbul.

The report found that seven of the 15 members of the hit squad that flew to Istanbul came from the Rapid Intelligence Force, which it said “exists to defend the crown prince” and “answers only to him.”

The Treasury Department imposed sanctions on the force — meaning any US transactions with it will be a crime — but the administration stopped short of personally targeting the powerful crown prince.

While the administration failed to impose a punishment on MBS for the gruesome killing, citing Saudi Arabia’s invaluable contribution to regional security interests, US lawmakers remain outraged over the prince’s actions, including many Democrats. (source)

While one associates the kebob with Middle Eastern cuisine, and rightly so, one might argue it is technically Central Asian in origin, shared by Japhetic and mixed-Japhetic cultures that resided in that part of the world and some of which in repeating waves went north and west to Europe or south and west to the Middle East. In that sense, one might say the kebob or in Turkish, “kebap” is truly a “Turkish” food in its origins. As Ted, Walid, and I have noted many times, Saudi Arabia’s survival depends on outside protection, and if it were to be removed, the “goose” of Saudi Arabia would be rapidly devoured by the Turkish “wolf” in her neo-Ottoman expansionism.

It will be interesting to see if this report is just one incident, or perhaps foretells a larger trend of US troop removal from the Middle East, with willing knowledge, of allowing Turkey to ‘fill the vacuum’ left by the Americans. If the US truly begins a significant military withdrawal from Saudi Arabia, that is bad news for the House of Saud, as Turkey, given the first chance, will gladly make a kebob out of Saudi Arabia, as she has the military power, manpower, skill, and national motivation to do such.