You are here: Home › US Military Builds Up Air Force Presence In Alaska 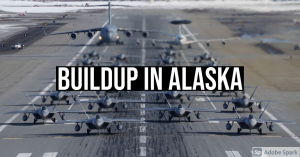 A few days ago, I wrote a long piece about Russian military activity in the Arctic, for while many people think of “global warming” as a natural phenomenon, there is not only evidence to suggests that it is real, but that it is actively being encouraged for geopolitical reasons by the Russians in order to prepare for a third global conflict in which one of the main spheres of action will likely be (in addition to the Himalayas and Volga Basin) will be the North Pole. Russia wants to revive her Soviet past and has made clear of these intentions for decades now, and given her current state of affairs, she has admitted to and is working on creating a Russian-dominated “sea highway” from Murmansk to Anadyr, giving her passage around Europe, control over the North Pole, possible attempts at seizing Svalbard and even possibly Greenland in the future, and year round sea access to the Far East through the Bering Strait.

The US is not going to accept this, not surprisingly, and so it is equally not a surprise that the Air Force Times reports a large buildup of the Air Force in Alaska.

Ten thousand troops will descend on the High North this spring to practice how the U.S. military might react if simmering tensions in the Arctic reach a boiling point.

The Air Force’s team in the Pacific will lead the Army, Navy, and Marine Corps in the biennial, 12-day Northern Edge exercise beginning May 3.

“Northern Edge allows [U.S. Indo-Pacific Command’s] joint force to … put all the pieces of the puzzle together, the big picture, and allow our younger generations within the armed forces to experience what future conflict could feel like, and the complexities associated with it,” Air Force Lt. Col. Michael Boyer, the lead planner for Northern Edge, told reporters Wednesday.

This year’s iteration of Northern Edge comes as Russian military aircraft in 2020 flew near Alaskan airspace “more … than we’ve seen in any year since the end of the Cold War,” according to U.S. Northern Command boss Gen. Glen VanHerck.

A Pacific Air Forces spokesperson declined to provide the scenario those servicemembers will face, saying it needs to remain under wraps to “preserve a degree of realism for the participants.”

“We are looking at what modern warfare could be in the future, and that includes scenarios like [Russian incursion into American airspace,” Boyer said. “Obviously, we see a lot of interest and value in our nation’s interest in the Arctic and we want to make sure that those are protected and preserved in an appropriate manner.”

The military has not yet announced many of the units that will take part, but said it could involve up to 300 or so aircraft. Boyer hinted that the new KC-46 tanker plane will participate, and that the event will involve challenges like setting up a command-and-control site on the fly in a school, using Marine Corps landing crafts to deliver resources to people on land, and limited communications between services. (source)

It is of note that the same region is home to three sizeable Russian military camps, but across from the Bering Strait- the Anadyr base, Cape Schmidt, and the Wrangel Islands. It is arguably the third most heavily militarized area in the Russia Arctic after the Murmansk/Karelia region, and the Bulunsky District/Anzhu Islands regions north of Sakha/Yakutia.

Given all of the militarization taking place, and how Russia is at the very least going to be forced to fight in two theaters (Europe and Asia) as well as multiple locales (Karelia, Chukotka, and Volga regions), it will be interesting to see how her military planners attempt to ‘check’ the growth of the US and NATO movements.