You are here: Home › Bank Of America Advises To Buy ‘Real Assets’ As Inflation Hedge 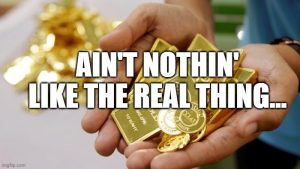 Inflation is going to explode, for between money printing, a depreciating dollar, and other factors that have caused economic instability, the price of goods and services are going to increase as the value of the dollar decreases. In response, Business Insider has curiously noted that Bank of America is suggesting for people to buy ‘real assets’ as an inflation hedge.

Since the election of President Joe Biden, inflation and its potential comeback have been hot economic topics. Pumping trillions of dollars into the economy could overheat it, critics say, while others see few signs of runaway inflation, either now or in the near future.

Freak events in early 2021 like the Texas freeze and the giant ship stuck in the Suez Canal haven’t clarified the issue, as they contributed to inflationary shocks that may be “transitory” or may not be.

Bank of America’s chief investment strategist, Michael Hartnett, has seen enough to declare a “secular turning point” on inflation and anticipates that stock market returns will be lackluster over the next decade. Stock investors who’ve seen a roughly 10% annual return from recent decades should expect that gain to go down to 3% to 5% over the course of the 2020s, he added.

But he has a recommendation: Real assets are a more overlooked part of the market that may offer investors protection against inflation while diversifying their portfolios.

In a recent note Hartnett said that real estate, commodities, and even collectibles like wine, art, diamonds, and cars could outperform in the next decade. Investors don’t need to own the physical assets, Hartnett added, but instead can own REITs, and specialized funds that focus on these assets.

Real assets are positively correlated with inflation and interest rates, unlike financial assets like stocks and bonds, Hartnett said. During “the Great Inflation” of the 1970s, real estate and commodities outperformed large cap stocks and government bonds. He added that in eras where bonds and stocks struggle, real assets have provided superior risk-adjusted returns.

Over the past 5 and 10 years as inflation fell to the lowest average levels since the 1960s, real assets have seen lower returns and lower volatility, according to BofA data. Now, the price of real assets relative to financial assets are at the lowest point since 1925, making them attractive investments according to Hartnett.

Real assets are also underowned, with only 5.5% of the total market cap of all ETFs exposed to real assets.
Additionally, since 1926, collectibles (8.1%) and commodities (6.3%) have offered higher returns than government bonds (6.0%) and cash (3.4%), albeit with higher volatility. (source)

If you have been reading my articles, I have made these points for years now. You can look them up in the Shoebat archives, but the point is that the US dollar is being devalued intentionally for political reasons, and there never, ever was any intention of paying off our debts. It will be to create a politically exploitable default, and use the chaos to advance militarism. That said, it is likely going to come at the serious financial loss of millions of people.

Part of the emphasis I have placed on this is because, just like with politics, there is no good answer, and the one who can do the most good is the one who is able to help himself the best, and way to help oneself the best is to avoid being unnecessarily injured in problems that one did not create and one cannot solve because no matter waht the intentions are, the problems are being supported by both sides. In other words, it is to avoid becoming an exploitable pawn for another’s gain at one’s own loss.

There is no good financial answer to what is coming. The smart answer is to avoid the system, but since one cannot avoid it because of the size and spread, it is to insulate oneself as best as possible from the inevitable. While I cannot and do not pretend to give financial advice, the observations of Bank of America here are wise and historically consistent with other periods of financial chaos, and that is to find something that one can use to preserve and communicate wealth until the problems subside, as they always do.