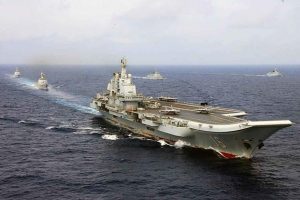 As China attempts to assert herself on a global stage, Japan has been increasing her efforts to ‘stand up’ to her billion man strong neighbor, for as Business Insider reports, China sent an aircraft carrier between Japanese islands to which the Japanese responded by sending a destroyer to follower her.

Japan has sent destroyer JS Suzutsuki, a P-1 maritime patrol aircraft and a P-3C anti-submarine-warfare patrol aircraft to “gather information and monitor the movements of the Chinese vessels,” the joint staff said in a statement published on Sunday.

This is the first time the Liaoning is known to pass this waterway since April last year. It follows military exercises the US conducted with allies in the region, including a two-day joint drill with the Australian navy in the Eastern Pacific last week, and the US aircraft carrier Theodore Roosevelt CSG entering the South China Sea on Sunday morning after a joint-exercise with the Indian army.

The Liaoning crossed the same waterway in June 2019 and December 2016.

The law came into effect in February and allows China’s quasi-military force to use weapons against foreign ships that Beijing sees as illegally entering its waters.

In early March, Japan’s coastguard said China’s coastguard had expanded its presence in the contested waters by entering twice a month and as frequently as twice a week near the Japanese-controlled Diaoyu Islands, known in Japan as the Senkaku Islands.

The joint staff office of the Japanese Defence Ministry published photos of the six Chinese vessels in the Liaoning carrier group on Sunday. The statement said they were heading toward the Pacific Ocean.

The new United States administration under President Joe Biden has reaffirmed a pledge to oppose any unilateral action that threatens to undermine Japan’s administration of the islands and that the US is obliged to defend Japan should its territories come under attack.

Last week, China’s Defence Ministry urged Japan to stop making provocative moves and refrain from attacking China over the disputed islands after the defence ministries of both countries held a virtual meeting last Monday. The meeting was for maritime and air liaison communication, a mechanism created in 2007 to improve trust and cut the chance of military miscalculation between the two countries. (source)

If Japan is stalking Chinese ships crossing into and near their waters, it is obviously and directly being done with American assistance.

Likewise, this is not new, for the US ha been provoking China for a long time in similar ways. It will be a common trend to watch for more and open examples of this kind of quiet provocation take place as relations deteriorate between China and the US and Japan.

While China may be large and a threat though, she has a lot more issues. China can stalk Japan more easily because of her regional status, but is not and currently cannot doing such say off the coast of Hawaii, Alaska, or in the Caribbean. Even if she was to do this, it could be disastrous for China’s attempts at a military rise, for she has to face off against not just the US and Japan, but will be facing significant internal rebellion and also have a major fight against the Indians in the Himalayas.

China may be powerful, but she is a lot weaker than what she presents herself as, she knows it, and while she wants to assert herself, she will try to be careful, lest as history in China repeatedly shows, she dies by her own hand again and falls to the cycle of revolution that has defined Chinese history for so long.

If True And In Large Number, Then Saudi Arabia May Need To Prepare To Be Kebobed By Her Ottoman Neighbor
Study: Two-Thirds Of US Catholics Support Biden Receiving Communion Blasphemously
Follow