You are here: Home › Russian Newspaper: Serbia Is Not A Reliable Ally, Russia Is Isolated 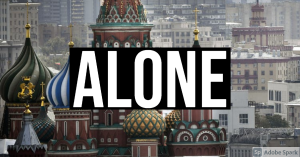 When I write about Russia, one of the observations is that she really has few to no allies, and the reason for this is not because ‘the world hates Russia for no reason’, as some believe or have promoted, or because Russia is “Christian”, or because nations are jealous of her, or because of ‘NATO propaganda’. The main reason is because of about a century of policies and their natural consequences.

If one looks at the difference between the US/NATO and the USSR, and putting aside what one or the other did in terms of actual destruction or wars, we can get a hint at an answer in their handling of economic policies. Countries in the US/NATO area of influence, proportionately speaking, had a lot more prosperity, opportunity, and general less misery while those in the USSR had elevated levels of poverty and misery with lower levels of opportunity. The answer here is not a simple “capitalism vs. Communism” explanation, but that the US aggressively pursued policies to facilitate free trade and idea exchange so that, from an economic view, she could make money, and in doing so be able to also consolidate power, and it worked well. Russia also looked to consolidate power, but did this first without requisite economic development, or if she did do economic development it was often poorly done, the people in it were underpaid, and a lot of wealth was stolen or mismanaged. Even today this pattern continues, for as one person put it, the reason why so few Russians start businesses is not because of a lack of desire, but that profitable businesses are easily and quickly stolen or forced into pay extortionate bribes to local, very wealthy and Kremlin-tied businessmen who suck the profitability out of these ventures and eventually sometimes just seize them. This happens in the US too, but it is far frequent, and as such, the motivation to build something that may likely be stolen or destroyed with no ability to protect oneself is a serious concern.

As such, in Russia there are many billionaires, but a mass of people who are miserably poor. There are many poor people in the US too, but also people of many different income tiers who have a hope of bettering their lives. This is the real reason- it is not because of a love of the US, or a mindless hate of Russia. It is that, if past trends are the best indicator of future actions, then Russia represents a likely future of poverty and a repeat of the Soviet experience, while the US, for all her problems, offers some money. Both nations will abuse the others, but the US will help clean some wounds after, and offer a piece of cake and a drink, while Russia will offer nothing except demands for more abuse with no reciprocation.

Thus it does not come as a surprise that Serbia, regarded as one of Russia’s last allies, is now being regarded in an interview on Pravda as ‘untrustworthy’, and said that as such, Russia is ‘alone’ again.

In fact, they could have done. But they didn’t. Because power was in the hands of Yeltsin and Kozyrev, who did not think about Russia’s national interests. The Americans played their game. And we are naive fools, thanks to whom America destroyed Yugoslavia. Further events were tragic in nature. The disintegration of the Federal Republic of Yugoslavia took place. Montenegro today is a NATO member, there is a regime hostile to Russia. And Serbia is the only one that remains pro-Russian.

– They are not 100% pro-Russian. Anti-Russian sentiments are strong there.

– I would like to mention the type of conflict. Part of Yugoslavia, Kosovo, rebelled. And in violation of the norms of international law, NATO carried out an operation that it called “humanitarian intervention.” Blatant intervention against a UN member. And no one condemned. Well, Primakov turned the plane around. And then what?

The Serbs are a people close to us, but, unfortunately, they did not save the country. There is a dangerous erosion of national identity. Sooner or later they will be drawn into NATO. Because there is an atrophy of national memory, national humiliation is perceived in a completely different way.

The fate of Milosevic, the victim of aggression, who was made the scapegoat for the American and NATO bombings, is very indicative: what happens to leaders who cannot create a strong army, defend the interests of the country, and then a color revolution occurs.

Support can be expressed to the Serbs, but that country is no longer there, there is no regime friendly to us. Irreversible processes are taking place that cannot be reversed.

If 100-300 years ago, having lost the war, it was possible to win in the next war and restore what was lost, today it is impossible.

The disintegration of states is reinforced by the fact that their “fragments” enter NATO, and it is impossible to return them to the fold of the former large country. For example, the Baltics. Three NATO countries:

Lithuania,
Latvia,
Estonia.
Previously, they were an integral part of the Russian Empire, then the Soviet Union. Now try to claim these territories. These are the features of the current geopolitical situation. Therefore, it is impossible to surrender part of your country. She will be lost forever. Therefore, any separatist insurgency must be suppressed as harshly as possible. We had problems in the North Caucasus. Separatist insurgency and the weakness of the federal center. Then with a lot of blood it was necessary to restore the lost positions. (source)

This fragment, taken from a larger interview, summarizes many of the problems in Russia, including her approach. As the Decline of Russia project predicted over a decade ago, Russia is going to- and it has been confirmed -take a very aggressive approach to keep her former territories and possible breakaway regions under control. However, this is fighting a natural course of dissolution, not that dissolution was inevitable, but it was the product of bad Soviet policies followed to their natural conclusions, and with no serious efforts made to reverse the negative effects.

As the interview notes, a lot of territories have been lost, but it did not have to happen like this. In fact, if the US did what the USSR did and the USSR did what the US/NATO did, the result would be same but for the opposite entities- Russia would rise and the US would fall. This is not an issue of magic or secrecy, but reality. It is also not to ignore the degeneracy that exists, but to put all things into a real context.

Russia is in decline. She knows it, and she is trying to take her historic, autarchal approach to save herself, this time by going into the Arctic. However, as she is forced to deal with the realities of bad decisions more, it may come to pass that no amount of bluffing will be able to save her from her mistakes.