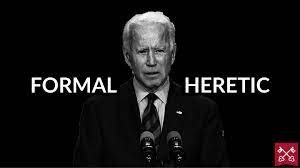 Years ago, I had a conversation with an astute and serious Catholic friend who worked as a missionary. He said that in his estimation, about 60% to 70% of American “Catholics” were not Catholic at all, but formal heretics or apostates. I never forgot his estimations, as they have consistently shown to be correct for now.

Thus it is not a surprise that a recent study showed that 70% of US Catholics said they would support Biden receiving communion.

A new poll from the Pew Research Center found that an overwhelming majority of American Catholics believe that despite his support for abortion, President Joe Biden should be allowed to receive communion.

Biden’s outspoken support for abortion puts him at odds with the official teaching of the Roman Catholic Church, of which he is a member. The Catholic Church teaches that abortion is “gravely contrary to the moral law.” In a 2004 memo to then-Washington, D.C., Cardinal Theodore McCarrick and Wilton Gregory, who served as Bishop of Belleville, Illinois, at the time, Cardinal Joseph Ratzinger, who would later become Pope Benedict XVI, outlined the factors that determined an individual’s “worthiness to receive communion.”

“Regarding the grave sin of abortion or euthanasia, when a person’s formal cooperation becomes manifest (understood, in the case of a Catholic politician, as his consistently campaigning and voting for permissive abortion and euthanasia laws), his Pastor should meet with him, instructing him about the Church’s teaching, informing him that he is not to present himself for Holy Communion until he brings to an end the objective situation of sin, and warning him that he will otherwise be denied the Eucharist,” he wrote.

“When ‘these precautionary measures have not had their effect or in which they were not possible,’ and the person in question, with obstinate persistence, still presents himself to receive the Holy Eucharist, ‘the minister of Holy Communion must refuse to distribute it,’” the memo continued.

Biden’s position led a priest in South Carolina to deny him communion as he campaigned in the state ahead of the 2020 Democratic Party’s presidential primaries. There is division among American Catholics about whether Biden and other Catholic politicians who support abortion should receive communion.

According to the Pew poll, which was released Tuesday, 67% of Catholics disagree with the idea that Biden should be denied communion, while 29% believe that his support for abortion should prevent him from receiving the sacrament. A majority of Catholic Republicans and those who lean Republican (55%) believe that Biden’s support for abortion should disqualify him from receiving communion, but their view is canceled out by the 87% of Catholic Democrats and Democrat leaners who feel otherwise. (source)

Thus these numbers do not come as a surprise. Recently, I reported on that another study found that for people under 40, only 36% went to any kind of formal religious services, and I estimated for Christians, attendance may be 30% or lower. This study, while not absolute, would suggest such numbers as I have estimated above, as those who attend religious services now, regardless of religion, are the ones at this point who care while the others are at this point for all practical purposes secularized into the larger society.

The number of US Catholic who support giving Biden- who is living in arguably open apostasy -communion is not a surprise. These numbers will also decrease as the Boomer generation dies off, which will correspond to a subsequent statistical decrease.

Thus the numbers in themselves, while very bad, are not actually too much to be worried about, since this was known for years and clear to people who were honest with themselves. They have been covered up for far too long, and the truth is finally coming out, and it is going to affect more than just Catholics, for the Catholic situation is just the start, as, the problem compounds among the Protestants, where in the US, religion is arguably an extension of nationalism and cultural ideas. Thus the Catholics will be significantly reduced but survive, while there is a strong chance that Protestantism, having the same issues but lacking the grace and promise of Sacred Scripture, will secularize to the point of a relic of the historical past.

In the centuries-long fight between the secular and ‘American religion’, it seems as though the winner has been determined- the secular world, and with people voting through their feet. What will be interesting to see now is what the future holds for the Church, or as she will remain the largest religious bloc, but as there will be no political advantage to supporting her, and given the US tendencies towards ‘disliked’ groups, she may find herself experiences a historically unprecedented level of persecution in the future.