You are here: Home › Prosecution Against Maxwell Releases Three MILLION Documents As Evidence 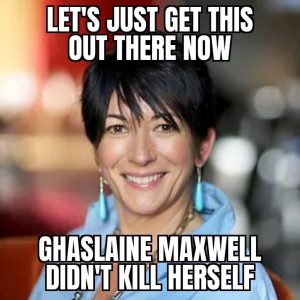 The Epstein case is a very serious one because Epstein ties major power players of all political parties, major businessmen, and other influential or powerful people to what appears to be a sexual abuse-human trafficking-blackmailing ring sort of setup on behalf of major intelligence agencies. Now as Epstein’s literal partner in committing crime, Ghislaine Maxwell, as she is in court, is having three million documents submitted against her.

Ghislaine Maxwell’s prosecutors have disclosed 2.7 million pages of evidence to her lawyers in her Jeffrey Epstein trafficking case, a court filing has revealed.

The British socialite is awaiting trial in July on allegations she groomed underage girls for the New York financier to abuse.

Maxwell, a friend of Prince Andrew, denied the original allegations and is expected to enter a plea to a new indictment containing claims from a fourth victim later this month.

Her lawyers have repeatedly complained about her not having enough time to work on her case while in jail at the Metropolitan Detention Center, Brooklyn.

Now prosecutors have revealed the full scale of the mountain of evidence in the case, which stretches to within a stone’s throw of three million pages.

A letter by U.S. attorney Audrey Strauss reads: “As the Court is aware, the Government has produced to the defendant more than 2.7 million pages of discovery pursuant to the Government’s various discovery obligations.”

The revelation emerged as the prosecution objected to a subpoena submitted by Maxwell’s lawyers to Boies Schiller Flexner (BSF), the law firm that represents Prince Andrew accuser Virginia Giuffre and a number of other Epstein victims.

Her team wants the disclosure of personal information from victims but the prosecution objected to the legal process the defense team has used.

Her court filing read: “As noted above, the BSF subpoena appears to call for a substantial amount of sensitive personal information about victims.

“For instance, according to the letter from BSF, the subpoena to BSF requests the ‘original, complete copy’ of a victim’s diary.

“To the extent the defendant has obtained or will obtain sensitive information about victims or witnesses, it should be treated as ‘confidential’ under the protective order much like other such information in this case.”

Maxwell’s lawyer complained in November that she was not being given enough time to prepare her case while in prison, as they launched a bid to get her bail.

A letter to the court, seen by Newsweek, read: “However, given the voluminous discovery in this case, the most recent production alone being 1.2 million documents, the time accorded Ms. Maxwell remains inadequate for her to review and prepare the defense of her life.”

The new indictment filed last month claims Maxwell was “discussing sexual topics, undressing in front of the victim, being present when a minor victim was undressed, and/or being present for sex acts involving the minor victim and Epstein.”

She had denied previous charges and is expected to enter a plea later this month. (source)