You are here: Home › Random Migrant Kid Found Wandering At The US Border Is The Real Face Of Political Bickering

By Andrew Bieszad on April 6, 2021 in Featured, General, Highlight 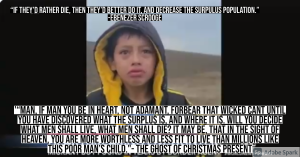 While the world watches crises in Europe and Africa, on the southern border of the US, the current migration crisis under the Biden administration continues to unfold, as The Right Scoop reports that per ABC News, a migrant child was found by a border patrol agent alone and wandering, having no parents he came with and been abandoned by his group.

This video shown on @ABCWorldNews Tonight of this ten-year-old boy abandoned in the desert is heartbreaking. This is the crisis that the Biden administration has wrought and they want to see happen.

It's a humanitarian tragedy that these are the conditions kids are subjected to. pic.twitter.com/NSeTLEZysv

ABC World News Tonight aired this video of a young child at the border begging for help from the border patrol agents who found him.

The report says they found the kid just wondering around by himself in the desert near the border, crying and asking if they could help him. He told the agents that he was scared that he could be robbed or kidnapped.

He wasn’t traveling with this parents, but rather he was traveling with a group of migrants that abandoned him. Luckily, he was found by our unsung heroes at the border and taken into custody. (source)

Look at this kid. I don’t care what your politics are, because this is what it is about, and no, this is not a plea to “open” or “close” the border.

Who is this kid? He’s somebody’s kid, and here he is, probably a thousand miles from home, with no idea where he is going or what is going to happen to him.

I really do not want to get on the “this is the face of US policy” side, but in a limited sense, I have to, since this kid’s situation is largely the result of the hyperpoliticization of the border with no respect for the humanity of the people it affects.

Don’t get me wrong- I’m not saying his parents lack culpability. They do have such. What I am saying is that the border issue is entirely fixable, and open or closed, it’s a simple matter of clarity on rules. Whether more migrants are allowed in, or all are restricted, what is needed for all is a clear answer as to how the border operates. Instead, it has been politicized, resized, distorted, and abused horrendously for political gain on both sides with no regard for the humanity of the people. Biden, Trump, Obama, Bush II, and before are guilty of this. Trump in particular holds a special place of guilt because regardless of what one thinks of him, Trump made it a cornerstone promise of his 2016 campaign that he was going to at least make good progress on fixing the border issue, similar to Obama’s promise of socialized medicine. However, the difference is that Obama, love him or hate him, made good attempts to realize his promises, and he did get a lot of what he wanted, while Trump’s promises were nothing more than politically expedient lies.

Instead, the border issue remains unsolved. Biden is exploiting the border potentially worse than Trump has, showing absolutely no regard for the welfare of both citizen as well as migrant. Migrants, as I pointed out, are often poor, scared, sad people fleeing the hopelessness of what is Latin American poverty and US vs. Russian proxy wars between right and left wing political factions that takes place in those nations. For them, a fifteen-hundren mile trip- like with the Central Asian peoples to Russia -is their passport to hope and a better life. Citizens too who live in the border regions also have legitimate complaints about criminal activity that, while most migrants are not criminals at all, has come from certain groups within the migrants and is not dealt with, and is a grave threat to public safety.

The concern for both groups are ignored. Instead, words are spoken but the rule of the day is political expediency.

Then you have this kid.

Where does he go?

Is it his fault that he exists where he does, and is put in the situation he is in?

Who will care about him, as a person?

The Democrats and Republicans will, of course, in proportion to how much he is politically exploitable for their ends, before being thrown away for the next more exploitable person or cause.

That is the real cost, even if he may die.

But, to quote Dickens, “If he would rather die, then he better do it, and decrease the surpulus population.”

After all, what could be more American, given the national history of eugenics?